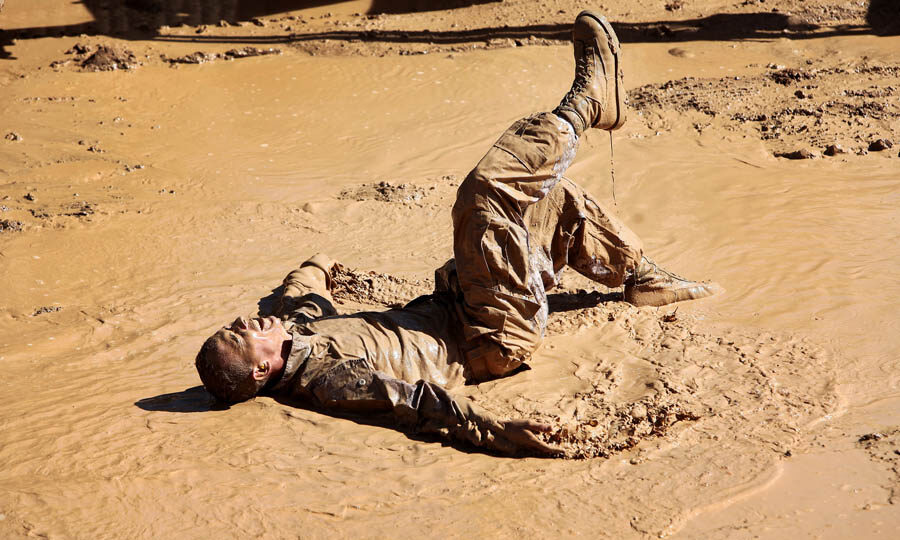 Lance Cpl. Justin Rhodes, a vehicle recovery operator with Combat Logistics Regiment 2, enjoys the mud on Camp Leatherneck, Helmand province, Afghanistan, Feb. 3, 2013. The Marines were on a range at Camp Leatherneck when Rhodes' fellow Marines dared him to roll in the mud.

I was in New York City on Sept. 11, 2001. Friends of mine suffered PTSD for months from watching New Yorkers fall from the sky and splatter right in front of them. A holy and learned priest I know, Fr. George Rutler, was hearing confessions in Tower Two. Then he got called out to the street to administer Last Rites to a fireman. It preserved his life, as the Tower collapsed behind him instead of on top of him.

I will never forget the smell that hung over our city for six long weeks, of incinerated buildings and thousands of corpses. We walked around like zombies, unable to process what had really happened to us. And wondering whom to blame. (The real answers, incompetent US intelligence, lazy airport security, and Muslim revenge for U.S. meddling, quickly vanished from sight.)

We Decided to Hold Back the Tides

So of course I supported the U.S. invasion of Afghanistan, to seek out the author of this military attack, Osama bin Laden. But I didn’t get on board with the Bush Administration’s overall strategic response to the attack. That’s because it was wrong-headed, delusional, and built on a series of happy-sounding lies.

The only way to transform a Muslim culture is to convert it to Jesus Christ. Period. And that is not a task for the United States military.

From day one, Bush declared that al Qaeda, terrorism, jihad, and other threats we faced were alien to Islam — perversions, hijacks, distortions of a lovely “religion of peace.” He gathered friendly imams his oil industry pals likely had on speed-dial and publicly declared all this.

And none of it is true.

The Ultra-Nationalist Fantasy That Captured the GOP

As soon as we launched our necessary attack on the country that harbored our deadly enemy, I wrote that we should keep it focused, ruthless, and brief. We should find bin Laden, replace the Taliban regime with the once-popular — and sane — Afghan monarchy, and bring our soldiers home. But that wasn’t the Bush plan, not even close.

As the Iraq War and Bush’s policies on immigration went on to prove, our national strategy rested on three provable falsehoods.

These three assertions totally dominated GOP circles in 2001. Those of us who disagreed, like Pat Buchanan, Robert Novak, and various “paleocons” linked to Chronicles Magazine were out in ideological Siberia. National Review smeared us as “unpatriotic” for doubting that exported Americanism could (or even should) dissolve every other culture in the world. Or that Americans had a God-given mission to morph every human being on earth into our own image.

In early 2003, I published my most prescient essay, “America the Abstraction,” warning against such unhinged national hubris. Nobody listened.

In service of this insane, impossible mission based on sophomoric wishful thinking, we went to war. Not just in a narrow mission to punish our deadly enemy bin Laden, but in two vast Children’s Crusades. The Holy Grail we sought? To totally remake two Muslim nations whose DNA was fixed by Islam a thousand years before the US was even founded.

We thought we must liberate Afghan women and homosexuals from the roles to which their own religion consigns them. In countries that had never had democratic governments or religious freedom, we must “pay any price” in treasure and blood to impose Western-style regimes. We would be “welcomed with flowers” when we marched in, the neocons promised — while staying personally far, far from the face of battle.

We Failed. Our Brave Troops Died for Nothing

We saw how utterly the invasion of Iraq failed. On the pretext of terror weapons that never existed, we shattered that fragile country. We dissolved its army and liquidated its whole structure of government. That unleashed ancient hatreds of Sunni for Shi’ite, Shi’ite for Sunni — and both brands of Muslims for Iraqi Christians, Yazidis, and other helpless minorities.

Let’s be blunt: We enabled genocide, which our soldiers were ordered not to interfere with. Three-fourths of Iraqi Christians whose ancestors welcomed the apostles were “ethnically cleansed,” either killed or made refugees. They became the scapegoats for every foolish, careless, cynical decision American neocons imposed on a faraway country. Too much like Jesus, they bore our sins.

The Neocons Gave Us the Obama Court, and Same Sex Marriage

The neocons’ promised Utopia turned out such an earthly Hell that Barack Obama was able to sweep into power, and quickly abandon the place to ISIS. That group of particularly sociopathic sharia advocates upped the genocide ante. It even created computerized databases of non-Muslim sex slaves. To this day, Iraq has not recovered from the chaos. But hey, at least Iraq is a tacit ally of our enemy, Iran.

Nor have American Christians recovered from all the corrupt decisions of the Supreme Court Obama could pack with leftist activists. Jack Philips, Baronelle Stutzman, and millions of unborn children since aborted can thank the reckless fantasies of our party’s John McCains.

Nor has Afghanistan been transformed into a peaceful, tolerant suburb. It turns out that the Taliban better represents the aspirations and faith of Afghan citizens than the unspeakably corrupt, papier-mâché regime our brave servicemen and women fought to prop up. As ugly and bloody as the process will prove — and we’ll read countless horror stories in coming weeks — no other outcome was ever possible. And the GOP leaders who sent our soldiers there, and recruited those hapless translators and other US collaborators, knew it. Or should have known.

The only way to transform a Muslim culture is to convert it to Jesus Christ. Period. And that is not a task for the United States military.

Donald Trump took over the GOP on the strength of popular revulsion at our party’s elites and their cynical lies. In office, he tried to rescue Americans from the inexorable collapse of our futile efforts in Afghanistan. Insubordinate officers still married to neoconservative fantasies frustrated him, so now Joe Biden gets credit for plucking our last few fighting men from the sinking ship. For taking Trump’s plan and finishing it.

Which Republicans Would Do It All Again? Watch Closely

Any Republican who today tries to blame America for pulling its last soldiers off that vast national Titanic now sinking back into the Muslim sea is making you a promise: Put him in office, and we’ll invade more Muslim countries, then try to bomb them until they magically turn into New Hampshire. Elect him, and he’ll welcome millions more Muslim immigrants, on the fantasy that eating at McDonald’s and surfing Tindr will transform them into religiously tolerant patriots.

Pay close attention in coming days. Take notes. We need to know which Republicans intend to draft our sons and daughters and ship them off to die for nothing. Or worse, for the crass caricature of American patriotism that powerful legacy neocons (Liz Cheney, Condoleezza Rice, Nikki Haley, Lindsay Graham, Mitt Romney) are still trying to foist on Americans.

Invade the world, invite the world. How’s that working for us?