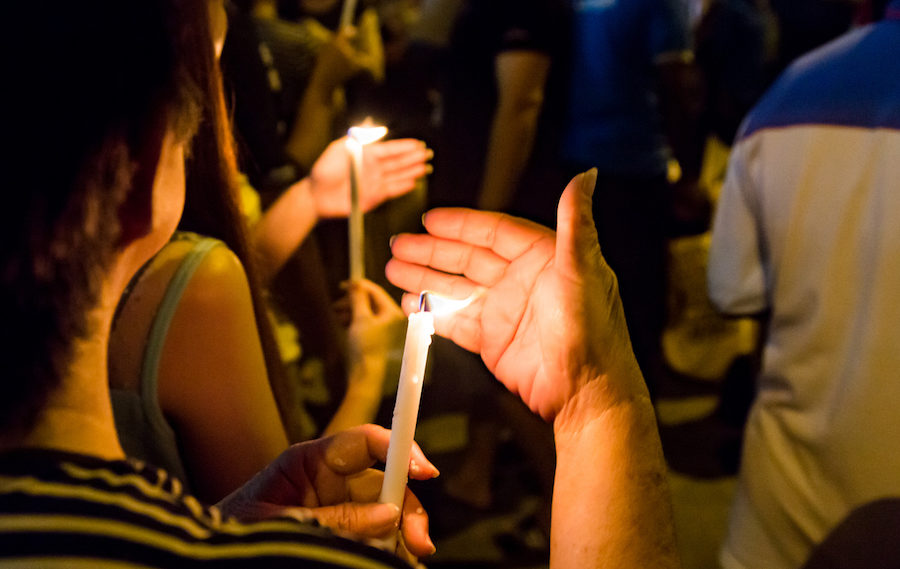 It’s heartbreaking to watch. On Twitter, one Jewish American after another weighs in. They’re responding to the spate of anti-Semitic attacks in the New York area. The worst, of course, was a machete rampage at a rabbi’s home. As the New York Post reports:

Police have identified the man accused of entering Rottenberg’s Monsey, New York, home during a Hanukkah celebration and stabbing five Hasidic Jews with a machete, as Grafton E. Thomas, 37, of Greenwood Lake, N.Y.

The motive is now beyond question. Again, via the Post:

The New York man accused of stabbing five people at a rabbi’s home during a Hanukkah celebration this past weekend was charged Monday with federal hate crimes as details are emerging about a series of handwritten journals found at his home that the FBI says appear to “express anti-Semitic sentiments.”

This bloody assault by a black leftist may be the ninth such attack on Jews in just the past two weeks in New York, police report. Several of the attackers seem to be linked to the “Black Hebrew Israelite” movement. A far-left black movement, it claims that Africans are the real descendants of Abraham. Its members were the thuggish bigots who mobbed Nick Sandmann and the Covington Catholic boys for hours after the March for Life. You might not remember them. They somehow escaped mention by most mainstream media.

One Jewish commentator after another whom I respect has vented his shock, outrage, and fear. They’re weighing the idea that maybe Jews aren’t safe in New York City. Of all places. As a native New Yorker, that prospect stuns and sickens me, too. It reminds me of the danger French Jews face from Muslim radicals, which is driving many to pull up stakes and move to Israel. Let’s not forget how alarmed British Jews were by the rising anti-Semitism of that nation’s mainstream left.

Can It Happen Here?

A sobering reminder here. Countries that were once famous for venerable, thriving Jewish communities include all of the following:

In each of those countries, bigots either murdered or drove out virtually all of the nation’s Jews between 1933 and 1948. The fact that we’re even having to talk about anti-Jewish attacks should mortify all Americans.

But not everyone is mortified. Or at least, they have a funny way of showing it. Left-wing writers, some of them Jewish, have been weighing in to divert the blame from the hateful ideology of the attackers and New York Mayor Bill de Blasio’s lax law enforcement to … the usual suspects.

President Trump, of course, for promoting “division,” even by his pro-Jewish and pro-Israel policies. Jewish “gentrification” of historically black neighborhoods. Economic “inequality,” “white privilege,” and a so-called “war on people of color,” which boils down to policemen policing crime-ridden neighborhoods.

Bill de Blasio says giving people like Tiffany Harris, who slapped 3 Jewish women in the face and shouted “F–k you, Jews!,” 2 debit cards and a *burner cell phone* upon release is not “soft on crime.” If they attack more people on bail, it’s “missing the forest for the trees.” pic.twitter.com/jI0pp4XrH2

What is it that drives otherwise rational, educated people to ignore empirical reality and scorn reasoned discourse? Most of the time, the answer is simple: bad religion. And a very bad religion indeed has taken hold of much of the West — the post-Christian heresy of Intersectionalism.

I’ve explained here before how this Victimist cult replaces Christ with ethnic, cultural, or sexual groups. Then it worships them instead. Replacing a personal devil, it blames “the privileged” for every evil in life, and racist conspiracies for social inequalities. How could a theory like that possibly harm the Jews, am I right?

What else could we call it but a religious delusion that leads smart people to torture their minds into accepting transgender madness such as this:

The Christological debates at the post-Nicene councils were less paradoxical, and much more evidence-based, than this kind of gibberish. But leftists willingly batter their brains into believing in “pregnant men,” and enjoy in return the endorphin rush of self-righteousness.

Plus the chance to join the mob when it attacks some hapless liberal like J.K. Rowling for daring to question dogma. Not for nothing did gay centrist writer Andrew Sullivan call the Intersectionalist cult “the new Puritanism.” Of course, that’s deeply unfair — to the comparatively tolerant and much more rational Puritans.

Your Own Private Heaven on Earth

If endorsing patent nonsense is part of false religion, so is avoiding reality. Pretending that you can wish away the stubborn evils of the human condition via virtue-signaling, media messaging and clumsy legislation.

Think of the well-funded elite movement to deprive Americans of their Second Amendment rights. People who believe in “menstruating men,” who won’t criticize “Black Hebrew Israelites,” are also prone to believing in happy fantasies. Such as “gun-free zones.” In fact, they hope to make our entire country such a zone. A vast country with de facto open borders, and lax law enforcement. Where only the government and its agents wield deadly force. Does that sound safe to you?

David Harsanyi at National Review points up the stark reality from which leftists screen themselves with the pink fog of rhetoric and “righteous” preening.

The same weekend that Orthodox Jews in Monsey, N.Y., were fighting off another knife-wielding anti-Semite thug with chairs and coffee tables — they were fortunate that the perpetrator hadn’t brought a firearm, like the killer who targeted a yeshiva in Jersey City only a few weeks earlier — Jack Wilson, a 71-year-old congregant and security volunteer at West Freeway Church of Christ in White Settlement, Texas, took mere seconds to stop a potential mass murderer.

Earlier in the year, to the dismay of the usual suspects, Texas governor Greg Abbott had signed a bill making it explicitly legal for Texans with concealed-carry licenses to bring their weapons into places of worship. Thus Wilson was able to achieve something that no gun laws now being pursued nationally by Democrats has ever accomplished: He stopped a mass shooter. My guess is that Wilson, a former deputy sheriff, is the kind of guy who probably wouldn’t have broken the law and carried a firearm into church had it been illegal to do so. The killer, on the other hand, I’m wholly certain, would have been undeterred by any laws.

Talk this way, and Intersectional believers — some of them in control of our actual Christian churches — will start to lose bladder control. They won’t look at facts and figures. Or argue over principles, such as every person’s right to defend himself and his family. Or the track record of the modern state in tyrannizing and slaughtering disarmed populations, to the tune of almost 200 million between 1914 and 2000.

That’s not how you deal with blasphemers. Instead, you form mobs and stone them.