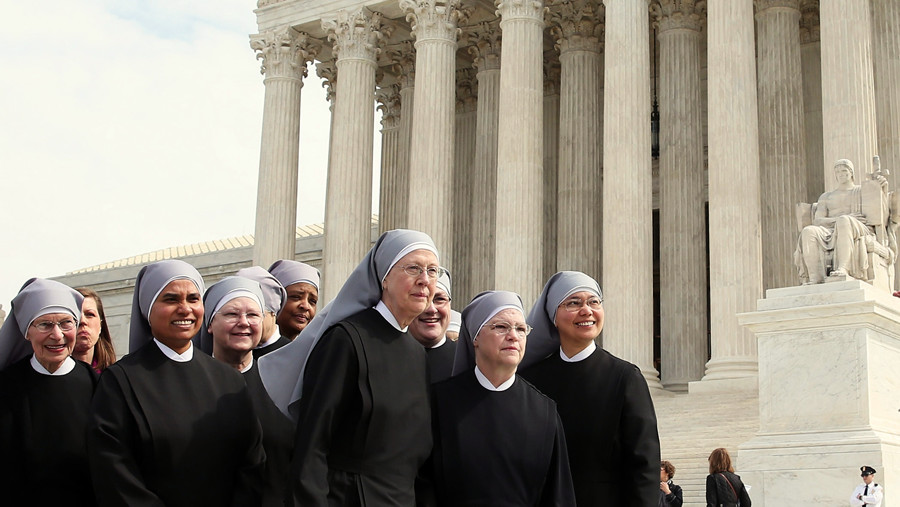 File: Mother Loraine Marie Maguire, (center), of the Little Sisters of the Poor, walks up to speak to the media after arguments at the US Supreme Court, March 23, 2016 in Washington, DC.

The founders of America would be aghast at today’s assault against religious freedom and against what they called “the sacred right of conscience.”

Right now a group of innocent nuns is in the Left’s crosshairs — again. Why? Because the Little Sisters of the Poor do not believe in contraceptives and cannot in good faith and conscience abide by the HHS mandates — left over from the Obama administration — to force them to provide coverage for them.

Headed to the Supreme Court Again?

The case went all the way up to the Supreme Court in 2016, and the high court said the nuns did not have to comply. A further executive order was issued by President Trump to protect the Little Sisters and similar groups from the contraceptive mandate. But the Left has continued to find loopholes — and friendly judges — in their crusade against religious freedom.

A recent adverse ruling from the Third Circuit Court of Appeals now means the nuns must once again appeal their case all the way to the Supreme Court.

First Liberty noted that the Third Court of Appeals’ ruling “manifests an aggressive effort to compel the religious objector to assimilate with popular secular beliefs.”

First Liberty Institute, a Texas-based group fighting for religious freedom, just submitted a friend of the court brief on behalf of the nuns.

First Liberty noted that the Third Court of Appeals’ ruling “manifests an aggressive effort to compel the religious objector to assimilate with popular secular beliefs.”

Who exactly are the Little Sisters of the Poor? Since 1839, this group of Roman Catholic nuns have been helping the elderly and poor — providing a wonderful service for those in need.

I once asked Gary Bauer, former presidential candidate, about the Little Sisters case (first time around, when Obama was the president). He told me: “This is the president that has brought the full weight and power of the federal government not against ISIS — on ISIS he’s kind of AWOL — but he’s brought the full weight and power in a threat to crush the Little Sisters of the Poor.”

Dr. Richard Land, the president of Southern Evangelical Seminary, comments: “I never thought that I would live to see the day in America, when the federal government would fine people for their religious convictions. … The idea that the federal government would come in and try to force the Little Sisters of the poor, a group of nuns, to pay for contraception and pay for abortifacients and sterilization in their health care insurance is grotesque.”

Mat Staver of Liberty Counsel said about this case: “Never before in the history of America have we told religious organizations like Little Sisters of the Poor you can do what your God-given call and mission is, so long as you participate in human genocide.” Included in the contraceptives mandate are some abortifacients — chemicals that induce abortions.

The Civil Rights of Nuns

As a student of American history, I am convinced the founders would be in favor of the nuns and not the Third Court of Appeals’ awful decision:

At a press conference during the first go around, the Little Sisters of the Poor declared: “The government forces us to either violate our conscience or to take millions of dollars that we raise by begging for care of the elderly poor and instead pay fines to the IRS.”

The founders were wary of an all-encompassing big state that decides who has rights and who doesn’t. The foundation of American liberty is our God-given rights, as affirmed in our nation’s birth certificate, the Declaration of Independence. As John F. Kennedy put it, “the rights of man come not from the generosity of the state but from the hand of God.” Amen.

But in the Year of our Lord 2019, we again find some elements of big government shamefully going after a group of charitable nuns to try to force them to violate their conscience rights.