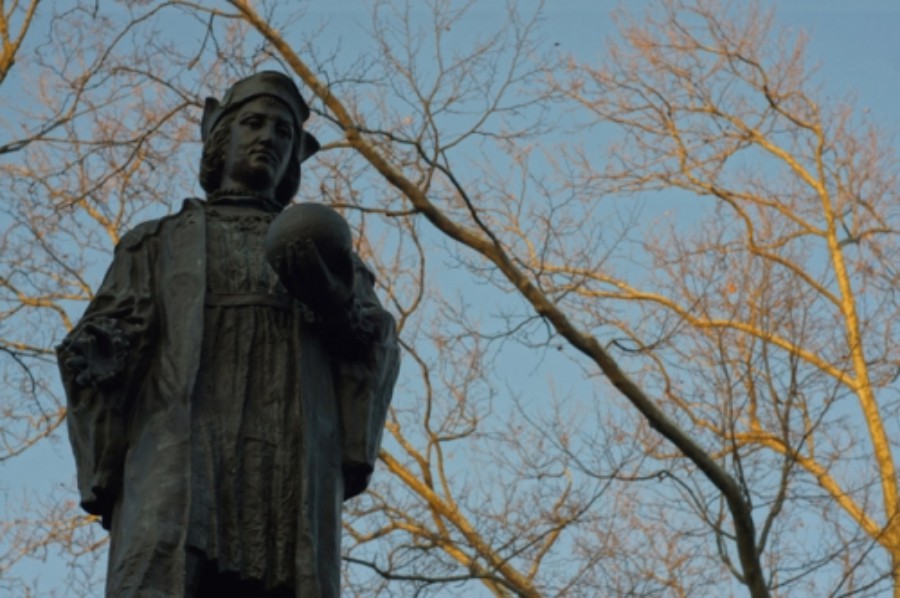 The statue of Christopher Columbus in New Haven's Wooster Square Park, before it was taken down to save from it being destroyed by a mob.

“The issue is never the issue. The issue is always the revolution.” Whatever our revolutionaries say they want, they really want to overturn the whole system. In The Stream a couple weeks ago, I pushed back against that phrase when deployed against the legitimate grievances of African-Americans.

But no phrase better encapsulates the iconoclasm now sweeping the world. That is, how totally full of it are the anti-statue creeps.

Let’s start with what really happened in New Haven the other day. Two supporters of removing the statue of Christopher Columbus came to a pro-statue protest. They wore shirts declaring “White Lives Matter Too Much,” and carried a sign reading, “Y’all left New Haven ‘cause of blacks. … Funny this is when you come back.”

I don’t support violence. I wouldn’t walk into the middle of, say, a BLM rally wearing a MAGA hat and proceed to lecture the attendees on how they support a bad cause. That would be a deliberate provocation. That’s what these two men did.

I was at the pro-statue rally myself for an hour the day it was removed, from 6 am to 7, and those were peaceful people. Only after I left did those two men show up and provoke them. You won’t see any of that context in a video, different than the one here, showing the two sides arguing afterward. But the virtue-signal crowd only share that one.

Why the outrageous murder of George Floyd in Minneapolis means we have to remove a statue of Columbus in New Haven, I don’t know. Oh, wait. I do know. It’s in the title of my post.

Am I the only pro-family activist who is noticing the similarities between the gay marriage fight and the Columbus fight? Same tactics, same stakes. The same demonic spirit at work in both battles.

On tactics, there is:

1) The gaslighting. The activists ask: “What do you lose if the Columbus statue comes down?” Not unlike “How does it affect you if two people of the same sex marry?” We quickly found out. If you say the wrong thing about gay marriage, or if you said the wrong thing on social media ten years ago, you’re out of a job. Post-gay marriage, no one should buy the gas-lighting on Columbus. This is about so much more than Columbus.

2) The rejection of nuance. Yesterday’s Jacobins rejected our point that gay persons are entitled to the same rights as everyone else, but they don’t have the right to redefine marriage. Today’s Jacobins reject the idea that Columbus discovered America, in the sense that our civilization in this hemisphere begins with him. It was a huge achievement by a great man, albeit one who is guilty of grave injustices.

3) The accusations of racism. Then, it didn’t matter that you had no animus against gay people. You don’t support changing the definition of marriage? You’re a hater. Now it doesn’t matter that you acknowledge that Columbus was not literally the first European to set foot in the New World and that he was guilty of crimes. You still credit his achievements as a great explorer, you practically have Indian blood on your hands too.

We Brought This on Ourselves

Into this vacuum rushes Cultural Marxism. That’s why it’s not just Columbus or the Confederacy that has to come down.

That’s why Washington, Jefferson, Lincoln, Grant, Teddy Roosevelt, the National Anthem, Catholic saints, Catholic churches, even some abolitionist I never heard of who died fighting slavery, all of them need to be torn down. Our civilization must first be erased, the good as much as the bad, to make way for what is coming next.

Either we stand up for our civilization or it will be replaced. “Meet the new boss, same as the old boss,” sings The Who in “Won’t Get Fooled Again.”

Except, as they could have told you in Jacobin France or Bolshevik Russia — as Christians in their corporate cubicles could tell you right now, if they weren’t terrified the H.R. Department down the hall might hear them — the new boss is not the same as the old boss.

The new boss will be far worse.