The House Impeaches a Ham Sandwich. But the Senate Won’t Bite. 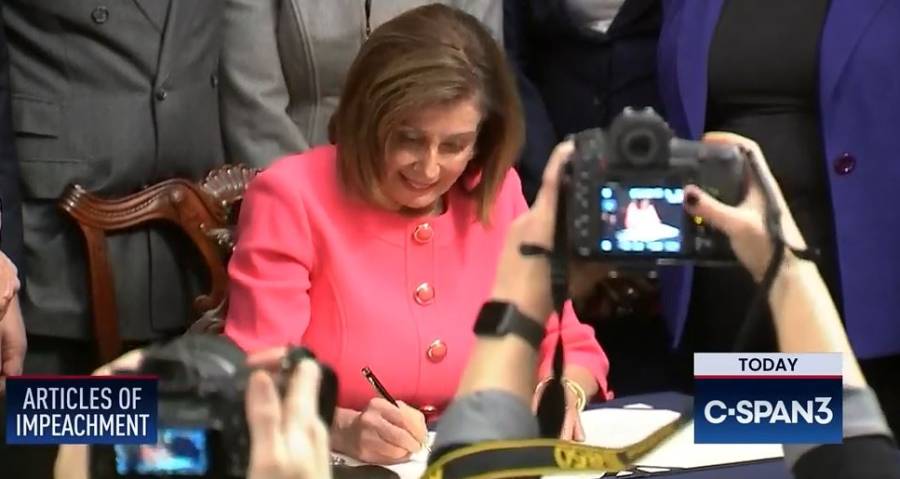 House Speaker Nancy Pelosi signs the Articles of Impeachment against President Donald Trump, January 15, 2020. Sure seems somber about it though, doesn't she?

Pelosi signed the articles, then handed out commemorative pens like candy canes to her giddy colleagues. Somber? More like a tailgate party. Talk show host Mark Simone put it best: “So tacky and clownish.”

Embarrassing spectacle – Pelosi using sterling silver platters and handing out ceremonial pens to everyone in sight, made it ridiculously theatrical and so tacky and clownish. What goofballs: #IMPOTUS #ImpeachmentDay pic.twitter.com/hvfLZTc3Vu

Then articles were carried over to the Senate like three-year-old Christmas fruitcake. Just as stale. Just as likely to be tossed in the trash.

Actually, the walk-over was a ceremony steeped in tradition. Finally, an impeachment precedent Nancy Pelosi felt like following.

Not that Nancy Pelosi really wanted to see this day. She’s smart enough to know the disaster this will be for Democrats. But she had to do AOC and the Resisters’ bidding. (The irony? While Pelosi is appeasing AOC, an AOC-connected dark money group is reportedly spending $500K to take down two top Democratic contenders, Joe Biden and Pete Buttigieg.)

And yet Nancy rolls along. On Wednesday, Pelosi crowed that this is an “impeachment that will last forever.” Like a diamond from Kay Jewelers. Not a pile of dung from the bowels of Adam Schiff’s office.

House Intelligence chairman Schiff will be leading the House Managers, in essence the Democrats’ prosecution team. This is a great move … if you’re a Donald Trump fan. Every minute of the Senate Trial, America will be reminded of just how slippery and slimy and sick the whole House show was. Adam Schiff is no champion of justice presenting a somber case for impeachment. He’s the creepy ambulance chaser in 2 a.m. cable TV ads. The guy in a Lifetime movie who has his beloved mama on ice in the downstairs freezer. The politician who doesn’t bat an eye when his pal is busted for killing off a series of black gay escorts. (Oh, wait. That one’s actually true.)

The Democrats foolishly want “more witnesses! more evidence!” Forget that the House was suppose to collect evidence. Build the case. But the Dems were so eager to impeach Trump before Christmas that they refused to do their job. This is not the Senate’s problem. Yes, their case is limper than a wet noodle. What they don’t understand is the bigger the trial, the bigger the show. And Trump is the best showman since P.T. Barnum.

And the best heavyweight fighter since Mike Tyson.

Show Us the GOP President, and We Will Find the Crime

So what is Trump being tried for? Treason? No. Bribery? No. A high crime and misdemeanor? No. Not one thing that’s actually in the Constitution.

Article One is “Abuse of Power.” You know, the same thing every Congress claims of every opposing president. In this case, Trump’s accused of wanting Ukraine’s president to look into the corruption involving Joe and Hunter Biden for his own political benefit. Biden, you see, is described as Trump’s “political opponent.” That he’s a former Vice President actually caught on tape bragging about blackmailing Ukraine to fire the prosecutor investigating his son’s corrupt company? That’s deemed irrelevant. Really? As Tom Cruise told the FBI in The Firm: “That’s more than you had on Capone.”

Also irrelevant? This same Joe Biden was Number Two in the administration that asked for Ukraine’s help in going after Trump’s campaign manager … for their political benefit.

Meanwhile, three senators voting on Trump’s fate — Elizabeth Warren, Bernie Sanders and Amy Koubachar — want Trump’s job. How will they not be acting for their own political benefit?

Erasing the Separation of Powers

Article Two is “Obstruction of Congress.” Trump didn’t want to hand over every scrap of paper and every witness Congress wanted. Attorney-Client Privilege and Executive Privilege being what they are. The separation of powers being what it is. The House could have gone to court to settle the dispute. The Constitution’s “balance of power” among the three branches being what it is. But, no.

The Democrats are the ones trashing norms, of course.

It wasn’t enough to ignore the precedents for impeachment, to make it a strictly partisan process devoid of due process in the House.

Nor to criminalize the separation of powers between the Legislative Branch and Executive Branch.

Nor even to reject the role of the co-equal Judicial Branch in settling disputes between Congress and the White House.

Now the House Democrats are trashing the opposing branch of Congress, the Senate.

First, Pelosi tried to dictate the terms of the Senate trial. She white-knuckle clutched the impeachment articles for a month, while demanding she get approval over what the Senate would do with them. Pelosi then went onto accuse Senate Majority Leader Mitch McConnell of being a Russian stooge. (Russia again? Really, lady?)

On Wednesday, House Judicial Chairman Jerry Nadler threatened the Senate. If it won’t add witnesses the House wants and accept new documents, its members are complicit in a cover-up. “The Senate’s on trial as well as the President.” (Really, when did they call Ukraine’s president?) “Does the Senate conduct a trial according to the Constitution to vindicate the Republic, or does the Senate participate in the president’s crimes by covering them up?”

“Vindicate the Republic” … says someone hellbent on overturning the will of the voting public. Or a character in an old Star Wars movie. (Nadler the Hutt.) After what Democrats did in the House, to say anything about what the Senate does takes a heaping mound of chutzpah. So why are Democrats trying to smear and stain the Senate? House Minority Leader Kevin McCarthy says that this is all about Democrats trying to win the Senate in the upcoming election.

Is This All About Roe v. Wade?

It gets you thinking. Are Democrats attempting to weaken the Senate in advance of another Supreme Court Senate confirmation battle?

The Senate Trial is expected to start next Tuesday. It’ll be interesting to see if Democrats and their media allies spend more time attacking the Senate than they do defending their evidence.

Who knows? Maybe they’ll get a commemorative pen from Nancy for their troubles.