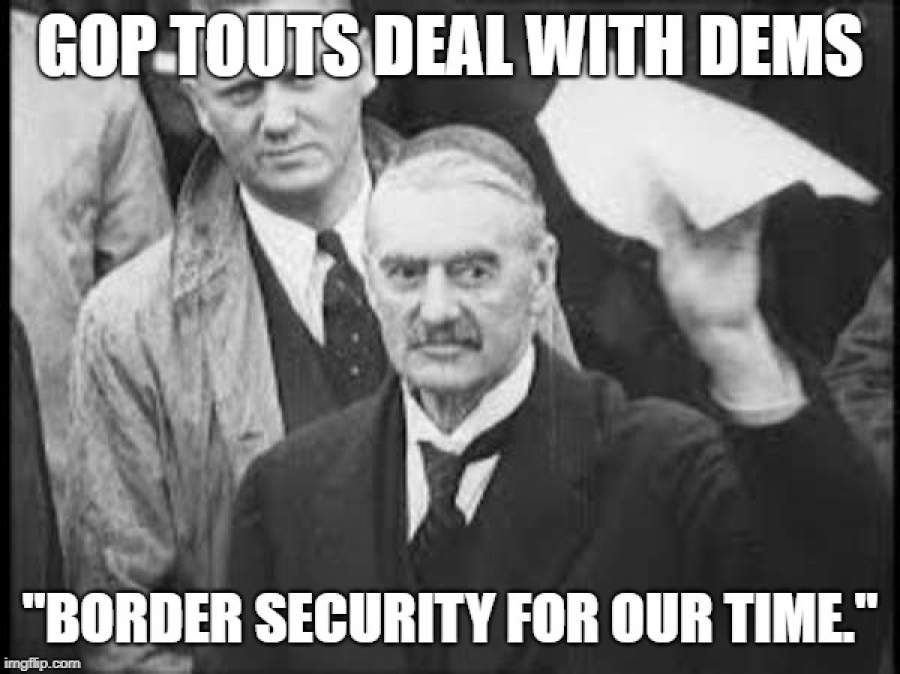 History has been unkind to British Prime Minister Neville Chamberlain. He wasn’t a coward, a traitor, or a sympathizer with Hitler. He was, like most of his countrymen who’d lived through the First World War, desperate to avoid repeating its horrors.

Like most of the British elite, he’d read and been convinced by Maynard Keynes’ verdict on the Treaty of Versailles. Namely, that it was the perfect storm of foolishness: too harsh to be fair, and too humiliating for any German government to stand by it for long. But not nearly harsh or punitive enough to keep the Germans weak. In fact, as historians have noted, the treaty legally kept the German army too small to crush either the Nazi or the Communist paramilitaries in 1932. That’s one reason von Hindenburg had caved in and accepted Hitler as chancellor.

Both a Crime and a Blunder

If the goal had been to cripple Germany forever, then the victorious Entente should have listened to the French, and divided the country. Joined the restive Bavarians and Rhinelanders to the Austrians to form one, Catholic western German state. Leave the Prussians, Hessians, and Saxons in a Protestant east. The long-standing grudges between the regions might have kept the separation permanent, and one of the nations allied to France against the other.

If they lacked the spine for that, the Entente should have shouldered its share of the blame for the war, renounced reparations, and let the Germans recover. Without carving off large portions of its territory and handing them to newly founded, weak neighbors like Czechoslovakia and Poland. Then focused on building up a flawed but non-Nazi Germany as a bulwark against the eastern, Bolshevik menace.

But thanks to Woodrow Wilson’s messianic blundering, Versailles achieved the worst of both worlds. It ground the Germans’ faces in the muck, but left them united and strong enough to seek their revenge.

The English and French had a clear military superiority up through 1938.  As Hitler flouted one provision of Versailles after another, they had ample legal pretext to invade and overthrow him. Some German generals actively hoped for this. Indeed, several plotted a coup to remove Hitler in 1938, if the Allies chose to keep their word and defend Czechoslovakia. Had they done so, they would have had a formidable Czech military on their side, with large defense industries and a mountainous, highly defensible border.

But the French were divided and deeply dispirited. The British lived in terror of air-based gas attacks on London. They still nursed traumas from the slaughter on the Somme. So when Hitler forced the issue of the German-speaking region which Versailles had handed to Czechoslovakia (the Sudetenland), Chamberlain rushed to Munich, desperate to make a deal.

Before “Appeasement” Was a Dirty Word

He returned from Munich in 1938, famously waving a piece of paper which he claimed secured “Peace for Our Time.” It gave the Germans all the Czech’s shiny armaments factories, and its defensible mountain borders. At the same time, Chamberlain ordered a desperate, last-minute rearmament drive, just in case. The planes that Churchill used to defend London from the Blitz? Chamberlain built them.

And that explains the now-tainted word, “appeasement.” It wasn’t always a term of abuse. Instead it had the same connotations as our current word, “negotiations.” As in, “The GOP negotiated with the Democrats over border wall funding in February, 2019.”

The Art of the Squeal

Do you see where I’m going with this? You can’t really negotiate with extremists, any more than you can appease expansionist dictators. Especially when your enemy stands united, implacable and determined. But your team is divided, shell-shocked, and spooked. You’ll lose every time. You’d have thought that President Trump would know that. He did, after all, publish The Art of the Deal.

The Democrats really have united their activists, donors, and deputies in the media behind a powerful, simple idea: Borders are racist, and racism is Hitler. If you support borders (for instance by wearing a MAGA hat) you’re a Nazi who might just get punched. Or at the very least you’ll see your business boycotted, your spokesmen silenced on social media, and your high school students hounded by national lynch mobs for “smirking while white.”

Meanwhile the GOP stands as fragmented and fearful as the Allies in 1938. Most Republicans know that it’s ludicrous to claim that border security is racist. White nationalists aren’t even part of the GOP coalition, while fierce Latino nationalists, Jew-hating Muslims, and antiwhite racists roam free in the Democrats’ leadership. We know that the charges the Democrats wield are false, unfair, and even insincere. But few Republicans want to take the chance of saying it. They’d rather feed Steve King, the Covington kids, and the voters to the crocodiles in the hopes of getting eaten last.

Trump had his moment, two years ago. In his first 100 days he could have demanded that amnesty champion Rep. Paul Ryan step down as speaker. He could have insisted that the wall was the promise he’d run on. Then demanded that the GOP deliver it. And forced Speaker McConnell to dismantle the fake, silent filibuster in the Senate — a paper protection which the Democrats will nuke the moment they have 51 votes and it suits them. (Meanwhile, the constant influx of a million new Democrats per year across the border almost guarantees that we will never again have 60 GOP senators. So the filibuster is a permanent Democratic veto on every bill, ever.) Or else no corporate tax cuts that benefit their donors. It would have been simple. It would have worked. But it would have taken a lot of nerve.

Just as standing by the Czechs would have in 1938.

Trump’s nerves got rattled. As anyone’s would have been. Add all of it up. The treasonous efforts of the Deep State to paint him as a Russian stooge. The plot to remove him from office. Mueller’s probe, which is imprisoning Trump’s campaign officials on unrelated charges.

So Trump frittered away the two years when the GOP ran the Congress. Then bet everything on a tactic which has failed again and again: a government shutdown. Like the French and British at Versailles, he provoked and enraged his enemies, but didn’t move to cripple them. Now Trump hopes that a State of Emergency declaration will grant him the power to build a wall, despite the Congress. If he defies various federal courts’ politicized and unconstitutional orders, maybe it will. That will amount to something. Just as Chamberlain’s rearmament efforts would in 1940. Once the war was almost lost.

A Bill Which President Jeb! Could Have Given Us

But just as Chamberlain did, Trump seems to have given away the store. If he signs the new legislation that soon will reach his desk, even a shiny new wall won’t do much good. Let’s look at this Munich peace deal which our weak-sister allies have drawn up to appease the Democrats. Mark Kirkorian, the calmest and soberest immigration hawk we have, listed the massive giveaways at National Review.

[T]he bill allows the fencing to be built only in the Rio Grande Valley Sector in South Texas. It’s surely needed there, but real barriers are also needed elsewhere, such as the parts of the Arizona or New Mexico borders where there’s only vehicle fencing.

But the Democrats had a reason for this limitation. The bill states:

In other words, local governments would have an effective veto over whether barriers would be constructed. And which party controls all local government in South Texas? Go ahead, look it up, I’ll wait. Rio Grande City is the least Democratic community in the area, and even there voters supported Hillary Clinton in 2016 by more than three to one.

No Wall, No Asylum Fixes, Nothing to Stop the Caravans

So in reality, this bill will get exactly zero miles built of the Wall. A total surrender on that front. What about the massive, gaping loopholes in our asylum laws? The ones that encourage human traffickers to snatch random children, and parents to drag their kids through lethal deserts, as “get-into-the-U.S.-free” cards?

Kirkorian notes that under this new bill’s provisions

There’s already a huge incentive to bring a child with you if you’re planning to infiltrate the border, because kids can’t be held more than 20 days, according to the Flores agreement, and we don’t separate parents from kids, so if you sneak across with a kid in tow, you’re released into the U.S.

So the next caravan, and the next, and the next, will cross the lines where the wall never got built. Even if we stop them, they’ll use their kids as instant anchor babies. They’ll vanish into the country, and wait for the Democrats to win the next election and grant them amnesty.

More Cheap Labor to Make the Ropes for Hanging Us

Read Daniel Horowitz to see the rest of the poison pills the Republicans let the Democrats slip into the fine print of this bill. As he points out:

This bill (p. 1,161) doubles the number of H-2B non-agricultural, unskilled seasonal workers who will continue to be a public charge on America. This gives you a glimpse of what is driving this amnesty bill on the Republican side. … If Trump signs this bill instead of vetoing it and firing the people in the White House promoting it, he deserves to lose re-election.

If Trump signs this Munich agreement, his strongest supporters will see that he has betrayed them. They might even launch a primary opponent to challenge him from the right in 2020. You know, like one the Jimmy Carter faced in 1980 from Ted Kennedy, before he slunk out of the White House like a fired janitor. Or which George H.W. Bush faced from Patrick Buchanan in 1992, before he vanished too.

And one more state will turn blue, every couple of years. Until the Democrats really do have the votes to turn us into Venezuela. Then the Green New Deal, or something like it, will be hailed as “prophetic” and imposed on America. Our First Amendment rights, then our Second, will vanish into the Memory Hole.

If Trump signs this bill, he will insure himself a spot in history. As the man who vainly waved a piece of paper which his enemies had dictated, promising “border security for our time.”

It was a nice country, while it lasted. A republic, but we couldn’t keep it.

I’ve said many times that immigration determines whether America will survive, and abortion whether it deserves to.

Do we have our answer now?

John Zmirak is author, with Al Perrotta, of The Politically Incorrect Guide to Immigration.