The Godfather Turns 50: What Can We Learn From These Classic Films? 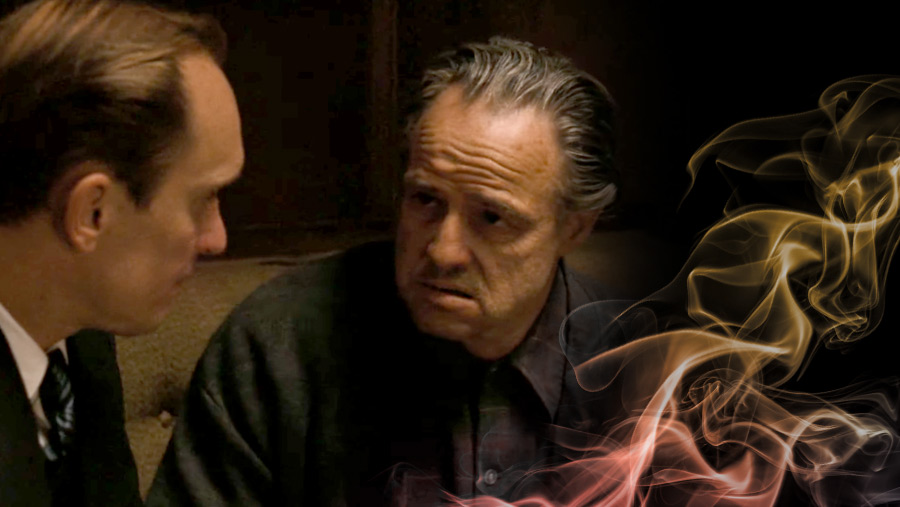 Who would have thought that a pulpy page-turner novel like Mario Puzo’s would provide the story for two of the greatest films in history — The Godfather, and The Godfather Part II? (Part III, which was dogged with casting problems, and widely panned when it opened, has been recut and streamlined into a respectable film as well, now titled Godfather Coda: The Death of Michael Corleone.)

Then again, some of the greatest films come from middlebrow or even lowbrow materials. The novel Gone With the Wind was popular, but not a masterpiece like the film. Conversely, great works of literature aren’t always amenable to adaptation for film. To really do them justice, it often requires a miniseries, like the made-for-TV Brideshead Revisited, or the resources for massive epics, like the Extended Edition of The Lord of the Rings trilogy, which totals more than 12 hours. (The theatrical versions of these three films hollowed out Tolkien’s texts, stripping them of most character nuances and turning them into chase-and-battle films.)

I re-watched the Godfather films, to see if they still held their original power after all these years. And they do. Much of that is thanks to the brilliant cinematography and acting. Coppola knew how to locate amazing talents and let them flourish. But there’s more to the films than craftsmanship. They tap into powerful themes of timeless relevance, which far transcend the movie plots — which amount to straightforward vendettas among unsavory immigrant gangsters.

The Godfather films jump back and forth in place and time, from post-World War II America to Sicily circa 1900. That works beautifully on film, but for the purposes of seeking both films’ meaning, we’re better off going in chronological order. I will supplement the films with my own knowledge of the historical background behind the story.

The Mafia Started as a Guerilla Resistance Movement

The roots of the saga lie in rural Sicily. What few non-Italians watching the film likely know is how the Mafia got started. When Italy was fully unified in 1870, the country didn’t simply pull itself together. Instead, wealthy secularists in the northern Kingdom of Piedmont managed a series of wars, to evict Austrian occupiers and holdover dynastic kingdoms. The northerners spoke a different language from the southerners, and had very different economic interests. In some ways, their conquest of the South was akin to the American Civil War, with northern industrialists rolling over southern agrarians. (For a full picture, check out the authoritative podcast Talking History, The Unification of Italy, especially the last four episodes.)

When the northerners “liberated” Sicily from its long-standing native monarchy, they treated it as a colony inhabited by primitives. They sent down secular experts, who did business in Tuscan dialect (now the official version of Italian) and scoffed at the Church — even though the clergy were deeply beloved by Sicilians. Ordinary Sicilians got treated like natives in an overseas colony. The result? A guerrilla war. Locals banded together and fought for decades, earning the label “briganti” (bandits). This resistance army devolved over time into simple organized crime, but it still retained respect among the common people for resisting “alien” overlords.

This is the background from which many Southern Italian immigrants — including the Corleone family — came, which shaped their worldview in America. While countless Italian-Americans saw America as a land of golden promise ruled by law, a significant percentage still clung to old-world networks for protection and enrichment. Thus the Italian Mafia, the heirs of briganti, took root in American cities.

The story of the Corleone family, for all its plot twists and betrayals, can be unpacked in simple terms. A family that hails from the world of briganti obtains great wealth and power obeying the old-world rules. The Corleones’ Christian faith appears to be mostly a ritual overlay, atop pagan criminality. But the Corleones do cling to shreds of authentic honor from their old culture. They will not deal narcotics, and will not betray their own. Both commitments weaken them in their rivalry with other crime families not burdened by the same scruples.

Most importantly, the Corleones wish to assimilate. Don Vito Corleone (Marlon Brando) hopes that his youngest son, Michael (Al Pacino) can leave behind the old ways of Sicilian resistance fighters, and lead the family to success as “respectable” Americans.

A Quest for Respectability

But the habits, bonds, and feuds they carry from the past keep forcing Michael to act like an old-time gangster. He feels compelled to adopt a Machiavellian ruthlessness, which drives him to order appalling acts of violence — including the execution of his treacherous idiot brother, Fredo. The third Godfather film brings this effort at seeking respectability to a climax, as Michael sells off all interests in casinos or other tainted enterprises — and tries to go into business with the Vatican. Surely that institution could offer him the ultimate imprimatur and respect.

Except that it can’t. The Vatican Bank, where Michael invests, turns out to be as corrupt as any old-time institution in Sicily. In the third film, Michael realizes that the quest for “legitimacy” and “respectability” is finally futile. Corruption prevails at every level of life in America, too, and infects the top tiers of the Church.

Throughout the films we see the “hypocrisy” that scandalizes Michael. Police captains turn out to be working for rival gangs, which are selling narcotics. The lawyer on a U.S. Senate committee investigating the Corleones … is getting paid by another gang that’s using the FBI for its own purposes. A U.S. senator meets with Michael about his casino business. He lectures Michael about how Sicilians are spreading corruption to Nevada — then demands an illegal bribe. Over and over again, the film makes the point that fallen human nature plays out the same in the new American system as it did in the old Sicilian one.

The Americans are just better at hiding it. Our elites with decades of influence and many buffers protecting them from the bloody side of their business can play the part of law-abiding, public-minded citizens. But scratch the surface a little, and they too are what St. Augustine called a “band of robbers.” He said that in reference to the founders of pagan Rome. We can apply it to old-line, powerful families in America that get rich doing business with Arab dictators, and use their money to support organizations like Planned Parenthood. Dynasties like the Kennedys, the Clintons, the Bidens, and the Bushes play the game with more refinement than the Corleones can manage.

The Godfather movies are violent, full of profanity and exploitation. Women get treated horribly, be they nameless prostitutes in Corleone brothels or “beloved” wives and mothers. The films juxtapose extreme acts of violence with beautiful Christian sacraments, such as baptism and the Eucharist. These are not films that inspire secular hope for reform. They do show in bleak and unstinting terms the price of sin, which is death.

The Last Duel and The Killers: Matt Damon’s #MeToo Epic and the Spiritual Power of Film Noir