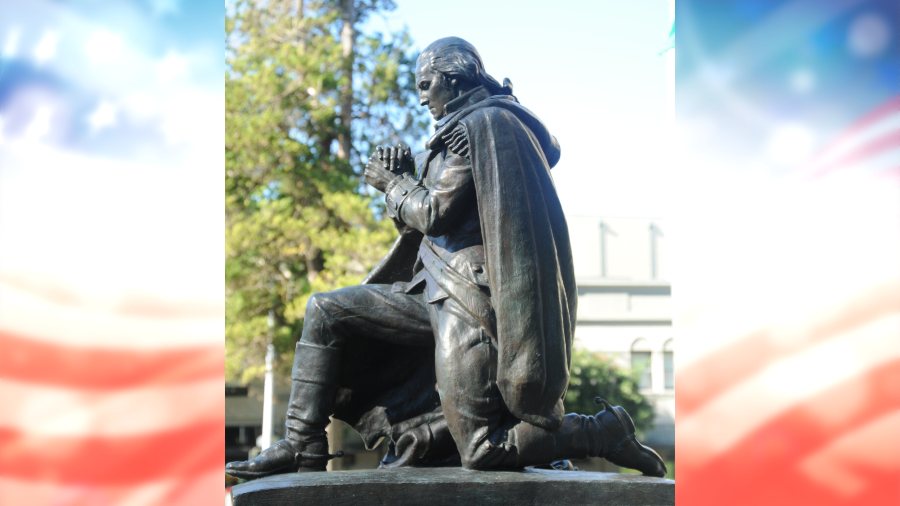 As we head into Independence Day weekend, we thought we could find inspiration from our Founding Fathers. These men unabashedly looked to God for guidance, and gave clear warning of our nation’s fate if we turned away from the Lord.

Thomas Jefferson: Our Nation’s Our Poet-Philosopher

In our guiding document, the Declaration of Independence, Thomas Jefferson — of course — wrote, “We hold these truths to be self-evident, that all men are created equal, that they are endowed by their Creator with certain inalienable Rights; that among these are Life, Liberty and the Pursuit of happiness.” (Yes, the final version says “unalienable.” Jefferson wrote “inalienable.” Isn’t it comforting to know even Thomas Jefferson had an editor?)

The Creator didn’t just bestow those rights and head off to play in Barstow. America’s leaders knew His work was personal. In his 2nd Inaugural Address in 1805, Jefferson called on God’s help to guide his service to the nation.

I shall need, too, the favor of that Being in whose hands we are, who led our fathers, as Israel of old, from their native land and planted them in a country flowing with all the necessaries and comforts of life; who has covered our infancy with His providence and our riper years with His wisdom and power, and to whose goodness I ask you to join in supplications with me that He will so enlighten the minds of your servants, guide their councils, and prosper their measures that whatsoever they do shall result in your good, and shall secure to you the peace, friendship, and approbation of all nations.

But there’s a flip side. Years earlier, in his international best-seller Notes on the State of Virginia, Jefferson had warned that God’s eyes were upon us. It’s a warning even more timely today than it was when he wrote it.

God who gave us life gave us liberty. Can the liberties of a nation be secure when we have removed a conviction that these liberties are the gift of God? Indeed I tremble for my country when I reflect that God is just, that His justice cannot sleep forever.

But What About Jefferson’s “Separation of Church and State”?

Jefferson was such a powerful writer/political philosopher that a throwaway line from one of his thousands upon thousands of personal letters is taken to carry more weight than the Constitution of the United States. Even by Supreme Court justices. Even as recently as the dissenting opinion of Justice Sonia Sotomayor in this week’s landmark ruling in favor of religious liberty. This is Jefferson talking about the need for a “separation of church and state” in a letter to the Danbury Baptists Association. Read Jefferson’s whole letter in response to the Danbury Baptists commending his stand on religious liberty, and tell me it means what the left tries to say it means.

Somehow the same guy who publicly begged for God’s help in being president, who immortalized the idea that our inalienable (unalienable!) rights are derived from God, that God would judge the nation — that this guy didn’t want God in government? Silly even on the face of it. And again, the constant drumbeat of “separation of church and state” is even more remarkable when you consider the line was only found in the 18th century equivalent of a Facebook post.

But rather than let Jefferson rebut the argument, we turn to his friend, fellow Virginian and fellow patriot Patrick Henry to clear out this muddle-headed thinking. He wrote:

It cannot be emphasized too strongly or too often that this great nation was founded, not by religionists, but by Christians; not on religions, but on the gospel of Jesus Christ. For this very reason peoples of other faiths have been afforded asylum, prosperity, and freedom of worship here.”

Though he wrote this over 200 years ago, Alexander Hamilton diagnosed the America of 2022.

“The fundamental source of all your errors, sophisms and false reasonings is a total ignorance of the natural rights of mankind.”

Were you once to become acquainted with these, you could never entertain a thought, that all men are not, by nature, entitled to a parity of privileges. You would be convinced, that natural liberty is a gift of the beneficent Creator to the whole human race, and that civil liberty is founded in that; and cannot be wrested from any people, without the most manifest violation of justice.

Civil liberty, is only natural liberty, modified and secured by the sanctions of civil society. It is not a thing, in its own nature, precarious and dependent on human will and caprice; but is conformable to the constitution of man, as well as necessary to the well-being of society.

You may say he’s a dreamer, but Founding Father and second President John Adams had a vision too:

Suppose a nation in some distant Region should take the Bible for their only law Book, and every member should regulate his conduct by the precepts there exhibited! Every member would be obliged in conscience, to temperance, frugality, and industry; to justice, kindness, and charity towards his fellow men; and to piety, love, and reverence toward Almighty God … What a Eutopia, what a Paradise would this region be.

A Closing Prayer from George Washington

First in War, First in Peace, Last to be Quoted. When the Father of Our Country, George Washington, resigned as head of the Continental Army after winning the Revolution, he offered a prayer over the nation he’d helped birth.

I now make it my earnest prayer, that God would have you, and the State over which you preside, in his holy protection; that he would incline the hearts of the citizens to cultivate a spirit of subordination and obedience to government; to entertain a brotherly affection and love for one another, for their fellow citizens of the United States at large, and particularly for their brethren who have served in the field; and finally, that he would most graciously be pleased to dispose us all to do justice, to love mercy, and to demean ourselves with that charity, humility, and pacific temper of mind which were the characteristics of the Divine Author of our blessed religion, and without an humble imitation of whose example in these things we can never hope to be a happy nation.

On this Independence Day weekend, our prayer is that America would again move in humble imitation of Christ; that it may be a happy nation.