The Fight for Independence Day 2020 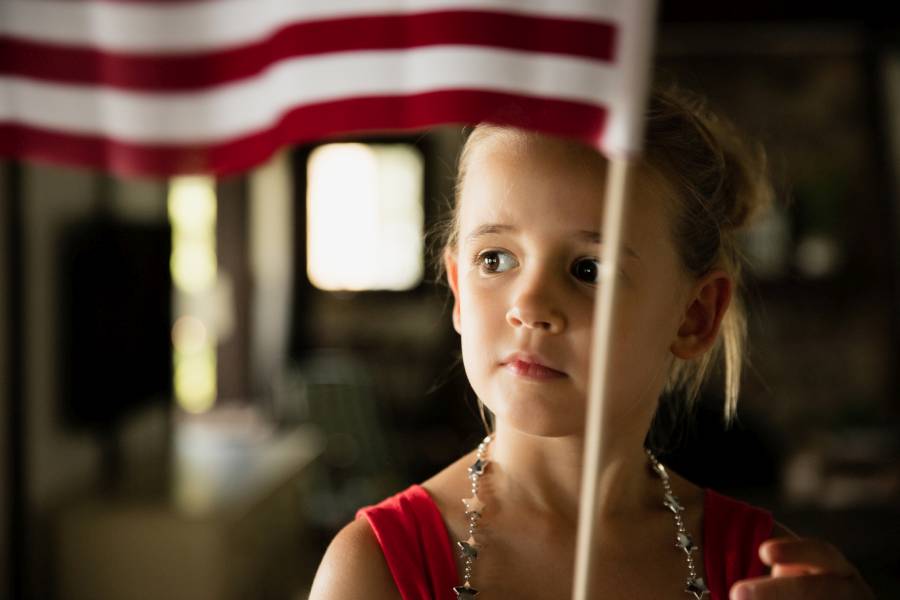 On that day, when declaring independence from England, the Founders of the United States laid down an indelible mark for liberty. They completely rewrote the relationship between government and the governed. This Declaration led directly to the emancipation and inspiration of more people of more races than any act in history. Apart from the Resurrection of Christ.

Compare the graffiti in CHAZ and the tweets of AOC to the Declaration’s text.

We hold these truths to be self-evident, that all men are created equal, that they are endowed by their Creator with certain unalienable Rights, that among these are Life, Liberty and the pursuit of Happiness. That to secure these rights, Governments are instituted among Men, deriving their just powers from the consent of the governed.

Today, the man who wrote those words is a target of the cancel culture. So are the other founders and freedom lovers who sweated and died to build a more perfect union. The Marxists marching in the streets, tearing down statues, frothing on cable news, walking the halls of Congress, want them erased. They do not want this glorious moment in human history celebrated.

The Democratic Party spent the first 140 years of its existence defending slavery, then slamming shut the door on Civil Rights. It actually tweeted that celebrating the founders (memorialized on Mount Rushmore) of the United States is celebrating white supremacy. 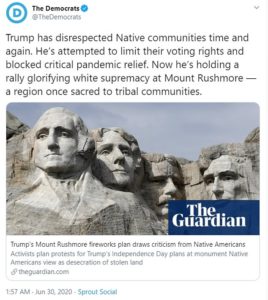 Is that what you believe, average Democrat voter? Do you want Mount Rushmore demolished? Do you also smear red paint on the statue of George Washington? Want him torn away? Erased? George Washington did what no human had ever done before in history. He turned down the opportunity to be king in favor of being a public servant, and walked away from power. TWICE. He got a newborn democratic republic with power in the hands of the people up and running. He established the remarkable and almost unique concept of “peaceful transfer of power.” He personally set an example by freeing his slaves upon his wife’s death.

Consider the historic revisionists peddling the fiction that 1619 — and the arrival of the first slaves — is the actual birth of the United States. One step below Holocaust Deniers, they build this new version of American history with silly putty. Those slaves were brought by British ships to what would become a British colony ruled by a British government that General George Washington ended up defeating! Yet he is their enemy.

Then again, why be surprised when a movement hostile to the traditional family tries eliminating our Founding Fathers from the American Family?

The Author of Liberty

With his words in the Declaration of Independence, Jefferson made the end of slavery in the United States inevitable.

For those still with ears to hear, listen. Slavery had been a fixture for thousands and thousands of years of human history. The United States got rid of it within 90. My God, that is something amazing. But inevitable once Jefferson wrote the words, “We hold these truths to be self-evident, all men are created equal.”

Yes, Jefferson had slaves. He was a product of his era. How petty to target him for that, rather than acknowledge his monumental role in creating the new era. To pull down their statues, protesters are standing on the foundation he and Washington built.

Yet it’s not Jefferson or Washington, the “slave owners,” these protesters (and CNN) hate. (For one thing, if you acting out that much hatred directed toward people who’ve been dust for generations, you’ve got serious mental issues.)

No, these philosophical and political midgets hate the huge ideas these giants brought to humankind.

The Founders Vs The Frenzied Mom

“All men are created equal.”

No, some are more equal to others. And if you don’t say it, we’ll destroy your livelihood.

As Marxists, we reject God. There is only “our truth” and the force we wield to it on you.

“Government derived from the consent of the governed.”

We know better than the people. We can stand in front of a middle-aged black man and lecture him on racism. He never studied Zinn. We certainly know more than he does about where his money should go. And if we don’t like who the governed have chosen to lead them, we will launch a violent resistance. We will use all tools of social media to rig it so it can’t happen again. We will dox and frighten anyone who might speak up.

What about unalienable rights? They don’t have use for them either.

Not if you are in the womb or in our way.

Not if you aren’t fully on board. We will go after your job, your home, your bank account, your family. (even your dog.) Your freedom to speak. Your freedom to worship. Your freedom to practice your faith. In New York we can march in the streets, burn businesses to our hearts content. You Jews can’t even take your kids to a local park.

Happiness? As white Social Justice Worriers, let us tell you happiness is a white privilege. And we insist you be as miserable as we.

Look at this clip of people taunting officers. Or this white snowflake screaming at black officers. Watch George Washington burn. And the American flag. The flag that covered the coffins of our fathers and grandfathers, and mothers, and sisters and wives of all colors. The flag that was carried into battle in the fight against slavery, against tyranny, against fascism, against imperialism, against Islamic terrorism. The flag that was carried in July 4th parades in towns small and big, from Hartford to Honolulu, Juneau to Jacksonville.

Antifa rioters on Sandy Blvd. in Portland draped a US flag over a George Washington statue & set it on fire. They then toppled the statue. “Genocidal colonist” & “f— cops” are sprayed on monument. Rioters have began to build another autonomous zone nearby. pic.twitter.com/TrZkhPK9zp

Watch these people burn that flag and desecrate that memorial. Is that who you are, Democratic voter? Because that’s who your leaders are. That’s who your candidates back and let run wild.

“I have no way of judging of the future but by the past,” said founding father Patrick Henry. By erasing its past, these vandals hope to leave America with no future.

This Independence Day will mark a choice. Between the American flag and the flag of surrender (with the hammer-and-sickle at the ready). Will you celebrate the birth of our nation? Or encourage its death? Do you look at Mount Rushmore and see Jefferson’s historic call for equality? Washington’s historic nobility and leadership? Lincoln’s heroic effort to bring forth a “new birth of freedom”? Or do you see figures deserving of the incinerator of history?

Do you see George Washington as the Father of Our Country. Or a sire of something evil?

This July 4th, are you with those who at this moment are screaming and cursing America and its founding?

Or are you with those singing “America, the Beautiful”?

Just weeks after 9/11, with the rubble of the Twin Towers still smoldering, Brother Ray Charles sat down at his piano before the 2nd game of the World Series. On this 4th of July, in the face of enemies just as determined to see our nation crumble, let us listen. And sing along. And watch closely. For in this clip, we find the beauty that is America that we can let no one steal.