And even if we do stop it, that will just slow things down. 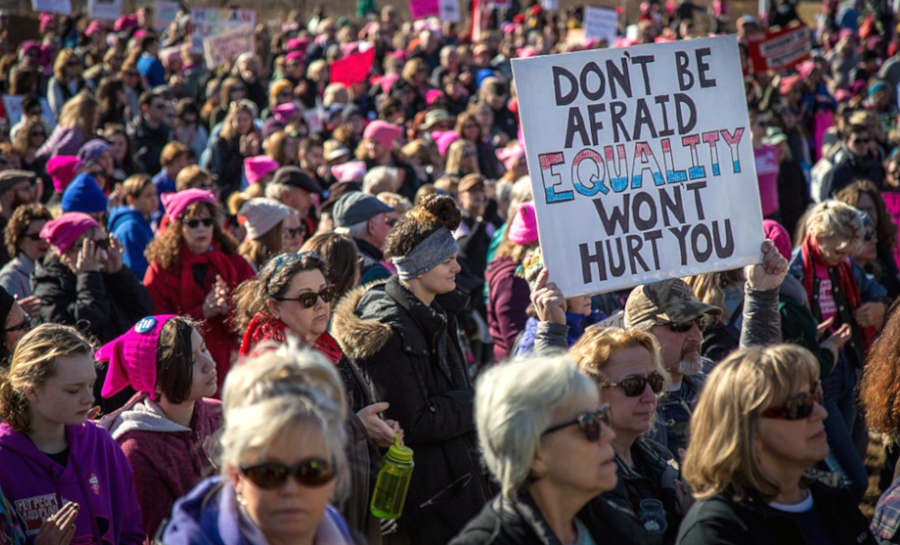 The Snake said, “God knows well that when you eat of it your eyes will be opened and you will be like gods.”

It’s been downhill ever since.

Who Tweets for Joe?

That word “equality” now covers a multitude of sins. You may have heard that Joe Biden is pushing the Equality Act. This legislation, if signed into law, will — and I say this without hyperbole — doom us all.

How magical those letters are! They arise because of the sincere belief that reality can be remade in our own image with just a word. We are equal to God and can create our own natures. We can become our sexual desire. Just say that you are “transsexual” and, abracadabra, you are! No other proof is needed, or can be required.

This is the curse of Eve.

I’ve said it many times, but what’s wrong with the transgender movement is not that some guy wants to flounce around in a dress — who cares? — but that we will be forced to say that the man is a woman. Because of “equality”. Equality will make liars out of all of us.

This passed for a joke during the gmarriage (government-defined marriage) debate a few years back: Don’t like same-sex marriage? Then don’t have one. Ha!

The canard that “equal rights doesn’t mean you get fewer rights, it just means everyone gets the same rights” is false. Those on the side of Reality and God get fewer legal rights — and more restrictions.

The joke, alas, is on us. Again, if two men want to pretend to enter into matrimony, big deal. But we are now forced, under penalty of law, to say the pair really are “married.” It is illegal to deny gmarriage if we run, or are in, any kind of business.

This is why the canard that “equal rights doesn’t mean you get fewer rights, it just means everyone gets the same rights” is false. Those on the side of Reality and God get fewer legal rights — and more restrictions.

What happened to our right to say, “That delusional man who thinks he’s a woman should not be playing sports against women, nor should he be in the showers with them”? That right is gone, or soon will be. We won’t even be allowed to call the man “he.”

Want to say that it’s nuts that three men who paid a woman to give birth to a child they each simultaneously adopted are a “throuple,” which is to say, a “family” of three dads? You cannot. That’s “discrimination.”

Who Can Count That High?

At last count there were 112 “genders,” all of which fit into Biden’s “+.” All of them, save male and female, are absurd.

Take “axigender,” which is “when a person experiences two genders that sit on opposite ends of an axis; one being agender and the other being any other gender; these genders are experienced one at a time with no overlapping and with very short transition time.”

In my opinion, this is infantile rot. And that opinion will become illegal once the Equality Act passes. At least for those own or work for a business.

Telling somebody they can’t magically make a new gender, and become it by speaking it, will be deemed “discrimination.” We’ll be told that it creates inequities, which we cannot abide.

It will be hurtful to inform the delusional of their delusion. Being hurtful, you see, is anathema to our emasculated society. What of the hurt inflicted on the based who don’t want to lie? That hurt won’t count.

Even if the Equality Act fails to pass. that will only slow down the impending doom. This is because, thanks to Neil Gorsuch, we already have approximate legal “gender equality” now.

It takes real genius to make that kind of connection. And to blind oneself to its consequences. Just think of all the desires that this logic will allow to be newly classified as “orientations” — all of which will get special protection.

Gorsuch’s folly came late in the game. Turning mere statistical disparities into “discrimination” in 1964 started our slide into doom. This is why corporations and large organizations first started to become woke. To avoid lawsuits based on statistical “discrimination” claims, they complied, even when no injustice was involved.

This is when the idea first emerged that if “not enough” of a favored group fit in some category, it could only be due to “discrimination.”

This might have seemed like a trifle in 1964, but it opened Pandora’s Box. McDonald’s, for instance, just announced mandatory quotas to usher in equality, because of the fear of “discrimination” lawsuits.

With such quotas always come a lessening of standards and quality, and, perversely, a greater desire for equality. Any remaining inequalities, that is — statistical differences — become intolerable. This system acts as a negative feedback loop, hence the cries for the Equality Act.

Such a simple, pleasing word — equality. And yet, the mischief it can do is nowhere near complete.