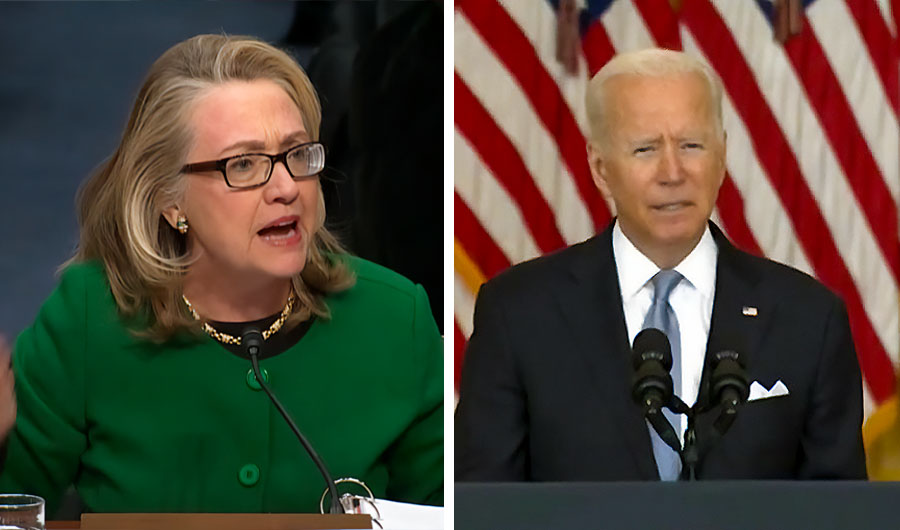 Tell me if you’ve heard this before: A White House and State Department are warned by diplomats in a foreign Muslim land that things are falling apart, militants were starting to rule the roost and Americans were in danger. In fact, weapons we’d brought there were going to be turned against us.

The warnings — despite becoming more frantic and frequent — are ignored.

Sure enough, the militants launch a swift, deadly, coordinated, planned attack. And despite plenty of assets in country, despite massive military capability that could be brought to bear within hours, despite desperate pleas for help, the White House decides those trapped are left to fend for themselves. Sorry, folks. The U.S. cavalry ain’t coming.

Several Americans and their allies are killed.

In the aftermath, the White House flat out lies to the American people. Then they try to sell the idea that it’s no big deal.

“What difference, at this point, does it make?”

From Benghazi to Kabul

Why bring it up? Because there’s a direct line from Hillary’s “What difference, at this point, does it make?” to Biden’s “That was four days ago.”

It’s not just that the Benghazi attack came in the wake of an absolutely disastrous foreign policy blunder with the Obama-Biden-Clinton overthrow of Libya’s Moammar Gaddafi. It’s not just that the timing of the both disasters coincides with the 9/11 anniversary. It’s that some of the same major players are involved in the fiasco today.

Deputy National Security Advisor Susan Rice openly and repeatedly lied to the American people, claiming the Benghazi assault was a spontaneous reaction to a video nobody saw. A claim that the U.S. already knew was false. Shortly after being exposed as a liar, Rice got promoted by Obama-Biden to National Security Advisor. Today she’s back in the White House as “Director of the U.S. Domestic Policy Council” and rumored to be one of the people actually running the country in Joe’s mental absence.

Counting the Cost of Them Not Being Held Accountable

In short, rather than be held responsible for their fatal arrogance, deception and incompetence, they were all promoted. You know the adage about people rising to their level of incompetence? These three already had proven their incompetence and rose anyway!

In Biden’s case, to the highest office in the land.

With more power came the capability to cause even greater damage. He who botches with little — without personal consequence or growing in wisdom — will botch with a lot. With unimaginable consequences, as we’re discovering by the hour.

Four Americans were needlessly ignored, abandoned and killed in Benghazi.

God knows how many Americans will be needlessly abandoned and killed in Afghanistan. That hell will go on for far more than 13 hours.

Had Biden, Sullivan, Rice and the rest paid for Benghazi, Americans and our allies would not be paying so dearly now.