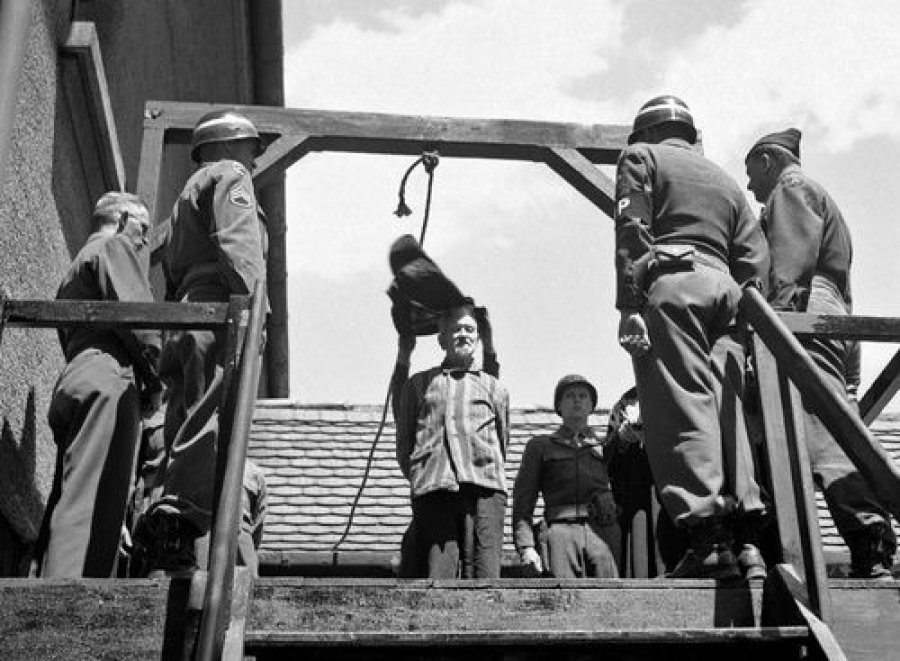 The 1946 execution of Dr. Karl Schilling, convicted at Nuremburg for conducting cruel experiments on prisoners at Dachau.

“Congress has expressly authorized the death penalty through legislation adopted by the people’s representatives in both houses of Congress and signed by the President,” Barr said in a statement. “The Justice Department upholds the rule of law — and we owe it to the victims and their families to carry forward the sentence imposed by our justice system.”

A quick way to find out someone’s views on abortion without outright asking him? Ask his opinion on capital punishment. If he’s against it in every case, he’s probably for abortion in virtually every case.

It’s funny, but your average person who’s against executing even hate crime spree killers, terrorists, and war criminals? He will also back legal abortion for any reason at all. Even for an unborn baby’s likely handicap or sex. This is no accident, nor mere side-effect of partisan politics. It’s more like dominoes falling.

There are exceptions, of course. You will find a person here and there who wants to spare the innocent, alongside the guilty. These are usually people who work for non-profits (churches, activist groups) where “humanitarianism” seems to be part of the job description. So they duly condemn all killing, regardless of who it is and whether they deserve it. They might even flirt with irresponsible pacifism.

What you won’t find, almost ever, among this kind of person? A strong, effective, consistent pro-life activist. Instead, you’ll find a Cardinal Cupich, who lists killing almost a million kids a year for our sexual convenience as one of many, many bad things. Alongside … climate change, “gun violence,” transphobic Twitter memes and childhood obesity.

This approach went on parade in an infamous op-ed Cupich published in the Chicago Tribune in 2015. Under pressure to make some statement about Planned Parenthood’s newly exposed cannibalistic sale of baby body parts, Cupich got to work. Lest Catholics under his leadership get too focused on this horror, Cupich squeezed out a cloud of ink to obscure it. He wrote the following (and I ask you to read each appalling word slowly and thoughtfully here, perhaps out loud in a whiny voice, for impact).

While commerce in the remains of defenseless children is particularly repulsive, we should be no less appalled by the indifference toward the thousands of people who die daily for lack of decent medical care; who are denied rights by a broken immigration system and by racism; who suffer in hunger, joblessness and want; who pay the price of violence in gun-saturated neighborhoods; or who are executed by the state in the name of justice.

We see in this hapless mishmash the careless throwing together of like things with unlike. Cupich literally equates (“we should be no less appalled by”) utterly incommensurate evils. Let me spell this out. Pardon me if it seems pedantic. But the Seamless Garment virus has been melting some Christians’ brains for the past 40 years. Killing kids for sexual convenience then selling their body parts in Styrofoam containers like KFC chicken thighs is not equal to any of the following.

Cupich conflates these pieces of chalk and cheese for a reason. Namely, to blunt the political impact of Planned Parenthood’s crimes on their allies, the Democrats. We saw him do so again a few years later. When a neighboring bishop banned Senator Dick Durbin from Holy Communion for backing abortion? Cupich staged a public, supportive Skype call with Durbin to thank him for helping Cupich on … immigration. Which happens (via federal contracts) to be the U.S. bishops’ cash cow, providing some 40 percent of their budget last year.

That disgraceful stunt told us all we needed to know about Cupich.

And if you are ever arguing abortion with someone, and he brings up the death penalty? That tells you a crucial truth about the person. If he even regards the issues as remotely comparable, you know: “Here is someone not concerned with justice.”

Your average person who’s against executing even hate crime spree killers, terrorists, and war criminals? He will also back legal abortion for any reason at all.

Opposing the death penalty in some cases makes sense. It’s in some localities effectively the punishment for having a bad lawyer. We should all support the Innocence Project and other efforts to clear those wrongly convicted. This is completely different from saying that it was wrong to hang the Nazi war criminals at Nuremberg. Or to execute terrorist Timothy McVeigh. Or to shoot Osama bin Laden. Someone who mashes together utterly different issues like those? He’s trying to fool you. He doesn’t understand justice, or doesn’t care about it.

There’s a certain kind of self-styled advocate of “human dignity” who actually favors nothing of the kind. Instead he views human beings, finally, as indistinguishable from rescue pets at a shelter.

Part of human dignity is paying for your crimes. We don’t imprison people or execute them first and foremost to keep society safe. That’s a happy side effect. But it’s only right to do that if we’re also enacting justice. If we are proportionately punishing an actual person for his real crimes against his neighbors and the community. Otherwise, if justice isn’t the crucial, essential element? Then we could pre-emptively imprison people who seemed likely to commit crimes later. We could also hold people in prison for life for lesser crimes, just to be on the safe side. That’s what totalitarian states, based on ideologies like socialism, do routinely. They scoff at “justice” as a “bourgeois” prejudice.

If you lack a firm sense of right and wrong, you won’t feel comfortable with the state dispensing justice. But you might still have a squishy, squeamish preference for order over chaos, pleasure over suffering. So you’ll favor actions that seem to keep you safe, diminish the suffering quotient and feed the pleasure principle. That might mean … aborting handicapped infants and euthanizing sick people.  Neither one is a “just” punishment for anything. It’s just a ruthless, unprincipled use of force to promote an outcome you treasure, or snuff out a life that you don’t.

Washing Your Hands with Pilate

Of course, if you embrace this kind of unprincipled taking of life, you might want to assuage your conscience in other ways. To wash your hands with Pilate. An easy way to do that is to oppose capital punishment. It costs you nothing. How likely are you, really, to lose a loved one to violent crime? Not very, if you live in the kind of safe neighborhood where death penalty opponents like to congregate. You know, the zip codes where all the churches have rainbow flags, and all the nice rich white folks “welcome immigrants” in to clean their homes and watch their kids, then take the bus back home to the barrio.