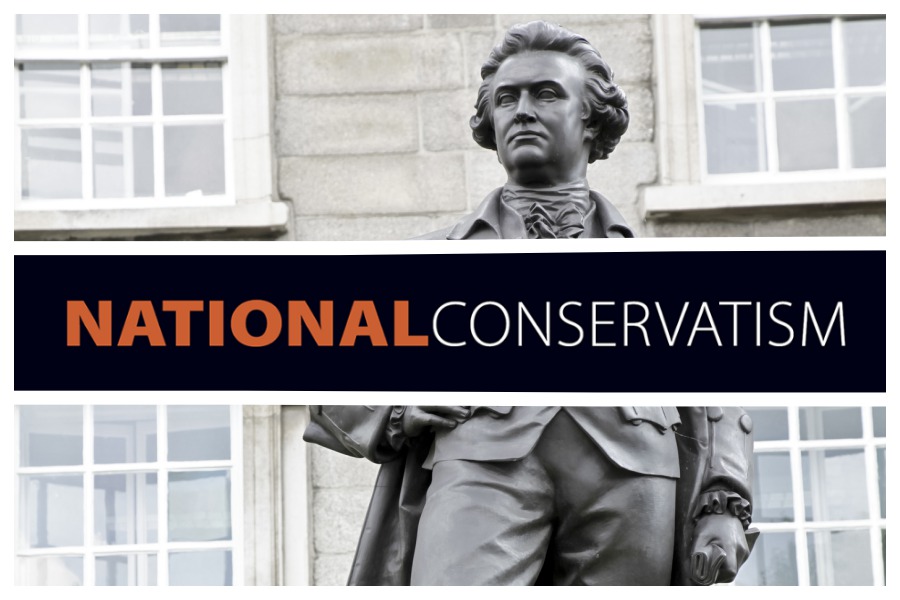 The monument to Edmund Burke at Trinity College in Dublin. The Edmund Burke Foundation sponsored the National Conservatism Conference.

Voting for Trump, he said, was like the passengers aboard Flight 93 storming the cockpit on 9/11. It was the only remaining course of action, a desperate attempt to save our country. In the “Flight 93 Election,” Michael Anton, writing under a pseudonym, said that the conservative movement of the post-Cold War era was a failure. Something different, something radical, had to be done.

It worked. The nightmare of a Hillary Administration was avoided. But what comes next?

That was the question the National Conservatism Conference attempted to answer this week. I was there. And I was blown away by it.

This, at last, was the conservative movement that I mistakenly thought I was joining when I first went Right as a young adult in the 1990s. I had grown up a pro-life liberal. But I eventually quit the Left altogether.

I could not have been more wrong.

Already in 2004, the same year I started working for FIC, Sarah Bramwell saw it. Her speech is not as well-known as the “Flight 93 Election” article. It should be. Given to the Philadelphia Society, it is the single most important piece of writing on the conservative movement in the 21st century, a foreshadowing of the Flight 93 Election.

Fifteen years ago, Bramwell warned the conservative movement against making foreign policy the litmus test of conservativism. She said that, while fighting terrorism is important, our major struggle in the long term would be against globalists.

She said the primary focus of the Right should be “preserving traditional morality, to passing on the Western inheritance, to preserving a distinctly American common culture, to resisting the threat posed by biotechnology to human nature itself.”

But, already in 2004, that wasn’t happening. Instead, she noted “the amazing disappearing act conservatives have pulled in the face of gay marriage. After so many advances, it seems, we have rolled over and played dead.”

She elaborated: “No sooner had the Lawrence decision come down from on high but conservatives, discouraged before the battle had even begun, lamented the inevitability of gay marriage, posited a new world of alternative arrangements, and even urged that family law be in some sense privatized. It seemed that the fighting spirit had all of a sudden departed from even the most reliable conservative organs.”

“One need look no further than the covers and tables of contents of the most prominent conservative journals for evidence of this,” she continued. “Of 50 articles, probably 40 of them will be on the War on Terror, and only two or three on gay marriage. This is the cultural battle of our age, and we write an article here and there on the subject. There is no precedent for this disappearing act in the history of the conservative movement.”

You know the rest of the story. The conservative movement did largely abandon social issues for economic and foreign policy issues. And our culture got so bad that, by 2016, we had to storm the cockpit.

Which brings us to this week’s National Conservatism Conference. Fifteen years later, the movement has caught up to Sarah Bramwell. In the fifteen years I have been attending conservative political conferences, I heard things at this one that I have never heard before.

I heard them say that social customs and national traditions are a better grounding than atomized individualism. That we need a serviceable consensus on American identity and character. That a positive nationalism is love of our fellow countrymen.

I heard Mary Eberstadt say that “straight up” libertarianism is like moonshine. If you’re healthy, it’s a tonic. Otherwise, it can kill you. It alone should not guide the nation. She said that the creed of “so what” has no answer to identity politics. Only social conservatism does.

She warned that sexual disorder disfigures the public square. You can’t opt out. “Nationalism, we have a problem here,” she told the audience. She spoke of employment penalties, of males in female places, of social conformity, of forced participation in collective delusion. She said the creed of “so what” has nothing to say about this traducing of reality.

I heard Yoram Hazony say that something went wrong with conservatism after the Berlin Wall. Utopian thinking swept the right and ruined everything it touched. He said the Right lost touch with reality and lost all interest in conserving anything. Only economics interested them, not religion and nation.

“We declare independence from atomic individualism,” he said. Independence from the invasion of politics by economics, reducing everything to free-choosing individuals. We must return to national tradition, to our traditional cultural inheritance, he said. It’s what made the unity in our diversity possible.

I heard Tucker Carlson say that the family is a nothing more than a speed bump to corporate America, to higher earnings and GDP.

I heard J.D. Vance say that we shouldn’t prize libertarianism over protecting kids from opioids and pornography. We must prize family and children. He noted that libertarians would say that free individuals choose not to have children. He said that is not a good enough answer. It hurts society. He said we want more babies because children are good, not just for economic reasons.

Vance made an important point about use of political power. He said just telling parents to monitor their kids’ screen time isn’t enough. Not when the whole culture is swimming in this same stuff. “Whom do we serve?” Vance asked. “The market? I serve my son.”

Fifteen years ago, Sarah Bramwell warned that saving the family and the nation was the cultural battle of our age. The conservative movement didn’t listen to her then.

But a new conservative movement is listening now. May it grow and prosper.