The Chosen Premiere: A Night on the Teal Carpet 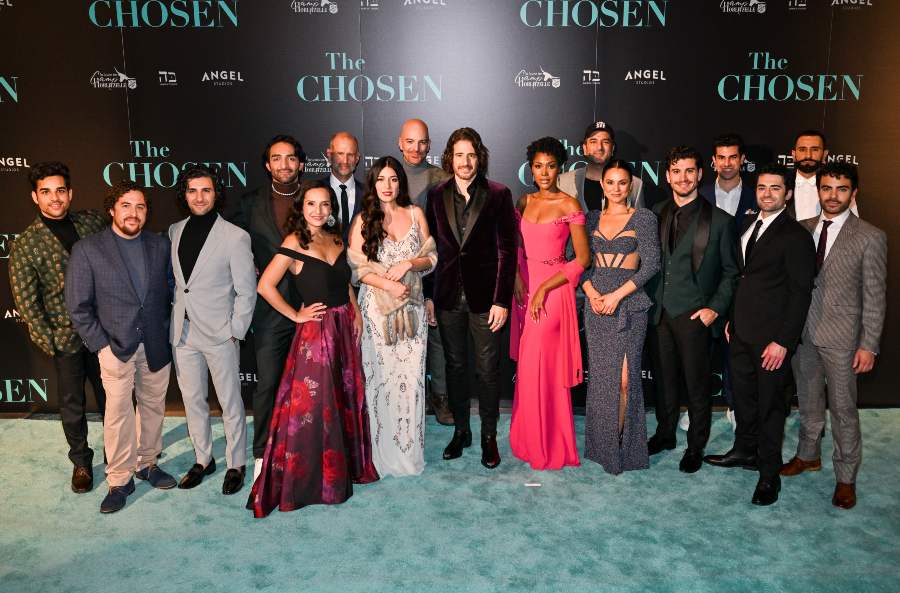 ATLANTA, GEORGIA - NOVEMBER 15: The Cast attends The Chosen Premiere at the Fox Theatre on November 15, 2022 in Atlanta, Georgia. (Photo by Derek White/Getty Images for The Chosen)

The Stream’sNancy Flory spent some time with actors, writers and producers at The Chosen’s premiere in Atlanta, Georgia, last week. Instead of a red carpet, the production, whose tagline is “Get Used to Different,” used a teal-colored carpet, a prominent color in the popular series’ intro and artwork. Throughout the evening, actors such as Jonathan Roumie, who plays Jesus, and Paras Patel, who plays Matthew, stopped to talk about their role in The Chosen and what it means to act in this series.

‘It’s Been a Huge Honor’

“Jesus is my favorite person in my life. So trying to imagine what it would be like to bring Him to life for people in the 21st century … that has been a huge honor,” said Jonathan Roumie. “My goal is to act as sort of a mirror for God. So, whatever God wants to reflect off of me to the world through this project is the best that I can hope for.”

A Challenge Worth the Reward

“Season 3 was … by far the most challenging thing to shoot that we’ve had on this show,” said Noah James, who plays Andrew. “But certainly the most rewarding. People have no idea what they’re about to encounter as the season rolls out.” He added that he sees his role as playing the character as authentically as possible. “I think that’s why people respond so well to it.”

Jordan Walker Ross (Little James) said that working on The Chosen has meant everything. “It’s the most significant acting role I’ve ever had.” It has helped him provide for his family for the first time as an actor. It also introduced him to his new best friends. “We really are a family.” He added that “There really isn’t an area of my life that it hasn’t impacted in a positive way.” Giavani Cairo (Thaddeus), on the teal carpet with Ross, echoed his sentiments. “I’ve been so blessed and privileged to be able to call these guys my brothers and sisters.” The two agreed that the friendships are lifelong. “Absolutely,” said Cairo. “One hundred percent,” echoed Ross.

A Rare and Beautiful Thing

“I’m sort of downloading the energy that everyone’s bringing tonight,” said Brandon Potter, the actor who plays Quintus. “Just walking into the building there was so much joy — and that’s a rare and beautiful thing. So, right now, tonight’s about appreciating that joy and that energy.” Potter also said that he was looking forward to seeing the show onscreen. “Every frame is just gorgeous and I think the big screen will do it justice.”

The Humanity of the Romans

Kirk B.R. Woller (Gaius) wants viewers to see the humanity of the Roman soldiers. “Not to vilify anyone … from the very beginning that was important to me. … It’s easy to dismiss someone, but you can see his humanity on the other side. The stronger the villain, the stronger the hero.” Woller said that he was honored and blessed to be part of the show. “And to see [creator Dallas Jenkins’] success, to me, has been the greatest part of this.”

The Chosen had a stellar opening last weekend at the box office. The first two episodes of Season 3 finished domestically at #3 with $8,687,682.00.

The Chosen’s VP of Original Content on Season 3: It’s ‘Getting Real’ on What it Means to Follow Jesus

The Chosen’s Giavani Cairo on Season 3: ‘The Honeymoon’s Over’

The Chosen’s Elizabeth Tabish: God Has Not Forgotten You

The Chosen’s Brandon Potter: ‘Season 3’s Going to Get Dark’