The Brew: Wanted for Threatening to Punch Out the President 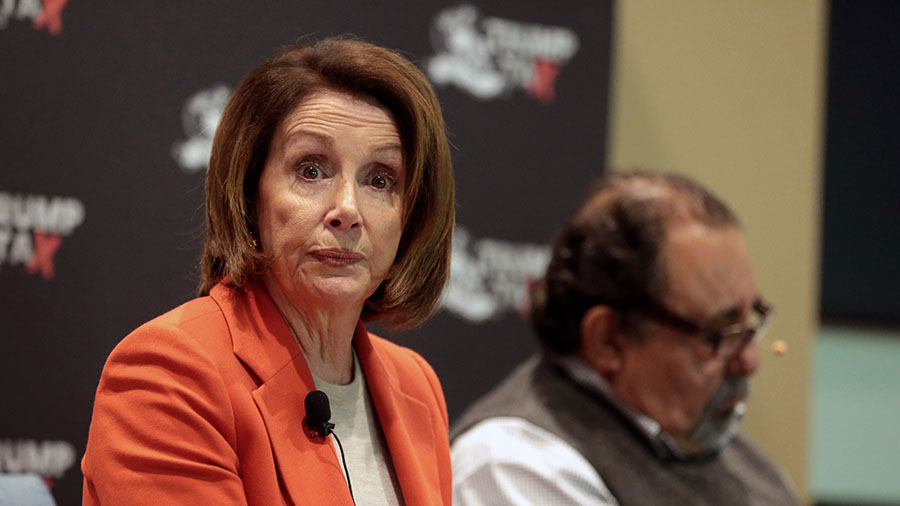 Welcome to Monday and another week where we don’t know whether the news is being written by Edgar Allan Poe, Lewis Carroll or the good folks from the Babylon Bee.

Video Proof Emerges of National Leader Calling for Violence on January 6. Turns Out Its Nancy Pelosi.

Want proof of a national leader calling for violence on January 6? You’ve got it. And it turns out to be the woman responsible for securing the U.S. Capitol. Yes, Nancy Pelosi.

“I’ve been waiting for this”? For what? A chance to clock the President?! Always curious why Trump called her “Crazy Nancy”? Be curious no more.

Crazy For Thinking It Was a Set-Up?

CNN aired Alexandra’s footage Thursday night. But in their article about it, CNN deliberately misquoted Pelosi to soften her threat against Trump. Newsbusters made the great catch.

CNN also omitted a sentence in the middle of its transcript – in which Pelosi says that she relishes the thought of Trump’s appearance, because her time to shine had come: “This is my moment.”

You keep being told you’re crazy if you think January 6 was a set-up. Then you find out Pelosi had a documentary crew following her around on a day she wasn’t supposed to have all that much to do. And she was “waiting for this.” And this was her “moment.” Strange, as Todd Barnes noted. Just strange.

All from the woman in charge of security at the Capitol, who rejected Trump’s strong recommendation to have National Guard on hand. Who refuses to release all the J6 footage from the Capitol. Who orchestrated phony, due process-shattering “hearings.” Whose security killed the one person actually killed in the Capitol on J6. Who actually benefited from the riot … not only by stopping the day’s planned exposure of the rampant election regularities in the challenged swing states, but by opening the door for the nationwide demonization and punishment of her party’s political opponents.

It wasn’t Trump who Pelosi punched that day. It was Lady Liberty.

Lots of heavy action these past few days in the race to determine whether Joe Biden gets impeached or gets forced out by the 25th Amendment.

In the middle of last week it was looking good for impeachment as the Saudi’s confirmed the White House begged the oil giant to hold off on cutting production until after the mid-terms. When the Saudi’s rebuffed the offer, Biden threatened “consequences.” As Mollie Hemingway noted, by the standards set by Trump’s first impeachment, this was clearly an impeachable quid pro quo.

Then on Friday, the 25th Amendment got another big boost when Biden creeped out yet another young woman. Biden was doing a meet-and-greet at California’s Irvine Valley Community College when grabbed onto a young woman from behind, and uttered over her shoulder, “No serious guys ‘til you’re 30.” The girl looked surprised and unsettled and turned away, but Biden kept at it.

The incident was captured by TPUSA’s Kalen D’Almeida.

President Joe Biden grabs a young girl by the shoulder and tells her “no serious guys till your 30” as she looks back appearing uncomfortable, secret service appears to try to stop me from filming it after Biden spoke @ Irvine Valley Community College | @TPUSA @FrontlinesShow pic.twitter.com/BemRybWdBI

(And yeah, why does it appear the Secret Service doesn’t want Kalen to be filming?)

Then on Saturday, Biden risks dripping ice cream on a woman at an Oregon Baskin-Robbins while leaning in to … perhaps make a comment. But it sure looks like a quick sniff of the hair.

Biden attempts a sniffing at a Baskin Robbins in Oregon today pic.twitter.com/HeTcGxPLXj

Buttigieg: Dems Having Trouble in the Polls Because Things Are Going So Well

Perhaps Transportation Secretary Pete Buttigieg spent too much time during his family leave watching soap operas because he’s certainly come up with some ridiculous dialogue.

Buttigieg explained to This Week With George Stephanopoulos why Democrats are having such a rough time campaigning for the mid-terms: Because the Democrats have had so much astounding success.

I do think we run the risk — because there have been so many accomplishments — right, the CHIPS Act which is bringing manufacturing back to the United States, the PACT Act, getting veterans the benefits they deserve, of course the infrastructure bill, the Inflation Reduction Act, on top of that American Rescue plan … in some ways having achieved so much legislatively makes it hard to talk about it all at once because there are just so many accomplishments.

Good News: Virginia Politician Who Wanted to Charge Parents With “Child Abuse” If They Didn’t Affirm Their Kid’s Gender Wishes Backs Down

Sickness. Virginia Democratic State Rep. Elizabeth Guzman drafted a bill that would expand the definition of “child abuse” to include parents who want no part of the transgender madness. Guzman acted in response to Gov. Glenn Younkin ensuring parents be made aware if their child wanted to “transition” or use a different name.

“Utterly horrifying,” tweeted Texas Sen. Ted Cruz of Guzman’s planned bill. “These zealots think they are your children’s parents, and they’ll put you in jail if you disagree.”

Fortunately, after the outcry Guzman has backed off. She will not introduce the bill after all.

Trick or treat? Halloween is two weeks from today. Not much time to open a savings account to save up to pay for this year’s trick-or-treat candy. Or, for that matter, your church’s faith-based harvest celebration. Yep. Candy prices soared 13% in September, the biggest jump ever recorded.

In fact, thanks to inflation, a 100 Grand bar is now worth only about $87,000. Layoffs leave you with only Two Musketeers. And Almonds have much less Joy. The elites just “Snicker.”

Of course, candy prices … or for that matter, cavities … are not the big concern with Halloween. See Billy Hallowell’s “Why are Witchcraft, Ouija Boards, Tarot, Horoscopes and the Occult Raging?”

The demonic hardly limits itself to October 31. (Perhaps that’s one of the enemy’s greatest tricks. Convincing people to focus only on Halloween, when the demonic spins and plots and corrupts the other 364 days as well.)

Another Church Vandalized by Pro-Abortion Thugs

Church of the Resurrection in Lansing, Michigan was defaced by three pro-abortion thugs last weekend. The criminals left slogans such as “abort the court” and “death to Christian nationalism.”

Since May’s leak of Roe being overturned, an endless wave of violence has hit churches and pro-life centers. And even though the terror group Jane’s Revenge has claimed responsibility for at least 18 attacks, not a single arrest.

Well, that’s not true. The FBI has stormed and rounded up a number of pro-life activists.

You don’t need an Ouija Board to encounter demons. Just a news feed.

An eye-opener from Stream contributor Jason Jones. “Electric Cars Aren’t ‘Green.’ They’re Black as the Coal They Run on, and Brown as the African Kids Who Mine Toxic Chemicals for Their Batteries.”

And coming up this morning, a very special treat: Sidney Powell comes to The Stream with “Is Andrew Weissmann Influencing DOJ on a Crusade to Destroy Donald Trump?”