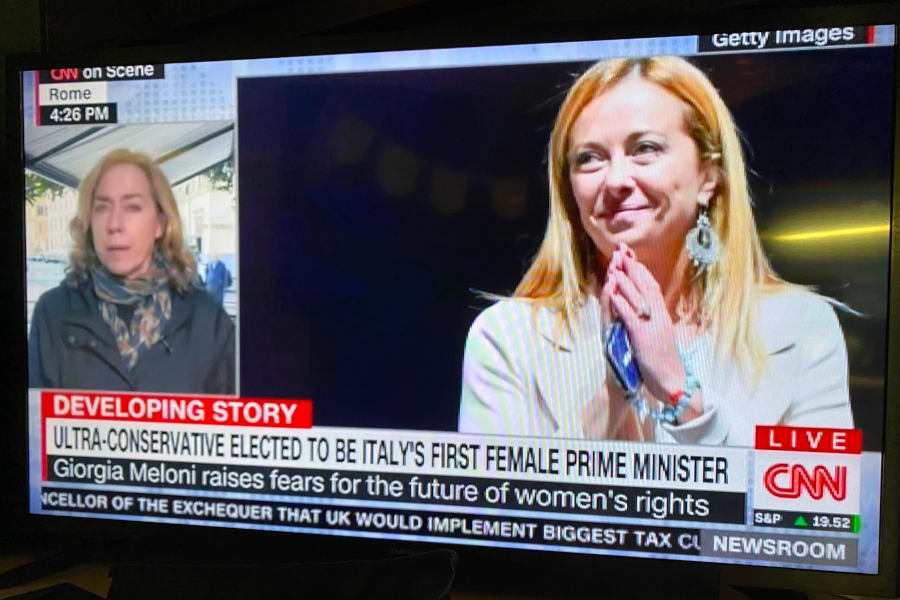 I know it’s early, but grab the popcorn. I’ll tell you why at the end.

Grotesque Display or the Greatest Troll Ever?

For the past week or so, social media and news sites have been splashing the story of “Kayla Lemieux,” the Canadian shop teacher who’s been coming to class wearing enormous prosthetic breasts with protruding nipples that could cost a kid an eye. Kayla, we’re told, began transitioning last year. And though the fake breasts are vulgar, with some girls feeling mocked, and parents and students protesting, Lemieux’s school Oakville Trafalgar High School is backing the teacher. Because, well, it’s woke 2022, and if a shop teacher wants to sport fake breasts the size of Buicks, so be it. The local school board is on board too, although it will consider imposing a new dress code that would force Lemieux to sport smaller falsies.

But now there’s a potential twist to the already twisted story. According to an anonymous posting, Lemieux is pulling a fast one.

Just last year, the post claims, Lemieux was nearly fired for “toxic masculinity.” That he was known for mocking woke culture.

“No better way to troll clown world than to become an over-the-top caricature of a woman.”

True, an anonymous post citing hearsay is not exactly reliable — though the mainstream media pushes stories as fact on much less — but if true, what a mirror on society it’ll be. Almost fired for being a macho shop teacher, coddled for suddenly identifying as a woman and dressing as a grotesque caricature of a female.

A Blow to the Great Reset Crowd. Italy’s Getting Its First Female Prime Minister, Speaks of God, Family and Country.

Giorgia Meloni becomes Italy’s first female prime minister after national elections Sunday. Meloni is unabashedly pro-God and family and is no fan of seeing her country overrun with illegal migrants. Naturally, she’s dubbed “ultra-right” by the American media and is compared to Mussolini. She’s a “fascist” … but then again, according to Biden and his handlers … anyone who doesn’t support him is a fascist.

It gets better. The Stream’s Gayle McQueary caught this insane graphic on CNN:

Yep. In the same breath they note Meloni is Italy’s first female prime minister they offer dire warnings of what her election means to women’s rights. Huh? Watch that stretch, CNN. You’re likely to pull something.

If you want to get a taste of why the left attacks her, check out these clips, where she calls out the left for targeting everything that gives an individual his unique identity.

The new Prime Minister of Italy.

Want to get some idea of what Meloni is fighting against? Listen to Spain’s Minister of Equality, Irene Montero. Montero is pushing the notion of adults having sex with children … as long as the children consent.

Spain’s Minister of Equality Irene Montero: “Childrenx” have the right to consent to sexual relations with adults pic.twitter.com/eZ5BauvD3Q

Who knew? Former White House Press Secretary Jen Psaki is capable of speaking the truth after all. She admitted on NBC’s Meet the Press Sunday, “If [the election] is a referendum on the president, they will lose, and they know that. They also know that crime is a huge vulnerability for Democrats — I would say one of the biggest vulnerabilities.”

So that’s why Democrats are running around calling Republicans “extremists.” Psaki says if the election is about who is more extreme, the Democrats could win. In other words, distraction is their only option.

With Psaki’s comments in mind, her successor Karine Jean-Pierre was asked Monday if Joe Biden thought America’s cities were safe. Her response? “It is not a yes or no question.”

Meanwhile, new polling shows Biden back under 40% approval. Yet, according to CNN, Democratic leaders and operatives are “warming” to the idea of Biden running for re-election.

How bad are Kamala, Mayor Pete and Gov. Newsom that the Democratic machine is thinking, “We’re better off sticking with the mentally-challenged guy who has run the country into the ground, polls worse than rabies and is pushed around by the Easter Bunny.”

CIA Launches Its Own Podcast

The CIA is launching its own official podcast. According to the agency, The Langley Files will separate truth from fiction. To “demystify” the CIA “when trust in institutions is in such short supply.” You mean like how a bunch of CIA honchos lied about Hunter’s laptop being Russian information? Or then-CIA Director John Brennan lying to Congress about the agency’s spying on the U.S. Senate?

I just hope they have the sense of humor to bleep out large portions of their first couple podcasts.

Jeffrey Dahmer was gay. A great majority of his victims were gay. Dahmer corralled his victims through sex-related activity. Ergo, by definition, a movie about Jeffrey Dahmer will be dealing with homosexual activity. Ergo, the film involves LGBTQ content and should be tagged as such. No brainer, right? If Dahmer was a smoker seducing people in cigar lounges you’d see the tag about scenes depicting smoking.

However, LGBT+ activists and internet Karens pressured Netflix to drop the LGBTQ tag from its upcoming biopic, saying how unfair it is to associate Dahmer with LGBTQ. And poof, the tag is gone.

What next? Hannibal Lecter turning vegan? Producers of the James Bond films announced plans to wreck the 007 franchise just in time for the 60th anniversary of the Bond films. In future Bond films, 007 will continue “evolving” into a more sensitive guy. Daniel Craig is credited with giving movie-goers a peek into the secret agent’s “inner life” and “cracking Bond open emotionally.” That process will continue. Producer Barbra Broccoli says, “Bond is evolving just as men are evolving. I don’t know who’s evolving at a faster pace.” Soon he’ll be sporting a man bun, driving a Prius and weeping at Adele songs.

I’m looking so forward to The Spy Who Related to Me on a Deep and Personal Level, Dr. No Thank You and The Non-Binary With the Golden Gun.

Last week, Stream publisher James Robison sat down with both Eric Metaxas and The Stream’s John Zmirak. The topic was Eric’s new book Letter to the American Church. A fascinating ride you don’t want to miss.

The Brew: Getting Inside Lady Liberty’s Head