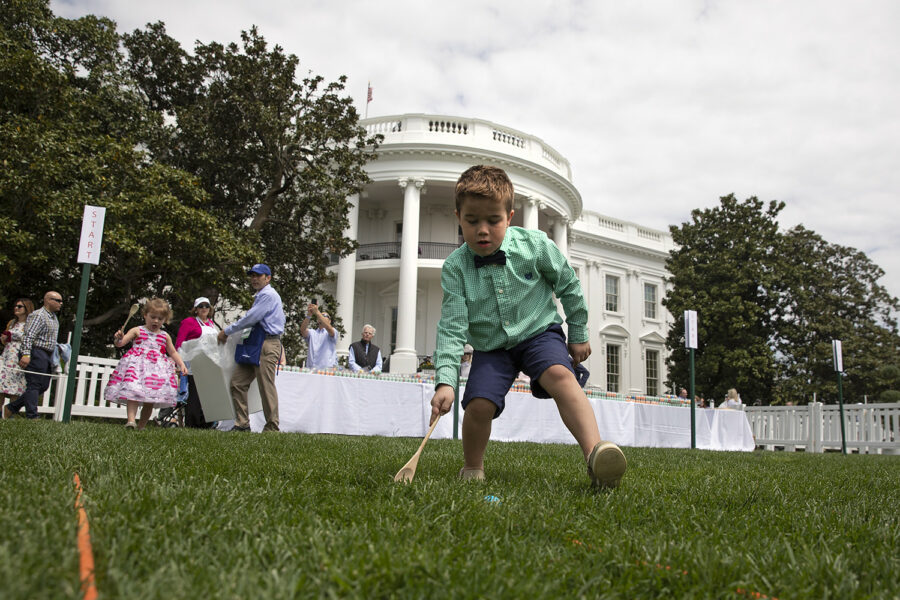 I hope you had a joyous Easter. And the festivities aren’t finished yet.

After a two-year break due to COVID, the annual White House Easter Egg Roll returns today. Some 30,000 kids and adult chaperones are expected to take part in the traditional event, which dates back to 1878.

No word on whether Joe Biden plans on bringing his invisible friends.

Don’t know what I’m talking about? Last Friday, Biden finished a speech and turned to shake the hand of people who weren’t there.

After Biden finished his speech, he turned around and tried to shake hands with thin air and then wandered around looking confused pic.twitter.com/ZN00TLdUUo

Then again, perhaps critics are being too harsh. Perhaps he was greeting some of his 81 million voters. Phantom voters have the right to shake the hand of their president too!

Biden Won’t Be Going to Ukraine

In the wake of British Prime Minister Boris Johnson’s surprise visit to Ukraine, the question was raised whether Joe Biden would also go in support of the war-ravaged country. Biden had said he was “ready to go.” Ukraine President Zelensky said Sunday he “should come.” But White House press secretary Jen Psaki poo-pooed the idea.

“He’s ready for anything – the man likes fast cars and aviators,” Psaki told the Pod Save America podcast Thursday. “He’s ready to go to Ukraine. We are not sending the president to Ukraine.”

Then she added something that gave away more than she intended. “We should all maybe be relieved about that.”

Because of the risk of harm, Jen? Or the definite risk of embarrassment?

Shoot a President, Get a Concert Gig

You’ll never guess who is set to play a sold-out show in Brooklyn this summer. John Hinkley. Yes, that John Hinkley. The John Hinckley who shot and nearly killed President Reagan, and wounded several others.

After his high-priced family lawyers convinced a jury he was insane, rather than a cold-blooded assassin, Hinckley spent decades in a psychiatric hospital. This summer all remaining restrictions on him will be lifted. And on July 8, he’ll be performing at the Market Hotel. Really.

Seems Hinckley’s become a singer-songwriter with 26,000 followers on YouTube, and even his own record label. As creepy as that sounds … and as creepy as he sounds.

The Market Hotel is defending the decision to host the would-be presidential assassin.

Question: Do you think the hotel would be booking Hinckley had he plugged a Democrat?

Ed Buck won’t be doing any concerts. He’s been sentenced to 30 years in prison. Don’t know the name? You would if he were a huge Republican bundler and pal of, say, Jim Jordan. Instead, Buck is an L.A. Democratic powerbroker and buddy of Rep. Adam Schiff. He’s guilty of killing two black gay escorts. (That we know of.)

The tragedy is the West Hollywood gay community had long warned authorities Buck was preying on gay black men … but nothing was done about it. Buck was too powerful, too connected.

For nearly a decade, the wealthy, white Buck lured young Black men at the lowest points in their lives — homeless, addicted, resorting to subsistence-level sex work — into what he called “party and play” sessions.

Buck plied the men with drugs and then sexually assaulted them while they were unconscious or immobile. In two cases, he injected his victims with fatal amounts of methamphetamine.

Thankfully, Buck will now be spending the rest of his life behind bars. Unfortunately, because campaign dollars mean more than black lives to the powerful Democrats of Los Angeles, two people had to die before justice was done.

Desperate to stop Elon Musk and his effort buy Twitter and return free speech to the social media giant, Twitter resorted to a “poison pill” Friday. As CNBC explains:

Under the new structure, if any person or group acquires beneficial ownership of at least 15% of Twitter’s outstanding common stock without the board’s approval, other shareholders will be allowed to purchase additional shares at a discount.

Twitter again proved why Elon Musk’s bid is so threatening. They again suspended the account of Libs of Tik Tok. All Libs of Tik Tok does is repost videos liberals post of themselves. Somehow presenting liberals in their own words and images is “hate speech.”

Seems like a big deal. In a court filing Friday, John Durham revealed that “at least five” Clinton associates have refused to cooperate with his investigation, citing their First Amendment right against self-incrimination.

Here’s another doozy from the filing:

Agency-2 [The CIA] concluded in early 2017 that the Russian Bank-1 data and Russian Phone Provider-1 data was not “technically plausible,” did not “withstand technical scrutiny,” “contained gaps,” “conflicted with [itself],” and was “user created and not machine/tool generated.”

This refers to the allegation Trump was connected to the Putin-controlled Alfa Bank. It’s saying that the information Clinton’s operatives was giving the FBI and anyone who would listen, was manufactured. They faked the data.

There’s another point. Note the date. “Early 2017.” The CIA knew from the start of Trump’s term that the Alfa Bank story was manufactured by Hillary Clinton. Yet, the FBI’s “Trump Russia Collusion” investigation continued. And the Mueller Special Counsel Investigation didn’t see fit to mention it. And Obama’s CIA director John Brennan and Director of National Intelligence James Clapper ran around for four years accusing Trump of being a Russian stooge.

All of them knew Trump was innocent. All of them betrayed the American people.

Our Tom Gilson launches a two-parter today called “Marriage is Good — Let’s Keep It That Way.”

And coming up, Nancy Flory talks to Dean Cain about his new faith-based film No Vacancy.