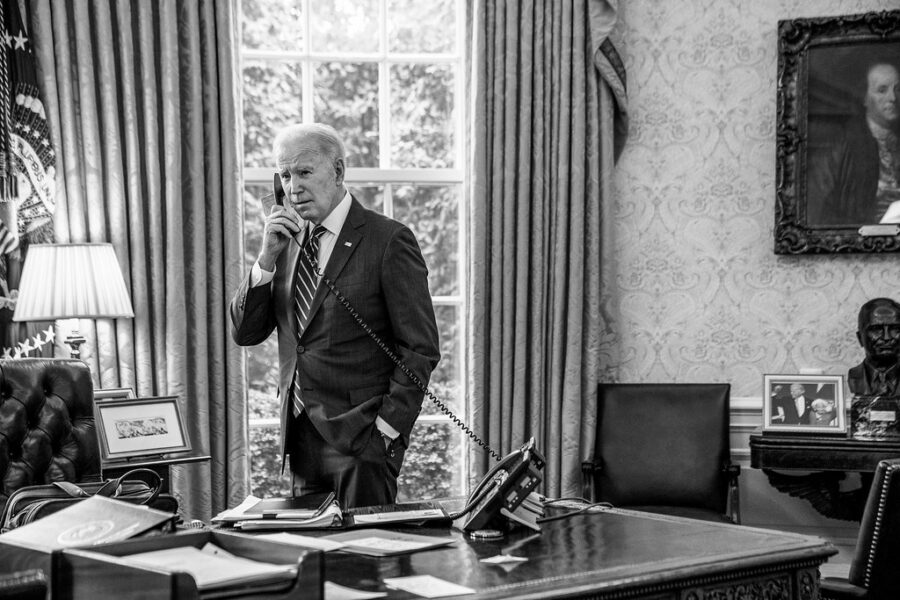 To those who have served, we cannot possibly thank you enough. You are our treasure. You sailed the seas, took the cliffs, soared the skies, marched the swamps and deserts. You answered the call, took on the tough assignments, and far too often gave the full measure of your devotion.

You gave us what we have today. We throw ourselves on our knees and pray we do not now squander it.

Stream writer and best-selling military author Tom Sileo offers up for Veterans Day an excerpt from his brand new book, Be Bold. It tells the true story of how U.S. Marine Corps Major Megan McClung broke barriers for women at war. Thank you, Tom, for bringing stories like Megan’s to the American people. And God bless the McClung family. Read the excerpt here.

On Tuesday, a leftist friend on Facebook bemoaned the pending “fascism” that would result from an election favoring the GOP.

He was right. Less than 24 hours after polls closed, Joe Biden delivered. We’ll get to that in a second.

Joe Biden Speaks … But Only to Who He’s Allowed To

On Wednesday, Biden rose from the basement for his first press conference since January. Biden pressers are like the solstice. They only happen twice a year.

He faced a room full of 100 reporters. But, he quickly declared, he was only going to call on a specific ten from a list prepared by his handlers.

‘I have a list’: Biden says he’s supposed to call on 10 specific reporters at his first press conference since January pic.twitter.com/Bok4ElDWq9

“I have a list” he says. No ice cream if he strays.

The man with the power to put his finger on the nuclear button cannot point his finger at the reporters of his own choosing.

Why not? Maybe it’s because if was allowed to take hard questions, he’d make mental errors like confusing the Ukrainian city of Kherson with the the Iraqi city of Fallujah. Oh wait. He did that, despite the handpicked questions and friendly reporters.

Russia may have pulled out of Kherson. Biden and Obama pulled the U.S. out of Fallujah and Iraq, midwifing the birth of ISIS.

Biden was asked what he would do differently in the wake of the midterms, knowing that 75% of the voters told pollsters the country is heading in the wrong direction.

REPORTER: "What in the next two years do you intend to do differently to change people's opinion of the direction of the country?"

Even CNN said of Biden’s response, “That’s insulting people, and I don’t think that was a good answer.”

Notice how Biden says people lack the information about what he is doing. Well, half the time we can’t understand what he is saying. But more to the point, he’s got the bully pulpit, a mainstream media eager to pitch his version of events and policies and a hotline to Big Tech to smother any information he doesn’t like. The problem isn’t that Americans don’t get his “information,” but that it’s all disproven by what we encounter in life.

Biden was fed a question about Elon Musk. I mean, of all the things to be asking Biden about the day after the most consequential mid-term in our lifetime, you’re gonna ask about the Tesla guy who just bought Twitter? He was asked if Musk is a national security threat. The canned response:

“I think that Elon Musk’s cooperation and/or technical relationships with other countries is worthy of being looked at whether or not he is doing anything inappropriate.”

Yeah, I’m going to put a target on the back of a guy who just took over a Big Tech giant promising to bring back free speech. And just happens to now have in his hands all the exchanges between my people and Twitter in regards to their censoring stories that hurt me. Sounds like a threat to me. “Nice company you just bought, Elon. A real shame if anything were to happen to it … .”

Then there’s Biden’s hypocrisy when it comes to “relationships” with other countries.

As Rep. James Comer pointed out on Fox News Thursday morning. “To say that [Musk] should be under investigation, but then that Congress should turn a blind eye to his family’s influence peddling with China, with Russia, with Ukraine, and yes, with the Middle East, is amazing.”

Oh, for one reporter at the White House to ask directly, “Are you the Big Guy? If not, who is?”

Biden was asked about the potential of the GOP investigating Hunter Biden and Biden when/if they take over the House.

The same thing the Armenian wished Liam Neeson in Taken. Boy was he in for a shock.

Nobody’s laughing, Joe. Not when the documents show you sold access to the Vice Presidency like tickets to a fall carnival. Including access for our most dangerous enemy. Pocketing millions in the process.

Also nobody’s laughing at the implications of Hunter’s inappropriate conduct with your own granddaughter, to say nothing of the hookers you helped pay for. The fact you find the GOP push on the laptop “almost comedy,” given what’s on that laptop, is sick, sick, sick.

Most ominously, when asked about Trump and 2024, Biden said, “We have to demonstrate that [Trump] will not take power if he does run. Making sure he, under the legitimate efforts of the Constitution, doesn’t become the next president again.”

Biden: "We have to demonstrate that [Trump] will not take power if he does run. Making sure he under the legitimate efforts of the Constitution, become the next president again." pic.twitter.com/iwE3hP2njG

He didn’t say, “We’ll beat him again.” Which is what you say if you won a free and fair election and your opponent is gearing up to run against you. He said he will use the full power of the United States government to prevent Trump from taking office. To prevent the American people from deciding for themselves if they want him back as president. In any other country, this strong-arming would be called just what it is. Fascism. A two-bit dictatorship.

How in the world is using his office to stop his political opponent NOT impeachable? Trump makes a call and casually asks in passing what the Bidens were up to in Ukraine and he gets impeached for abuse of power. Trump says: “Please look at the shenanigans in the swing states” and they impeach him and accuse him of insurrection.

And “insurrection” is precisely what Biden is talking about with the seemingly nonsensical phrase “legitimate efforts of the Constitution.” He is saying out loud that his Department of Justice is planning to charge Trump with insurrection to use the 14th Amendment to disqualify Trump from office. (Or he is babbling further nonsense, which should immediately disqualify Biden from office. But that’s for another day.)

Keep in mind that the J6 hearings, for all their bias and bluster, presented no evidence that Trump actually committed any insurrectionist act. The incessant use of the word “insurrection” was for the very purpose that Biden blurted out yesterday. To stop Trump at all costs and abuse the 14th Amendment to do it.

If the GOP does take the House, it must immediately move to impeach Joe Biden. His FBI has already raided Trump’s home. His DOJ has already gobbled up whatever “evidence” was amassed by the bogus J6 committee. Yesterday, he made clear why.

Americans will not be free to choose their own president.

Forget Trump. If this stands, the nation falls.

Yesterday’s vets from Yorktown to Normandy to Kabul are watching.