The Brew: Hillary’s Nay, Leaking DOJ … and a ‘Cosmic Tarantula’ 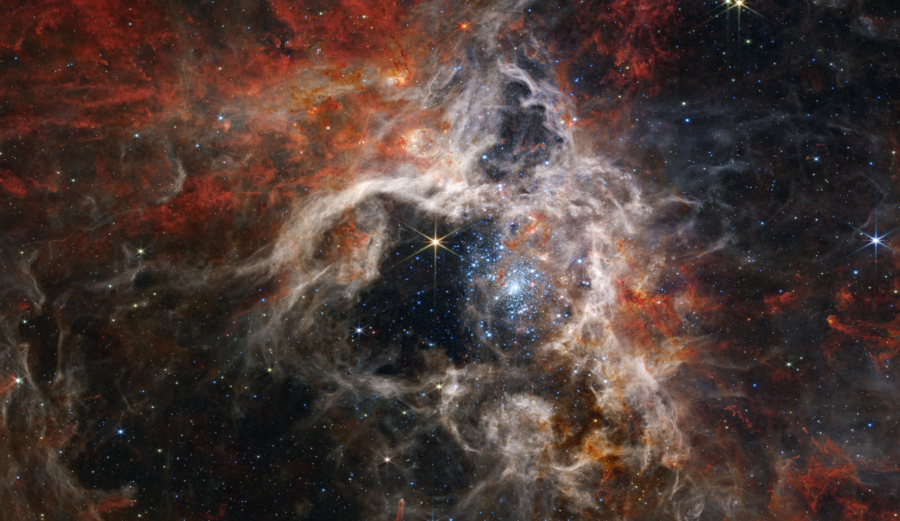 "A Cosmic Tarantula." In this mosaic image stretching 340 light-years across, Webb’s Near-Infrared Camera (NIRCam) displays the Tarantula Nebula star-forming region in a new light, including tens of thousands of never-before-seen young stars that were previously shrouded in cosmic dust.

We have a big Brew … and a Cosmic Tarantula! Yes, our feature image, taken by NASA’s James Webb Telescope. Wow.

The DOJ leaked to the Washington Post that among the documents seized in the Mar-a-Lago raid was one containing information on the nuclear capabilities of an unnamed country.

But the media, of course, are going bonkers.

Where were these clowns in 2015 when Barack Obama released Israeli nuclear secrets? Not tucked away at one of his pricey cribs guarded by Secret Service. He declassified (and let loose) a 1987 report on Israel’s top secret nuclear program.

Until Obama’s move, Israel had never confirmed that it had nukes. As reported by Israel National News, this came at a time of growing tensions between Obama and then-Prime Minister Benjamin Netanyahu. Netanyahu was fighting tooth and nail to stop Iran’s nuclear program. Obama was working overtime to solidify a deal that would end up with Iran having nukes. And hence the ability to carry out its desire to wipe Israel off the map.

Actually, we do know where these clowns were in 2015. Obama’s point man for selling the Iran nuke deal was Ben Rhodes. He boasted during the Obama Administration how the news media would take anything he gave them because they weren’t smart enough or experienced enough to know any better, and the Washington echo chamber would do the rest. They haven’t learned a darn thing.

Mind If We Play a Little Speculation?

So what’s with the talk of documents discussing nuclear capabilities? Think about it. You’re Donald Trump. Obama tried to destroy you and undermine democracy. You’ve spent years talking about how the Iran nuke deal was horrible. If your ultimate goal is taking down the Obama-Biden-Clinton-Deep State regime, what are some of the documents would you want to keep close? Documents pertaining to Obama’s Iran nuke deal and the secret side deals Obama made with Iran to secure the deal. For example, how exactly did hundreds of millions in foreign currency get flown to Iran on pallets? What else did Obama promise Iran without Congress, let alone the American people, knowing?

Just a hunch, but don’t be surprised if the nuclear-connected docs have to do with Iran … and expose Obama.

Update: Paul Sperry of Real Clear Investigations actually reported this may be the case back in August. On August 31st, Trump “re-Truthed” it.

Hillary Clinton has ruled out running for president in 2024.

“However,” Hillary told CBS anchor Norah O’Donnell, “If Joe decides to give up the grouchy old despot gig, count me in!” (Okay, maybe she was only thinking it.)

Hillary also urged Republicans to “grow a backbone” and stop Trump from running.

This from a woman who couldn’t even stop her husband from jumping interns in the White House.

Meanwhile, Hillary is getting roasted for declaring that she was cleared of any wrongdoing in her email scandal and that she didn’t have any classified emails.

She was not cleared. FBI Director Comey laid out all the reasons she was guilty. Then declared (absurdly) that no prosecutor would bring the case. Plus a 2018 DOJ report revealed investigators found 193 classified emails on her private server.

Remember: Hillary destroyed tens of thousands of emails that were under subpoena. Trump’s got the FBI raiding his wife and son’s rooms because he had documents (he is allowed to have) locked up in his basement. Oh, and the very same unit that allowed Hillary to get away with that crime is the same unit hunting Trump.

It gets even better. Hillary accused Trump of “seditious conspiracy.” Hillary! Hillary Clinton! The one who paid for, and signed off on a plot to frame Trump as a puppet of Putin to draw attention away from her own criminal behavior. She enlisted in her conspiracy to undermine the U.S. election and gain power the FBI, DOJ, DOD, Department of State, the CIA, Vice President Biden and President Barack Obama.

Her new show shouldn’t be called Gutsy. It should be called Shameless.

The Obamas returned to the White House Wednesday for the unveiling of their official White House portraits.

Thoughts on the portraits?

Noted investigative journalist Jeff German of the Las Vegas Review-Journal was stabbed to death over the weekend in front of his house. You’d think that would have been a huge story. Kinda curious it wasn’t.

On Wednesday, police executed a search warrant at the home of Clark County Public Administrator Robert Telles. Earlier this year, German had published investigations into Telles, exposing corruption and improper behavior that contributed to Telles losing his primary. German was working on another exposé of Telle when he was murdered. Police will not say if Telles is a suspect in the murder or even a person of interest.

However, they have said the murder was isolated and the public at large was safe. In other words, we have an idea who did it and why.

Telle is innocent, of course, until proven guilty. However, if a liberal journalist was killed while writing about Republican corruption, and police raided the home of the Republican politician the journalist had been writing about, what would be a top news story today?

Sounds like a terrorist threat. After all, this is the woman whose greatest claim to fame is walking around with Trump’s severed head.

Sounds like the liberals are set to use the same tactic as 2020. Re-elect Trump and there will be trouble.

Then you have celebrities like Jennifer Lawrence, who split with her conservative family — particularly her father — after the 2016 election. She tells Vogue she was trying to reconcile after the birth of her child, but abandoned the effort after Roe was overturned. As if her mom and pop were Brett Kavanaugh and Amy Coney Barrett. As if politics is more important than pop-pops.

Is there going to be a civil war? The question is whether the nuts win out. The answer is for those who believe in reason and grace to step up.

By the way, the Oscar-winning actress claims she has recurring nightmares about Fox News host Tucker Carlson. I was going to make fun of Lawrence. Then I remembered the nightmares caused by watching Tucker try to dance on Dancing With The Stars.

Poll: One in Five Democrats Believe Men Can Get Pregnant

22% of Democrats, including 36% of white, college-educated female Democrats believe “some men can get pregnant,” according to a new online survey by WP Intelligence.

In a related survey, 36% of parents of white, college-educated female Democrats believe all the money they spent to put their kid through school went right down the toilet.

Raymond Ibrahim returns with “‘We Are Taking Over Your Country’: The Baby Jihad Revs Up.”

Also a horrifying look at how “Social Media Can Influence Young Girls to Become Transgender.” What happened to “I Love Being a Girl”?

And John Zmirak shares the story of the Irish teacher who would rather be in jail than deny his God. “This Christian Teacher in Ireland Chooses Prison Over Telling Hellish Lies to Children. Would We Do the Same?”