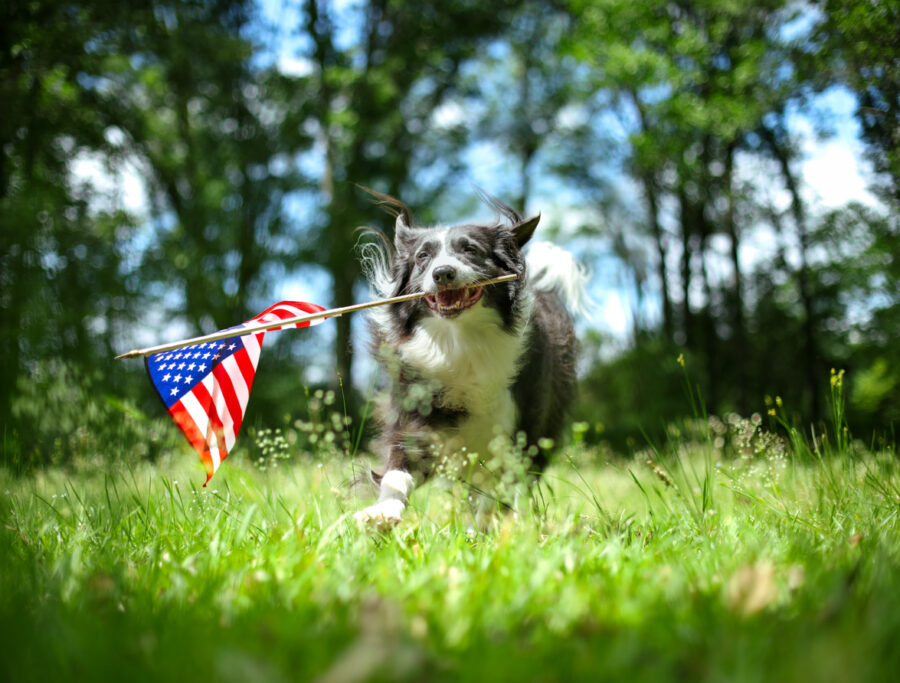 Even dogs know how to celebrate the greatest nation on earth.

Let’s give you a Brew to go with those hot dogs and burgers. And if you like ice cream, we have an Independence Day bit of trivia that will surprise you.

City of Orlando Apologizes After Suggesting They “Can’t Blame” People Who “Don’t Want to Celebrate Our Nation.”

The City of Orlando has apologized — half-heartedly — after plugging its fireworks show with an awful dig on the U.S. The original statement from Orlando included:

A lot of people probably don’t want to celebrate our nation right now, and we can’t blame them. When there is so much division, hate and unrest, why on earth would you want to have a party celebrating any of it?

But in all seriousness, you know in your heart, Fourth of July fireworks are amazing, especially when you are standing in 90° heat, 100% humidity, next to 100,000 of your closest friends.

In that moment, something takes over and we all become united in an inexplicable bond. Yes, America is in strife right now, but you know what … we already bought the fireworks.

After facing fierce backlash, including from the Orlando Fraternal Order of Police, the city released a statement that had it been a firework, it would have fizzled into nothing.

The city of Orlando sincerely regrets the negative impact our words have had on some in our community. We understand these words offended some of our residents, which was not our intent. We value the freedoms we have in this country and are thankful to the men and women who fought and continue to fight for those. We take pride in celebrating the 4th of July to express our gratitude to those men and women and honor the country we live in.

They don’t regret trash-talking America. Only the negative impact on “some.” Then the most bland, corporate crisis manager statement they could get away with.

They deleted the tweet, apologizing not for the sentiment, but for the graphic. Oh, the event they still support.

I wish they would spend five minutes reading China-born Stream contributor Chenyuan Snider’s ode to America: “America I Know: A Fourth of July Reflection.” Chenyuan doesn’t have much patience for those Americans who would curse America.

Or in the following case, ruin it.

Saying It Out Loud: We’re Okay Destroying You Financially to Install Our “Liberal World Order”

Remember when it was a conspiracy theory to say the globalists/liberals in this country were happy to wreck America to install their “New World Order”? “Put away your tin foil hat, Deplorable.”

Well, now they’re saying it out loud. The Borg couldn’t lay out their mission more clearly.

I’m talking about a statement by Joe Biden’s Director of the National Economic Council Brian Deese. He was asked by CNN, “What do you say to those families that say, ‘listen, we can’t afford to pay $4.85 a gallon for months, if not years.”  His amazing response, with the White House as his backdrop:

“This is about the future of the Liberal World Order and we have to stand firm.”

BIDEN ADVISOR BRIAN DEESE: "This is about the future of the Liberal World Order and we have to stand firm." pic.twitter.com/LWilWSo72S

Donald Trump might formally announce he’s running for president again as early as this month, various outlets are reporting. Both the New York Times and CNN reported Saturday that Trump doesn’t want to wait until midterms. That he wants to take advantage of Joe Biden’s dismal polling, and also to ice other Republicans who may be interested in running.

Of course it’s a good time. How many people traveling this weekend would rather have mean tweet and an on-time flight?

Sen. John Kennedy With Another Line That Should Be Carved in Marble

The gift that is Sen. John Kennedy of Louisiana keeps giving. On Thursday night, Kennedy was asked by Fox News’ Jesse Waters his advice for people in crime stricken cities:

“Eat Your Vegetables, Don’t Elect Them.”

Sure, some may cite the Declaration of Independence as Thomas Jefferson’s greatest accomplishment. Or perhaps the University of Virginia. The Virginia Bill of Rights. The doubling of the size of the United States. Kicking pirate butt on the Barbara Coast.

But what about ice cream? Seems Thomas Jefferson is responsible for ice cream finding popularity in the United States. He first discovered ice cream while in France. He was so fond of the stuff, he had special molds and tools flown in from France so he could enjoy ice cream here.  In fact, he may well have had the first recipe for ice cream ever in the U.S.: Six egg yolks, a half a pound of sugar, two bottles of cream and one vanilla bean.

Jefferson also had a large hand in the creation of the American wine industry. A master horticulturist and wine aficionado, Jefferson realized the Virginia hills would be able to grow the grapes necessary to develop our own wines, and argued that wine could become a valuable export for the new country. He tried growing his own vines and make his own wine, but wasn’t all that successful. However, his argument did win the day. A grower near Monticello was successful. And the American wine industry was born.

And to think there are idiots who tear this guy’s statue down and want his name taken off schools.