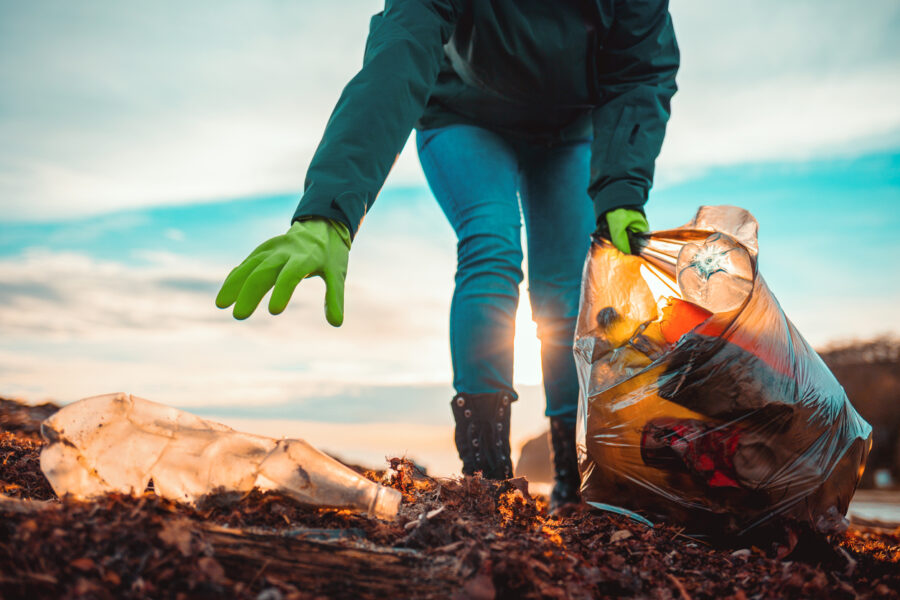 We’ve made it to Friday …

…. Without watching more than five minutes of the Johnny Depp Defamation Lawsuit.

CNN+ Shutting Down After a Mere Month

The dismal failure known as CNN+ is shutting down April 30, after a mere month of existence. CNN confirmed the news of the streaming service’s demise Thursday.

Breaking: CNN+, the streaming service that was hyped as one of the most signifiant developments in the history of CNN, will shut down on April 30, just one month after it launched. Here's our initial story – more to come https://t.co/JElI3cVyDF

Warner Brothers Discovery, the new owners of CNN, tried softening the blow by saying some of the CNN+ programming will become part of a unified streaming effort. But they’re not fooling anyone. CNN spent a reported $300 million to launch the service. However, it reportedly attracted only a scant 150,000 subscribers.

This thing was a bad idea from the start. Like New Coke. Like allowing Joe Biden near the nuclear launch codes. Or getting drunk and harassing Mike Tyson on an airplane flight.

Let’s give some cultural perspective. CNN+ lasted less than half as long as Kim Kardashian’s marriage to Kris Humphries.

Donald Trump had to weigh in: 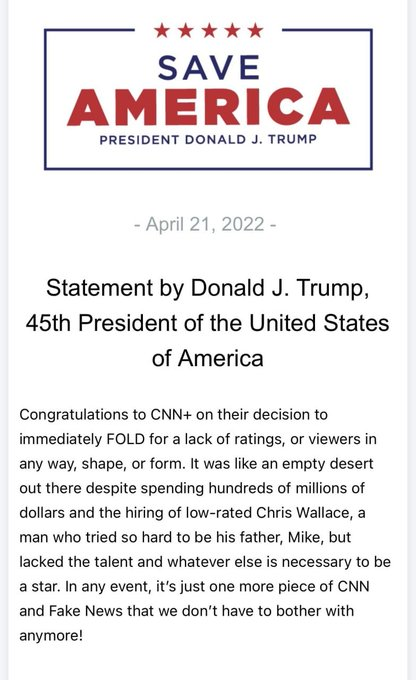 Speaking of Trump and Fake News …

Trump Storms Out of Interview With Piers Morgan … or Did He?

Promos for Piers Morgan’s interview with Donald Trump sure look hot. They show Trump storming out of a very contentious interview. Ooooh, Nelly!

But is that what really happened? Not according to Trump. And even NBC News is backing him up. He says the interview went an hour longer than its planned 20 minutes. Trump released a seven-and-a-half minute audio clip of Trump noting that they had gone way over the time limit and Morgan repeatedly asking more questions. Then Trump Communications Director Taylor Budowich interjected and granted “one last question.”

The last minute or so has Trump and the former Celebrity Apprentice contestant Morgan genially talking about Trump’s recent hole-in-one. The interview wraps with Morgan laughing and saying “That was great.” “Yeah,” replies Trump. And only then does Trump say, “Turn the camera off.”

No doubt there were fireworks. But the promo’s a wee deceptive, don’t ya think? The interview is scheduled to air Monday night. 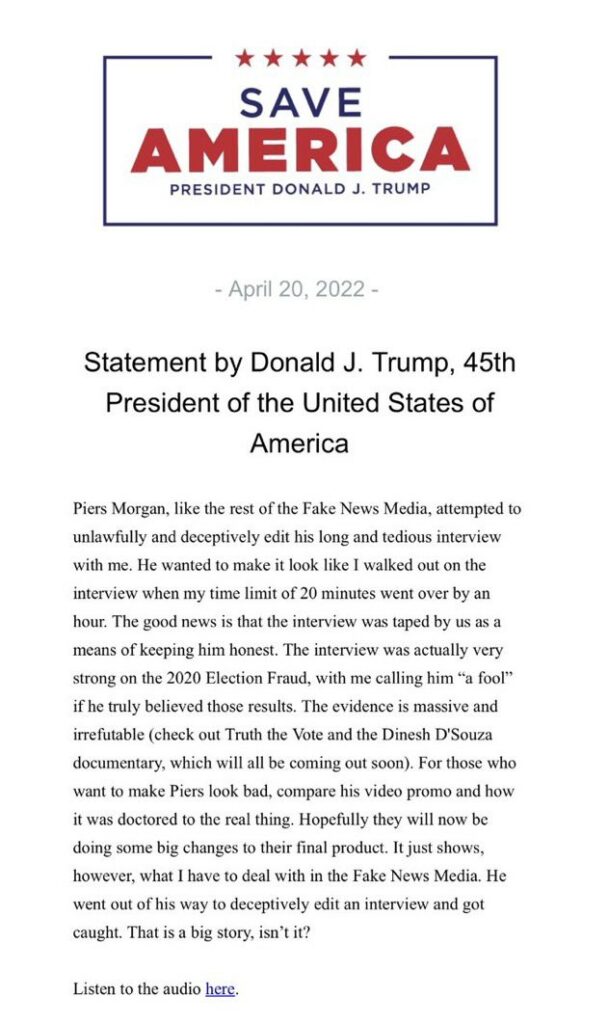 On Thursday, Joe Biden was asked about ending Title 42, the CDC order that helps keep potentially COVID-infected illegal immigrants out of the country. The administration is hell-bent on lifting Title 42 in May, even though it would flood the border with illegal immigrants. (Even vulnerable Democrats are against the idea.)

How did Biden respond? He confused Title 42 with the travel mask mandate. Watch:

His handlers had to release a statement afterwards in his name:

“I want to clarify that, in comments at the conclusion of my remarks this morning, I was referring to the CDC’s mask mandate and there is no Department of Justice action on Title 42.”

The big question: Do the illegals the Biden administration is flying around the country have to wear masks? Or does COVID not spread when you are engaged in human smuggling?

No, Biden Wasn’t Shaking Hands With a Ghost. He Was Pointing.

The latest Biden mental gaffe again has us wondering: When will the forces propping up Biden finally say “enough”? Amazingly, Politifact decided to “fact check” the video of Biden turning around after finishing his speech to shake the hand of people who weren’t there.

They are insisting Biden was merely using his stiff extended hand to gesture to people. Yeah, right.

Now, as Bongino.com points out, because of Politifact’s “fact check,” Facebook will now flag your posting of the Biden video with a “missing context” warning.

It’s Time to Play ‘Are You Carin’ … or Karen?’ NBC Medical Expert Wants You to Bring Extra Masks on Plane to Coerce Those Around You

It’s a cult. NBC News medical contributor Dr. Kavita Patel urges airplane travelers to bring extra masks with them on flights, then coerce … push … those around them to mask up.

“I know this sounds crazy, but if you tell someone next to you on a plane … and just say, ‘I’ve got an elderly mother at home. I’ve got a child with cancer at home, please do me a favor.’ Having the people at least closest to you in that row protecting yourself and them can be the best safety.”

Get the implication? You don’t even actually have to have an elderly mother at home or a child with cancer. Guilt people into putting on a mask … even if airplane cabins filter air like nobody’s business.

Now, in the fantasy world occupied by the media elite, bringing extra masks to pressure fellow airline passengers sounds spiffy. But in the real world? It’ll go even worse than using Thanksgiving to berate your MAGA relatives about Trump.

“Tell you what. I’ll wear the mask if you promise not to exhale the entire flight.” Or …

“No thanks, pal. I’m an Andrew Cuomo supporter so your old mother being offed by COVID is no thang.” Or …

“Wait. You have a child with cancer at home? I’m sure he’ll be comforted to know you’re spending his precious days berating strangers rather than enjoying time with him.”

I kid. The reality will be much worse.

Despite what you may be hearing from some news outlets, Musk’s Twitter bid isn’t just a lark. Or an eccentric billionaire toying with people. On Thursday, Musk revealed in an SEC filing that he’s secured $46.5 billion to finance his Twitter buy-out and is — as we surmised yesterday — considering a tender offer.

So get set for another round of the people who spend 24/7 calling people like us racists, Nazis, homophobes, terrorists, and insurrectionists carping on how a Musk-owned Twitter will open the door for hate speech.

For more than 50 years, Disney Corp. was allowed to self-govern its Florida lands. (The Reedy Creek Improvement District and other such districts that make up Disney’s Florida empire.) The Florida House voted Thursday to end Disney’s cushy deal. Gov. Ron DeSantis pushed for the change after Woke Disney went after the state for its Parental Rights in Education Law.

You know how you know Florida was in the right? Listen to the wailing of Democratic lawmakers as the vote was taking place.

(Can you imagine even a few years ago, Democrats ranting and raving to protect a huge international conglomerate that has tax breaks the little guy doesn’t get? We’re certainly now in Fantasyland.)

Making the hysteria all that more, well, hysterical, is that — as the Associated Press reports — “The measure does allow for the districts to be reestablished, leaving an avenue to renegotiate its future.”

Prediction: DeSantis and Disney will cut a sweet deal.

Perhaps it is coincidence, but on the same day DeSantis put a squeeze on Disney for its Woke indoctrination rantings, Walt DisneyWorld announced Wednesday the end of all remaining mask mandates in the park.

Gov. Mike Huckabee dropped two articles catching up on revelations from the latest John Durham court filing. Most astonishing is the implication that Donald Trump’s movements were being tracked as part of the spying effort.

Stream contributor Alex Chediak has a story that doesn’t seem like a big deal now, but could pay dividends for decades to come. “Tennessee Governor Invites Hillsdale College to Open 50 Charter Schools.”