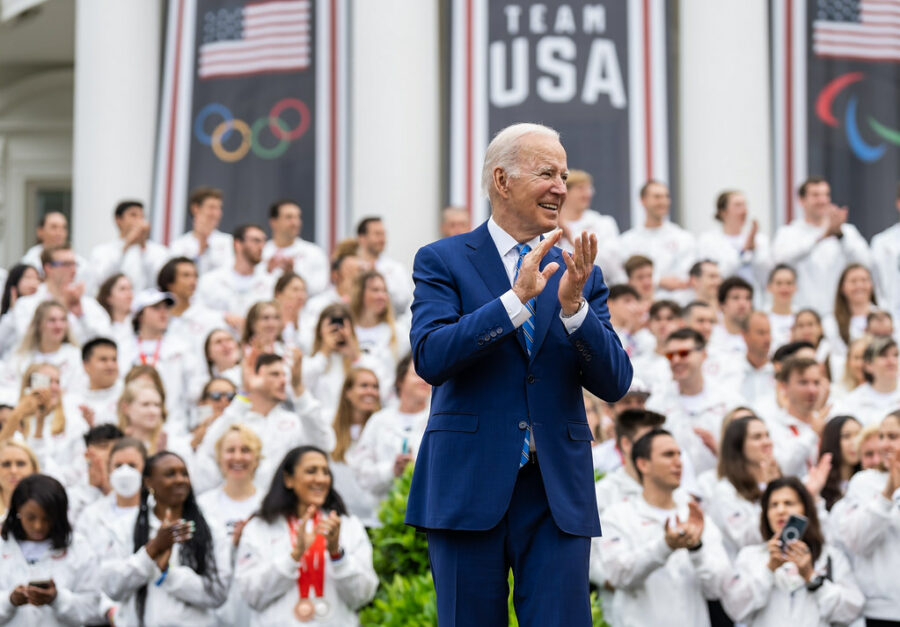 It’s 6 a.m., Bronx, N.Y. Do you know if your congresswoman has faked an arrest yet today?

More on that in a second. But first …

Joe Biden does not have cancer. Thank God. Biden himself is responsible for the confusion, and subsequent trending hashtag #BidenHasCancer. While blasting the oil refineries in his home state during Wednesday’s climate speech Biden spoke in the present tense of having cancer.

“That’s why I and so damn many other people I grew up with have cancer and why for the longest time Delaware had the highest cancer rate in the nation.”

BIDEN: "I and so many other people I grew up with, have cancer."

Did Joe Biden just announce he has cancer? pic.twitter.com/FeZFsbAeMN

What? Did Joe Biden just say he has cancer?! Word quickly spread. The White House was forced to clarify that Biden was speaking of a bout of non-melanoma skin cancers he had removed in the past.

Update: WH official tells me POTUS was referring to past removal of skin cancer in his remarks from Massachusetts.

Biden mistakenly stated (present tense) that he has cancer.

But forget the use of the present tense. No sin in sloppy, colloquial grammar. Problem is, Biden wasn’t even telling the truth. As he has done since the death of his first wife, Biden took a personal incident and twisted it out of shape for political gain. Biden’s doctor Kevin O’Connor released a health report last year on Biden, and talked about the skin cancer.  As the New York Post reports, Dr. O’Connor attributed the cancer to the years Biden spent in the sun over his life, including his stint as a lifeguard.

But you don’t score political points attacking the sun.

Update: AOC Denies She Was Pretending to Be in Handcuffs

Don’t believe your eyes, says AOC. Alexandria Ocasio-Cortez denies she was pretending to be in handcuffs when being led away by cops during a Supreme Court protest Tuesday. Just putting hands behind your back is “best practice while detained, handcuffed or not, to avoid escalating charges like resisting arrest.”

While the cop is treating you as preciously as a prom date? During a PR stunt? When the fellow protester next to you was swinging her arms as if on a powerwalk around the Mall? Suuuuuuuuuure. But we’ll play along. You had your hands behind your back in a manner that just happens to perfect mimic being handcuffed simply as a best practice to avoid accusations of escalating things with police. So why bring your arms suddenly forward and raise a fist? Might a cop not find that threatening?

No faking here. Putting your hands behind your back is a best practice while detained, handcuffed or not, to avoid escalating charges like resisting arrest.

But given how you lied about a fellow rape survivor for “points,” as you put it to me, I don’t expect much else from you. pic.twitter.com/lUc1TPS21D

Good News: The 61-Year-Old Bodega Worker Who Stabbed His Attacker Won’t Face Murder Charges After All

New York’s Soros-Funded D.A. has backed away from the brink. Alvin Bragg announced Monday that he’s dropping second-degree murder charges against Jose Alba, the 61-year-old bodega worker who killed an attacker in self-defense. Alba stabbed ex-con Austin Smith after Smith assaulted him when Alba refused to give Smith’s girlfriend a bag of potato chips.

Although the video of the incident screamed “self-defense,” Bragg charged Alba with murder. And shipped him to the brutal Riker’s Island prison.

However, after a deluge of criticism … to say nothing of the video proof of what happened … Bragg is backing down.

Donald Trump attended his first wife’s funeral Wednesday. Ivana’s casket had more life than the J6 Committee hunting Trump as it ends its run of public hearings. Even with altered clips, selective editing, one-sided witnesses, no-cross examinations and an ABC News producer, the Committee could make no case beyond “Donald Trump didn’t do every single thing he could do to stop the violence on January 6.” (Ignoring that he was rebuffed by Pelosi in his efforts to have the event secured in the first place.)

Mike Huckabee has preview of today’s final day, called “The Theme of Thursday’s J6 Hearing Is a Lie.” Huckabee suggests the committee will be presenting a timeline of events involving Trump that doesn’t jibe with the facts.

Jonathan Turley has a new column on how the committee has overpromised and under-delivered.

Alan Dershowitz ripped the J6 Committee on Newsmax. “I’ve never seen anything like” this hearing, the liberal legal icon said. The committee “does not want the public to hear the other side. That’s why it didn’t permit any cross-examination, any confrontation, any due process, anything resembling fairness.”

By the way, for being a straight shooter, Dershowitz remains an outcast on Martha’s Vineyard. His former summer pals dumped him like a spent clam shell when he defended Trump’s rights, and the shunning continues. Over the weekend, Dershowitz noted how there was an event for Jewish Democrats. “I wasn’t invited because I’m now cancelled essentially from the Democratic Party.” All for standing up for due process and civil liberties. The same items that made him a legal legend, the stuff of movies.

Nothing to See: Pelosi’s Husband Scoops Up at Least $1 Million in Computer Chip Stock Ahead of Congressional Vote on Semi-Conductors

Wonder how Nancy Pelosi can afford $10 a pint ice cream? Her husband Paul is a shrewd investor. Well, more like he does the same thing that put Martha Stewart in jail. But when you’re a congressional spouse …

Paul Pelosi just plopped down between $1 and $5 million for stock in semi-conductor company Nvidia. Right before his wife, Speaker Nancy Pelosi boosted passage of a bill would funnel $52 billion to semi-conductor companies, after the bill floated around for months. The Senate is working on the bill this week.

Pelosi denies having any knowledge of her husband’s trading activities. However, as Just the News reports, Paul Pelosi has a long history of making, um, “timely” stock purchases. #InsiderTrading.

And the media? Ignoring the story, of course. As Fox News noted, CNN, MSNBC and the rest had no problem attacking Republican Richard Burr and other law makers for stock sales made before the COVID crisis hit that suggested inside knowledge of the pending pandemic.

In God’s plan, each unborn human truly has a future filled with potential, talent, dreams and love. I have living proof in my family, my children, and the many thousands that I’ve coached that the unborn are amazing gifts from God to make this world a better place. To me, the right choice is to have the courage to let the unborn be born.”

Naturally, he got slammed by critics. Which is nothing new for the veteran coach.

Give a cheer to Harbaugh for stepping up. He works on an American campus, after all, where universities are handing out abortion pills like directions to the cafeteria. And girls are indoctrinated with the belief they can’t accomplish anything in life unless they terminate their pregnancies.

Still, coaches being coaches, you have to wonder if in a corner of his brain he’s thinking, “and every unborn child holds the potential to be the quarterback I need to defeat Ohio State.”

Later today, Ohio State fan Timothy Furnish will offer a salute to Harbaugh — as painful as it may be.