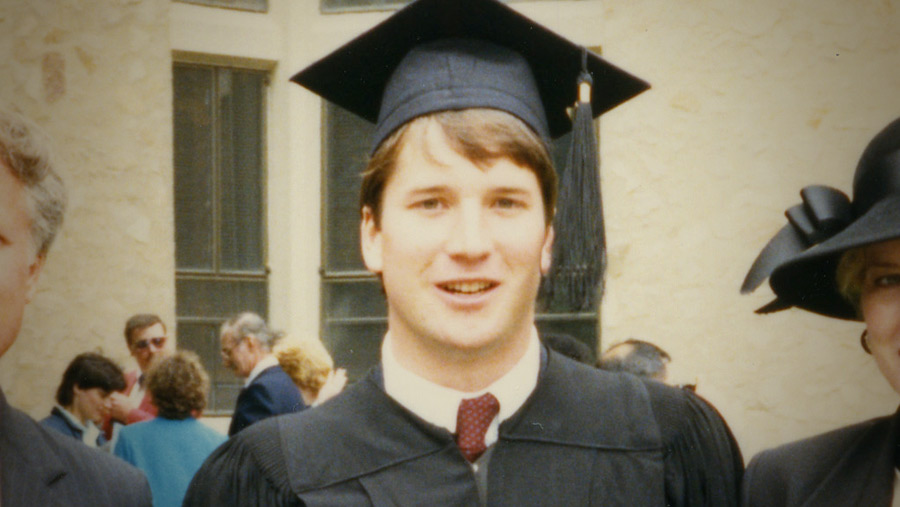 Remember the beautiful, bipartisan world of civic virtue and common patriotism we saw at John McCain’s long series of funerals? The pretty picture of elites from both political parties, gathering to inter him in his pyramid. The long speeches aimed (pretty clearly) at Donald Trump and his supporters? They showed us a world where both sides can play by the rules. Where everyone loves our country, and deserves a decent respect. … Except of course for ugly extremists like a certain real estate magnate who seized the White House, who will remain nameless. (Wink, wink.) Michelle Obama held hands with both George Bush and Barack. They smiled like sated cats in a pile of yellow canary feathers.

Two days later, Democrat activists were hiring random people off the street to scream through a Supreme Court nomination hearing. One guy was wearing a full body condom, handing out tracts to senators. Within ten days, Senator Feinstein was leaking vague, shaky, career-ending charges against Brett Kavanaugh which she’d sat on for months. The same media that crooned over John McCain’s patriotism were trying to destroy a Supreme Court nominee he’d supported.

What happened to that happy, bi-partisan fairy land of a few days before?

It vanished and went back to green screen. Turns out, it was all CGI.

And I’ve got to wonder what Brett Kavanaugh is thinking.

He Did It Right, Even as I Blew It

I was at Yale at the same time as Brett Kavanaugh, but I never heard of him. He probably heard of me, since I made myself infamous doing all things you’re not supposed to do. Writing pro-life, anti-gay-activist editorials in The Yale Daily News. Marching outside Planned Parenthood just off campus on the Roe v. Wade anniversary. Reacting to the radical leftist buttons and t-shirts I saw everywhere … by sporting Soldier of Fortune’s “Better Dead Than Red” shirt. Taking part in the outlier, virtually outlaw Party of the Right, which played at being monarchist.

When I came in the dining hall, tables would fall silent until I’d passed. By the end of my freshman year, some campus rag did a name recognition survey on campus. I came in behind Jodie Foster, but ahead of Jennifer Beals. That wasn’t because I was beloved.

What wasn’t I doing? Large parts of the reading on my syllabi, for one. (I’m still going back and reading stuff I only skimmed back then.) More crucially, I was squandering the single biggest opportunity an Ivy experience offers you: making long-term connections, with the people who will someday be running politics and business in America. Nope. My friends were all would-be intellectuals, and most them ended up academics. One or two are journalists. None of them could help me in any material way. Nor could I do much for them. I might as well have gone to correspondence school.

Playing by the Rules

Meanwhile, from all reports, Brett Kavanaugh was doing all the right things. Keeping his head down, doing all his reading, making friends, playing sports, keeping calendars, no doubt going on dates. He joined the last fraternity which had survived on campus, and probably talked about his views with his fellow DEKEs. He doubtless graduated with a perfect GPA, because he went on to a top-notch law school. Then a stellar legal career. The friends he’d made had other friends, who introduced Kavanaugh to the Bush family. That doesn’t hurt.

I’ve always been glad that there were people with views close to my own who knew how to play by the rules. Who could get through major law schools, without getting chased off campus. Who could keep their public record bland enough to get confirmed as judges. Who’d convene in groups like the Federalist Society, and quietly counter the overwhelming power of the left. Some people need to stick around in the “mainstream” institutions and fight the good fight, while the rest of us with looser tongues try to rouse the zealots.

Of course, the two factions of conservatives haven’t always gotten along. In fact, the more raucous among us — who contribute much of the energy, spunk, and bold ideas — have been getting a raw deal since 1996. That’s when the GOP establishment smacked down Patrick Buchanan. (You won’t remember it, but Bob Dole called in his favors on the Christian Right to squash him in South Carolina. Bob Dole, that great culture warrior, and Viagra spokesman.) The GOP began to energetically purge Buchanan’s kind (and mine).

By the 2000s, conservative vistas narrowed on a thin, elitist, and poorly thought-through globalist ideology. It focused on boosting “democracy” around the world, and looking out for big business. That meant shoving aside “divisive” social issues like abortion, marriage, and gun rights — except as “red meat for the rubes” when they needed to boost GOP turnout. That was the world the Bushes made, the world Brett Kavanaugh lived in. (Now I have no way of knowing the man’s real views on these subjects, which might well be perfectly sound. But one reason he’s confirmable is that he never made noise about them.)

In the Bush world, it was “mainstream” to back gay marriage (as Jonah Goldberg did back in 2003) or favor legal abortion (as Charles Krauthammer did). But talk too loud about the problem of immigration? Oppose the Iraq War as a risky, ill-considered adventure? That meant you belonged in the fever swamps. As late as 2008, the GOP could look at a populace deeply worried about immigration, and worn out by the Iraq war … and nominate John McCain, an open-borders hawk, who joked that the U.S. might need to keep troops in Iraq for “a million years” for all he cared. I’ll never forget the open contempt and mockery which “mainstream” conservatives aimed at Ron Paul and his supporters, for taking positions identical in most ways to Ronald Reagan’s.

McCain didn’t really try to win the 2008 election. He didn’t bring up the ugly, “divisive” far-left things, people, and statements linked to Barack Obama. Instead he set out to accomplish exactly what he did: lose gracefully, and become once again the favorite Republican among Democrats. Four bleak years of really divisive, destructive leftist policies later? Mitt Romney followed the same playbook, and just as predictably … lost.

It was a kind of Christmas miracle in 2016 when Republicans finally started waking up. Jeb Bush stepped forward, since it really was his turn to be president. A few clones ran against him, in the forms of Marco Rubio, Lindsey Graham, and John Kasich. But nobody was buying. They’d had enough of losing gracefully. Enough of playing nice in a game where the other side sets the rules and owns the umpires.

Instead, the raucous, unclubbable, outlaw types were trending. You had three candidates in a single GOP debate — Rand Paul, Ted Cruz, and of course Donald Trump — openly say the unspeakable. Namely, that maybe the U.S. military shouldn’t be the global police. That promoting “democracy” in Muslim countries where majorities wanted sharia wasn’t in our interest. That maybe the GOP’s policy shouldn’t always be: “However far left the Democrats go, we’ll reduce that by 25%. That’s a promise.”

That might have been fine when Democrats were like John F. Kennedy or Hubert Humphrey. It absolutely isn’t when they’re like Rep. Keith Ellison (domestic abuser, and friend of Farrakhan). Or Rep. Maxine Waters, who wants to hunt Republican office holders as if they were pedophiles. Or Sen. Mazie Hirono, who doesn’t think conservatives deserve the presumption of innocence on rape charges. No, really. See below:

CNN’s Jake Tapper: “Doesn’t Kavanaugh have the same presumption of innocence as anyone else in America?”

Sen. Mazie Hirono: “I put his denial in the context of everything that I know about him in terms of how he approaches his cases” #CNNSOTU https://t.co/E2UoZMzNhN pic.twitter.com/3mDb8ysskj

Welcome to the Desert of the Real

Donald Trump saw, more clearly than most, how deranged and unhinged the left has become. And how much of our “mainstream” it has annexed, and fully dominates.

I think that good old Brett Kavanaugh sees that now in a way he never did. Let’s pray that he gets confirmed, as he deserves to. And hope that he’ll be much closer to Clarence Thomas now than he otherwise would have. They’ve been through the same patch of hell.