John Zmirak, author of several books on Catholicism, takes on a new article in the Atlantic that slurred the Rosary as a hate symbol on the Feast of the Assumption. 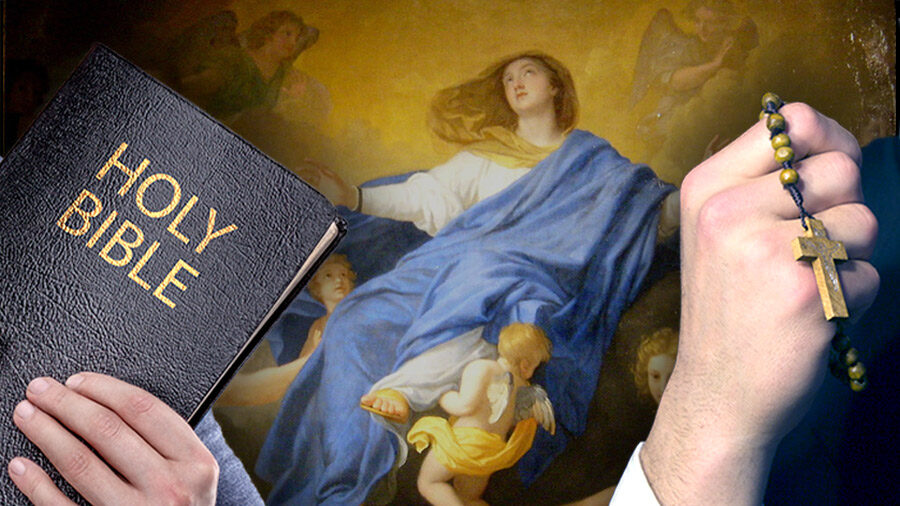 The Atlantic magazine should be commended for the candor of its own marketing slogan: Disappointing Dental Patients in Waiting Rooms for Longer Than We Care to Remember.™

Wait. Maybe that was a parody I wrote. These days, when the presidential cabinet resembles the Star Wars Cantina (see tomorrow’s column), I really can’t tell anymore. If there is a top-level conspiracy, it’s one designed to put us satirists out of business. That’s why The Babylon Bee gets fact-checked, but secret FISA spying warrants don’t.

I do know that puckish trolls have been outraging online censors by creating fake memes of outrageous, fictitious stories allegedly from The Atlantic, embodying its distinctive stance and tone: That of a nasty eugenicist visiting sedated patients in an old-style state mental hospital, addressing them in quasi-baby talk like a bitter kindergarten teacher or former Vice President Gore. And meanwhile marking on his chart the date when the patient is to be sterilized.

Hate Groups = Groups Whom We Hate

At least one recent story in The Atlantic isn’t dull. Instead, it’s a religious slur published on a major Catholic Church holiday. That’s right, The Atlantic chose the Feast of the Assumption to run its piece linking the Rosary to … a wild nexus of associated hate groups and hate speech.

By that I mean groups whom Atlantic editors and readers believe it’s okay to hate and deprive of free speech. These include pro-lifers, gun owners, opponents of child castration, skeptics of gender theory, Trump supporters, and other dangerous troglodytes.

One Atlantic author was apparently shocked to learn that some members of these groups aren’t literal snake-handlers, members of the Westboro Baptist Church, or part of the racist Christian Identity movement. Nor even “retrograde” Southern Baptists whom Russell Moore hasn’t yet managed to debone and encase in aspic.

The Cult of the Breakfast Tacos

No, they’re Catholics, like so many of those fabulous immigrants whom Atlantic readers call upon to deliver them breakfast tacos, albeit they won’t live near them, nor send their kids to the same schools. And that demographic fact doesn’t fit the simple, crudely-drawn categories that fill the minds of IQ-95 intellectuals.

I’m firm man, but not a cruel one. I’ll only inflict on my readers a tiny sample of what The Atlantic did not have the decency to veil behind a paywall:

Militia culture, a fetishism of Western civilization, and masculinist anxieties have become mainstays of the far right in the U.S. — and rad-trad Catholics have now taken up residence in this company. Their social-media accounts commonly promote accelerationist and survivalist content, along with combat-medical and tactical training, as well as memes depicting balaclava-clad gunmen that draw on the “terrorwave” or “warcore” aesthetic that is popular in far-right circles.

There’s more like that, some thousands of words, arranged in what were apparently meant to simulate grammatical sentences in a real human language. The writer cites perhaps the thickest American bishop, Daniel Flores of Brownsville, TX — who once taught that deporting illegal immigrants was equivalent to aborting innocent babies. (The fact that this equated several Latin American nations with medical waste dumpsters apparently eluded him.)

Is every Catholic who came across the Atlantic essay laughing at it? No, only those who know what the Feast of the Assumption actually refers to. In cold fact, it doesn’t mean “lazy assumptions you make about your political enemies based on some meme you saw once.”

It refers to the Catholic dogma that the Blessed Virgin Mary, like the prophet Elijah before her, was taken up into heaven at the end of her earthly life. This is a belief shared by Orthodox and Anglicans, and it seems to date back to the early Church — since liturgical celebrations of it spread to India, Armenia, Ethiopia, and other countries evangelized in the first few centuries of Christianity.

A Woman of Extremes

I will admit that there is a lot about the Virgin Mary which we could legitimately call “extreme,” especially according to Catholic teaching. We believe that Mary got pregnant while still a virgin, being married in some mysterious manner to God. That she remained a virgin all through her life. That she never personally sinned, because she was the unspotted vessel of the Incarnate God. In fact, since 1850, we’re required to believe that God preserved her from Original Sin, imputing to her the grace of baptism in the womb, by the grace of her son’s Redemption.

These are radical claims for a radical woman, in whom the Root of Jesse planted itself and grew. We know from scripture that Mary — unlike women in pagan myths — was asked by God’s messenger whether she would accept her maternal mission. She could have said “No,” and it wouldn’t even have been a sin. She said yes, of course, making her the model Christian.

Also from scripture we know that Mary occasioned Jesus’ first miracle, at Cana. And that she was one of the few to remain with Him at the Cross, along with the apostle St. John. There Jesus committed John (and the Church) to her as a spiritual son. Catholics believe that Mary is the “woman clothed by the sun” described in Revelation. That’s why we usually picture her treading on a serpent.

Prayers from the Bible

The Rosary, for those of you not familiar with it, consists of a series of prayers and meditations, virtually all of them taken from scripture. We pray the Our Father (which Jesus taught us), the Hail Mary (which quotes the angel Gabriel), and the trinitarian prayer “Glory be to the Father, to the Son, and to the Holy Ghost.” We meditate on key events in the life of Jesus. The purpose of it? To focus us on the story of our salvation, the need for holiness, and the love of God.

For this reason, the Rosary has indeed been a powerful weapon in the hands of Christians, historically. Its use played a major role in defeating the crazy, gnostic Albigensian heresy. A Europe-wide “rosary crusade” decreed by a pope preceded the almost miraculous victory of the Christians over the Muslims at Lepanto. To mark that, the pope placed the Feast of Our Lady of Victory on the anniversary of that battle. (To mark it, I myself bought for my personal handgun a Beretta, made by the same Venetian company that forged the cannons we used at that battle.)

On the Feast of the Assumption in 1920, Christendom was menaced again, by a threat worse than the Mongols: the armies of Bolshevik Russia, invading the infant nation of Poland, to spread its godless revolution to Germany, then all of Europe. The outmanned, outgunned Polish armies crushed the Bolsheviks outside of Warsaw, after thousands of soldiers reported seeing the Virgin Mary appear to them in the sky, urging them to victory. Poles still call that battle “the Miracle of the Vistula.”

This is one dangerous lady, if you’re on the side of the demons. Nothing lukewarm about her. She’s fanatically orthodox, doctrinally rigid, and not even winsome. She had the temerity to tell people, when Jesus spoke, “Do whatever He tells you.” That has no place in the America of the Former Joe Biden, or The Atlantic.

I have an idea for The Atlantic. It ought to rename itself not for a vast, adventurous ocean but a stagnant, polluted man-made strait in New York City. I can see it now, as I wait for my root canal: The Gowanus: Turgid, Full of Garbage, and Only Relevant in Brooklyn.™

Christian Nationalism or Gay Sharia: There Really is No ‘Option C’