The Betsy DeVos Battle is Key to the Culture War 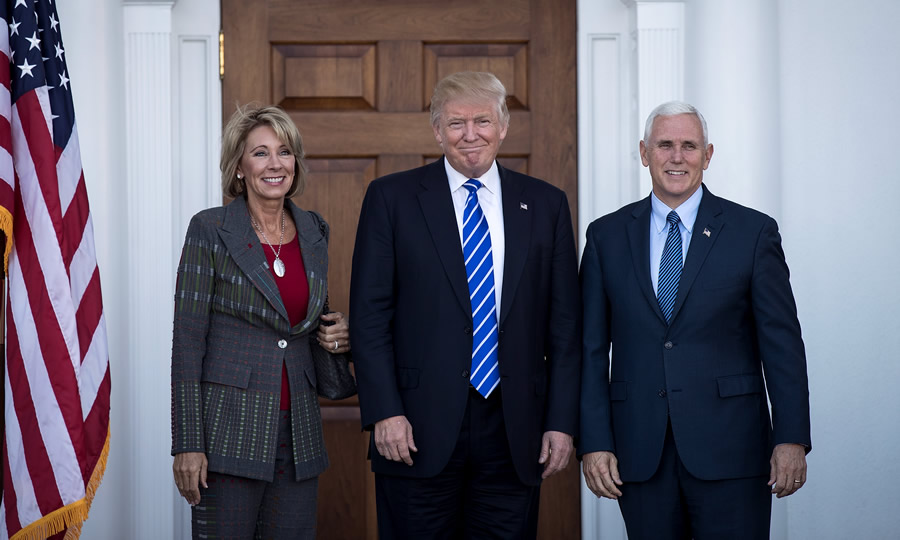 Who would have thought that one of the nastiest confirmation battles a Donald Trump appointee would have to face would be the choice for Secretary of Education? But over the last week, the attacks against philanthropist and education activist Betsy DeVos have been shrill and unremitting.

The barrage aimed at DeVos has been scattershot, as Democrats throw at her everything they can find, to see what sticks to the Senate hearing room wall. Rich Lowry has ably unpacked the most unfounded charges against DeVos, which focus on her advocacy of

This last point is especially chilling. DeVos is being grilled for having given her own family money to private-run schools that share her Christian views (as opposed to tax-fattened government schools), and for donating to Focus On the Family — which opposes same-sex marriage, much as eight years ago Barack Obama and Hillary Clinton claimed to oppose it.

Should Political and Charitable Donors be “Outed” by the IRS?

Why should private donations to religious, political and charitable causes be fodder for a confirmation hearing? In a non-totalitarian country, there’s supposed to be a bright line between one’s public and private life. Constitutionally, the government may not impose a religious test on employees. But “campaign finance reform” laws championed by leftists and some addled Republicans (such as John McCain) have removed any veil of privacy from how citizens choose to spend and donate their own money.

In her eye-opening new book The Intimidation Game, Kim Strassel of the Wall Street Journal documented how the exposure of private donations has become a tool to silence conservative dissent. Remember how the co-founder of Mozilla, Brendan Eich, was forced out of his own company after an LGBT freakout over his one-time gift to a pro-family organization? Now we are seeing the same kind of witch hunt on the floor of the U.S. Senate. As Strassel points out, the exposure of donors to political organizations was used by segregationists in the South to intimidate and try to crush the NAACP. Now faithful Christians and conservatives are the targets of choice. (For an organization that seeks to protect political speech by restoring donor privacy, check out the Pillar of Law Institute.)

The secular left has long understood better than the church that politics lies downstream of culture. So progressives aim to grab and keep control of the levers of culture: the arts and education.

The Left Wants Your Kids

The secular left has long understood better than the church that politics lies downstream of culture. So progressives aim to grab and keep control of the levers of culture: the arts and education. (Not to go off on a tangent, but the mau-mauing of any performer willing to appear at Trump’s inauguration is part of the cultural control effort in the arts — as was the attempt to destroy Chip and Joanna Gaines.)

It is plainly true, as the late Whitney Houston noted, that “children are the future.” With that in mind, leftists have sought to impose elite control over American education for more than a hundred years. Few outside of conservative home-schooling and libertarian circles remember it, but public schools were originally a project of progressives like Horace Mann who wished to pry children away from their parents’ religious values and homogenize them as forward-thinking Americans.

On this theory, kids from conservative Protestant or immigrant Catholic families would be gently but firmly led by progressive teachers away from their ancestral “superstitions,” and molded as citizens of a secular Republic. Social Gospel advocates cooperated with outright non-believers in the effort to impose Enlightenment norms on the children of a broadly Christian country. Radical secularists in France, Mexico, and other nations with deep Christian cultures made similar efforts. It was only decades later that Antonio Gramsci put a directly Marxist spin on this effort, crafting a program for radicals to ferret their way into positions of control all through the institutions of culture.

For decades this project stalled in the United States, as local school boards kept public institutions in many places effectively Protestant and culturally conservative — while impoverished Catholics like my ancestors decamped and set up their own parallel school system, privately funded by pennies from recent immigrants, and staffed by thousands of willing, unpaid nuns and religious brothers.

Neither of these barriers survived the 1960s. Federal court decisions against school prayer, massive federal intrusion in the name of desegregation and “diversity,” the growth of politicized teachers’ unions, requirements that teachers be processed through “education” programs with mostly leftist orientations, and the growth of politicized teachers’ unions have combined to dilute the influence of school boards in all but the most conservative communities. The collapse of religious vocations has stripped Catholic schools of their once-vast labor pool, and forced such academies to survive on what tuition parents can afford — on top of the school taxes they paid. Around the country, even Catholic schools with excellent track records are closing due to costs.

Now cash-rich teachers’ unions, which have long been linked to politically radical causes, are trying to seal the last few cracks where dissent can live. They are leading the fight to prevent the confirmation of Ms. DeVos. As the Washington Free Beacon reports:

Three of the groups challenging the reform agenda of President-elect Donald Trump and his education secretary nominee Betsy DeVos received more than $2.6 million from teachers unions and their allies, according to federal labor filings…. The National Education Association, American Federation of Teachers, and AFL-CIO, which serves as an umbrella group for dozens of unions including the AFT, have all called on the Senate to reject the nomination.

They have also pumped millions of dollars into think tanks and activist groups that have supplied Democrats with intellectual ammunition to oppose her.

Beyond the desire of leftists to indoctrinate the next generation, there’s a clear financial motive here: Teachers unions know that charter schools impose stricter standards that allow them to discipline often-incompetent teachers, while vouchers let parents escape the tyranny of school districts imposed by zip code. Those who consider traditional religion dangerous in itself are troubled by the idea of letting parents whose kids use church-based schools claim back some of the taxes they pay for public schools. That undermines the whole point of public education, as they see it.

Are Vouchers Just a Leash in Big Brother’s Hand?

There is also great concern about her support of voucher programs imposing Common Core on private and potentially home schools, and extensive student data mining. These concerns are especially acute given President-elect Trump’s encouraging and repeated promises to get rid of Common Core, protect privacy and decrease or eliminate the federal role in education.

A debate has long simmered among religious conservatives over the wisdom of promoting federally-financed school voucher programs, given the track record of the federal government at imposing faith-busting mandates on religious institutions, such as the Little Sisters of the Poor.  Just in 2016, the state of California came within a hairsbreadth of demanding that Christian colleges renounce their stances on marriage and sexual morality or face the loss of tens of millions in federal aid, on which such colleges have become financially dependent.

Could religious schools that accepted such aid from a President Trump find themselves over a barrel under a future Democratic president? Could home schoolers who received vouchers face a “transgender” mandate like President Obama’s, which affected local schools across America? If we have learned one thing in the past eight years, it is to put absolutely nothing past the left. If we can imagine it, soon enough progressives will try to get away with it.