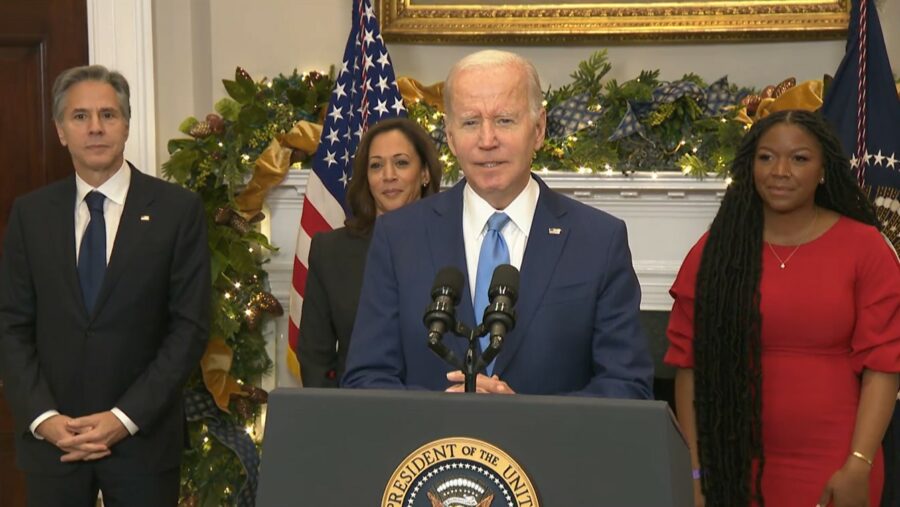 I have to say I’m greatly disappointed that more has not been done to secure my release, especially as the four year anniversary of my arrest is coming up. I was arrested for a crime that never occurred. I’m happy that Brittney is going home today and Trevor went home when he did, but I don’t understand why I’m still sitting here. My bags are packed, I’m ready to go home. I just need an airplane to come and get me.

“Moments ago I spoke to Brittney Griner,” Biden said. “She is safe. She is on a plane. She is on her way home.”

Tune in as I deliver an important announcement. https://t.co/2BVdSsmIFA

So let me get this straight. We are sending billions and billions in weapons to Ukraine in order to fight a proxy war with Russia, and we just sent Russia the world’s most notorious and dangerous weapons dealer? For a basketball player?!? (And one with a history for knocking the U.S. at that.)

Please tell me we at least got some high draft picks too.

A Woke Celebrity Freed Instead of Brave Marine Vet

Griner had been given 9 years hard time for trying to smuggle cannabis oil into Russia. Her bad fortune was to try it as tensions between U.S. and Russia were sky high over Russia’s invasion of Ukraine. Putin took his opportunity to squeeze and sweat the U.S. (at Griner’s expense).

Biden and his feeble Secretary of State Tony Blinken had been trying to secure Griner’s release from the beginning, to no avail. There was talk in August of a possible deal involving Bout. But — and this is where today’s news gets infuriating — in that swap we would also get back Marine vet Paul Whelan. Whelan, now a corporate security official, has been in a Russian prison since 2018 for what his family and the U.S. insist are bogus charges.

However, in the end, it appears the U.S. caved and gave up the Merchant of Death for an America-trashing celebrity … and left our Marine vet behind. Can this White House slap our military and sink morale any further?

Now I say “appears” because it’s possible there’s a side deal, a quiet agreement to release Whelan before too long. Say as a gesture of goodwill at Christmas.

Then again we’re talking about Biden. Sure, he talked today about the U.S. “has not forgotten” Whelan. But as VP he was part of that infamous and utterly incomprehensible prisoner swap with the Taliban where we gave them back five terrorist leaders in exchange for deserter Bowe Bergdahl. Four of those terrorists went right back to being Taliban commanders and are now in high Afghan government positions.

Reaction to the Deal

You’re seeing a lot of negative reaction on Twitter to the deal. Both on the fact that Whelan was left behind, and that the deal was so one-sided. Charlie Kirk is a fair example.

U.S. Marine Paul Whelan should have been the Biden Regime’s higher priority, that’s a fact. But under no circumstances should an international arms dealer who targeted US citizens, the MERCHANT OF DEATH Viktor Bout, have been released. This is pure idiocy.

Help me wrap my mind around this Griner-for-Death trade. Feels like one of the lowest points in US foreign policy history? Or am I exaggerating? Give me some perspective. What compares? Bay of BIG 2.0?

(Though my favorite tweet is the guy in response to Whitlock saying, “Suddenly Russell Wilson trade is the 2nd worst trade of 2022.”)

Donald Trump, Jr. tweeted about the dangers of making this deal.

You guys know how to make sure Putin keeps arresting Americans and severely punishing them?

Trade him an arms dealer aka “The Merchant of Death” someone guilty of conspiring to kill Americans and aiding a terrorist organization for an America Hating WNBA activist.

Be honest, our beloved liberal friends, do you really think President Trump would have let Griner languish in a Russian prison for nearly a year, only to end up securing her release by giving Russia a deadly weapons dealer with a history of killing Americans? I don’t think so.

Still, one family’s reaction weighs more than most: The family of Paul Whelan.

You would think they would be outraged. And perhaps behind the scenes they are. However, Whelan’s brother, David Whelan, released a statement on Griner’s release that is pure class, saying,

There is no greater success than for a wrongful detainee to be freed & for them to go home. The Biden Admin made the right decision to bring Ms. Griner home, & to make the deal that was possible, rather than waiting for one that wasn’t going to.

You are seeing that quote cited by people defending the deal. They left out the rest of the statement.

She will be reunited with her family. Brittney is free. And Paul is still a hostage. But how many more times do I need to write that? Despite the possibility that there might be an exchange without Paul, our family is still devastated. I can’t even fathom how Paul will feel when he learns. Paul has worked so hard to survive nearly 4 years of this injustice.”

He noted this is the second time this year the U.S. has made a prisoner swap with Putin that didn’t include Whelan. “How do you continue to survive, day after day, when you know that your government has failed twice to free you from a foreign prison?”

This Deal Will Likely Backfire, But We Hold to Hope

So, yeah. Giving Russia back “The Merchant of Death” is guaranteed to come back and haunt us.

Yeah, showing Russia and other bad actors they can grab Americans on minor infractions and score major benefit is going to cost us plenty.

Yeah, prioritizing a basketball player over a Marine vet is bad form.

But let us join the Whelan family in gratitude that Griner is freed, and remain hopeful that we are watching a carefully choreographed play that will soon see the quiet release of Paul Whelan.

In the meantime, we pray for Whelan, his family and all American political prisoners abroad … and at home.