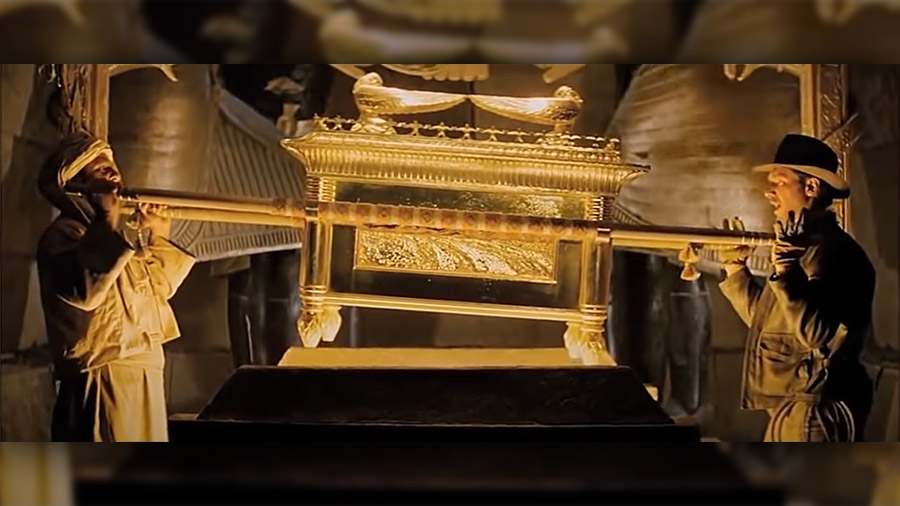 In this screengrab from Raiders of the Lost Ark, Indiana Jones, played by Harrison Ford, and Sallah, played by John Rhys-Davies, reveal the Ark of the Covenant. This week marks the 40th anniversary of the premier of the film.

“For nearly 3000 years man has been searching for the lost Ark. It’s not something to be taken lightly. No one knows its secrets. It’s like nothing you’ve ever gone after before.” So Dr. Marcus Brody warned Dr. Henry Jones, Jr., aka “Indiana.” That was in Raiders of the Lost Ark, probably the single best adventure movie ever made. But its success, and cultural influence, has indeed proved Brody right. Many do now take the most fearsome object in biblical history too lightly. How could they not? The legion of parodies practically assures it. (Although some, like this famous Simpsons one, are priceless.)

The Ark in Reel, and Real, Life

The Ark is now back in the news. Both cinematically, and in real life. It was 40 years ago this week that Raiders premiered. And now the fifth Indiana Jones movie has commenced filming. But much more importantly, blood has been shed, again, over the Ark. Earlier this year, a story surfaced that over 800 Ethiopian Christians had been killed protecting the artifact. From whom? Ethiopian Orthodox Christians claim that the lost Ark is on the grounds of Our Lady of Zion Church in Axum. And that this church was attacked last fall by regional rebels. No doubt this was the Marxist Tigray People’s Liberation Front (TPLF), which has been designated a terrorist group by the Ethiopian central government. Such an organization would have little love for Ethiopian Christianity’s greatest relic.

Before vetting that claim, let’s recap the biblical background from Exodus (chapters 25 and 37). God told Moses to instruct the Israelites, still wandering through Sinai c. 1200 BC, to build the Ark. The actual Ten Commandments were then placed inside (“if you believe in that sort of thing,” Indy told the Army Intelligence chaps). Hebrews 9 adds further details: that the Ark also contained some manna, as well as Aaron’s rod.

The Ark remains a fascinating archaeological topic. So I want top men to continue searching the globe for it.

The Ark’s main purpose, however, was not merely as a holy lockbox. Rather, it was the center of the Tabernacle, the “dwelling place” of God with His people. The Bible does NOT “speak of the Ark leveling mountains and laying waste to entire regions.” But the book of Joshua does say that it parted the Jordan River and helped topple the walls of Jericho. I Samuel also describes the Ark as visiting plagues upon the Philistines who had captured it, and even killing many non-priestly Israelites who dared to look upon it. After the Kingdom of Israel was established, Solomon built the Temple in the 10th century BC, and placed the Ark within the Holy of Holies. There it remained until 587 BC, when the Babylonians conquered the remaining Israelite kingdoms and sacked Jerusalem, destroying the Temple. The Ark disappeared from history after that.

Where Did It Go? Western and Christian Theories

What happened to it? Some say the Babylonians either destroyed it, or carted it back as booty. Others, like the Israeli archaeologists in a recent Discovery channel special, think the Ark was hidden under the Temple Mount. Or in the graves across the Kidron Valley. In either case, that it’s still there in Jerusalem. There are also proponents of the Raiders taken-by-the-Egyptians thesis. Graham Hancock first proposed the aforementioned Ethiopia theory in 1992. Although considered crackpot, it has gained traction in recent years. The Ark-in-Axum thesis has been the topic of many TV specials, most notably a 2017 episode of Josh Gates’ “Expedition Unknown.” There’s also a claim that it took a circuitous route, via Yemen, to Zimbabwe.

Where It Went According to Islam

One little-known idea comes from Islamic traditions. These hadiths have a different take on the Ark altogether. Not just on where it wound up post-Babylonian conquest. In them, the Ark goes back to Adam’s time. It was indeed a weapon (which was why Hitler wanted it in Raiders). Solomon sent it to Ethiopia. Then it was given to Muhammad by an Ethiopian Christian king who had secretly converted to Islam. After Muhammad it was hidden either in Antioch or Lake Tiberias (the Sea of Galilee). Thence the Mahdi will claim and wield it, when he comes as part of his divine imprimatur. That theory is about as likely as the Ark being in a vast government warehouse. Actually, less so.

So What If the Ark is Found?

One of my seminary systematic theology professors had a novel approach. He said that study amounted to asking “so?” After you’d ascertained that, the question became: “so what?” What difference would it make if the Ark of the Covenant still existed? And if it were found?

Well, that depends on where and how it happened. If a Muslim leader fished it out of the Sea of Galilee, Islam might experience a huge convert boom. Among other kinds. But as a historian, and Christian, I simply can’t take that religion’s claims on this matter seriously.

So let’s assume it’s found by a modern-day Indy — preferably one that goes to church, or synagogue, more regularly. If it’s in the Temple Mount vicinity, Israeli authorities would no doubt claim it. And why not? It was built by their ancestors. In this case, the Orthodox branch of Judaism would probably gain converts. If the Ark were taken from Palestinian jurisdiction in Jerusalem, we might see another Arab-Israeli war. Hopefully, the disproving of the hadiths on its location would prevent that. It might even cause more Muslims countries to make peace with Israel.

What if Josh Gates goes back to Africa and actually finds it? Well, besides his ratings skyrocketing, one can well imagine the IDF being sent to seize it. (Actually, some say that’s already been done.) In addition, the reappearance of history’s most-revered artifact might just convince many atheists that God exists, per a recent novel. That would be a very good thing. Alas, the Ark is neither a weapon nor “a radio for speaking to God” (as Indy’s foil Belloq called it). So it would be most valuable as a symbol of the Old Testament’s veracity.

Would It Matter to Christians?

But what would it mean for Christians? Well, actually, very little — at least theologically. The Ark and the Tabernacle, as important as they were in their time, are but types of the heavenly sanctuary and the new covenant instituted by the atoning death and glorious resurrection of Jesus Christ. (See Hebrews, chapters 7-10). The Ark’s mercy seat cannot hold a candle to the Cross.

But the Ark remains, nonetheless, a fascinating archaeological topic. So I want top men to continue searching the globe for it.

Timothy Furnish holds a PhD in Islamic, World and African history from Ohio State University and a MA in Theology from Concordia Seminary. He is a former U.S. Army Arabic linguist and, later, civilian consultant to U.S. Special Operations Command. He’s the author of books on the Middle East and Middle-earth, a history professor and sometime media opiner (as, for example, on Fox News Channel’s War Stories: Fighting ISIS).