The American-Born Kidnapped Children of Norway

American citizen Natalya Shutakova says her experience with the CPS of Norway has been like a personal 'Holocaust.' 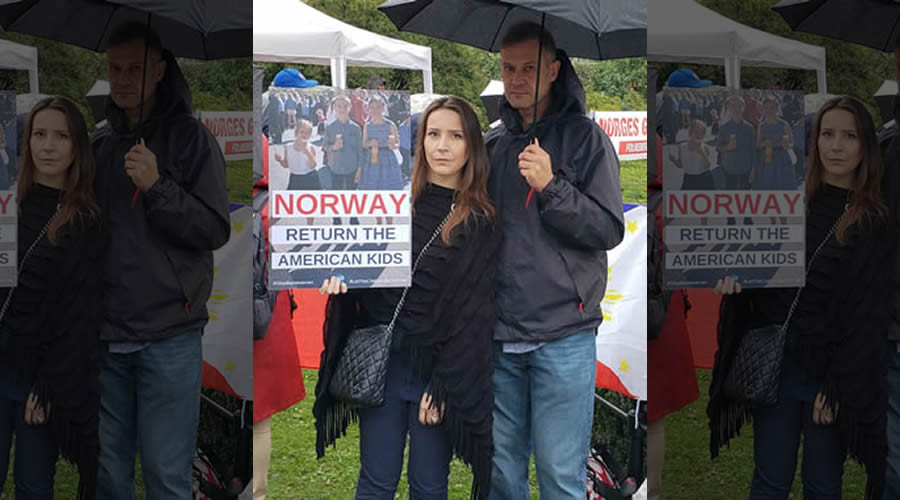 If parents don’t want to lose their children to state-sanctioned kidnapping, they shouldn’t go to Norway. American citizen Natalya Shutakova found that out the hard way.

After 20 years in the U.S., Natalya and her Lithuanian husband, Zigintas Aleksandravicius, moved to Oslo, Norway. Eight months later, on May 20, 2019, they woke in the middle of the night to a bang on the door. Three police cars and the Norwegian version of child protection services (called Barnevernet) were outside. Natalya’s three American-born children were taken from their beds. Natalya and Zigintas were arrested on charges of child mistreatment.

It happened without warning. And an iPhone started it all.

May 17 is a Norwegian holiday. It also happens to be the couple’s oldest daughter’s birthday. Brigita received an iPhone 6 for her birthday and the family enjoyed the celebrations. Over the long holiday, Brigita misbehaved and her parents took the phone away. Not surprisingly, she was very angry. On May 20, Natalya got a phone call from Brigita’s school stating that the 11 year old did not have a lunch.

Natalya went to the school. She knew she’d packed a lunch for her daughter. “She was hiding the lunch in her book bag,” said Natalya. Realizing she was caught in a lie, Brigita told a teacher her parents were going to physically punish her for lying.

That day, the Barnevernet received a complaint from the school.

Although the girl later recanted, it was too late. Following the nighttime kidnapping, the children were immediately shipped off to a foster home. Their parents were questioned by police for hours. They were finally released 24 hours later. “Welcome to Norway,” said Natalya, “where there is no justice.”

Natalya and Zigintas were prohibited from seeing their children for a month while police investigated. Police dropped all charges due to no evidence. In August, they closed the case. It didn’t matter. The case at the Barnevernet court proceeded.

On September 16, 17 and 18, the Barnevernet court held hearings. Ten witnesses for the defense testified that they had not seen or heard of any physical punishment for any of the children. They did testify that Brigita had been caught lying in the past. “We never raised a hand” to the children, Natalya said.

Ironically, the Barnevernet believed Brigita when she claimed her parents would spank her, but not when she recanted. “When she came clean, when she admitted to have lied, they would not accept that, even though she has it recorded on video.”

On the video, Brigita can be heard saying, “I am recording this video for any president. … I just made up some story and I lied. I didn’t know what I was doing. … I’m so sorry.” She concluded that, “What I mostly want, is I want my mom and dad back. … I made a big, big mistake that separated our family.”

When Natalya and Zigintas were finally able to see their children — one month after the kidnapping — it was supervised visitation once per week for two hours. During their visitation, Barnevernet workers translated and wrote notes about every word they said. It was like being “under a microscope,” said Natalya. “[Every] single word you say, they can write whatever they want.” And they did. Natalya recorded the meetings on advice from friends.

Her children were very happy to see their parents. When they the visitation was over, the children cried. “My kids would give me thousands of kisses. … We missed each other so bad. The children were very excited to see us.” But when they had to get into someone else’s car, they were upset.

“And the Barnevernet people say that ‘[the] children were traumatized to see mom and dad.’ Really? No, they were traumatized that they had to be separated over and over again. … They were like, ‘Mommy, I don’t want to go. Don’t let my hand go.'”

She adds that the Barnevernet twists the information. “I’ve never heard so many lies in my entire life.” She says she knows there will be victory, because hundreds of people are praying. “God hears every prayer. We just don’t know how God is going to do it. Who’s going to be that person who is going to do it?”

Natalya said Barnevernet have separated the children. They now live in different foster homes. She wants to tell others about Norway’s corrupt foster care system. During the initial interrogation of the children, the couple’s lawyer was prohibited from entering the room.

“How come the lawyer was never allowed to be in the interrogation? Nobody from my family’s side — only their witnesses. … I don’t think they ever let attorneys in. That’s why they win 95 percent of cases. They simply do all of this with the presence of CPS workers and some psychologists and that’s it.”

Barnevernet “will do everything in their power to keep the children in their custody. No matter if the parents never touched the child. You know? They can say, ‘Oh the child doesn’t have a proper routine, they don’t brush their teeth, they don’t wash their hands.’ That’s enough for them.”

Natalya and Zigintas are not the only parents who’ve had their children taken in a state-sanctioned kidnapping. A group of parents demonstrated in Oslo on September 7. A few hundred people protested. “We were trying to raise awareness and there [were] so many victims. They all came with the large posters of their children. … We tried to make some noise to get the attention of politicians.” Natalya and Zigintas at the demonstration in Oslo. September 7, 2019.

Amy Jacobsen, another American, lost her infant, Tyler, when he was 18 months old. “She took him to the doctor’s,” explained Natalya. “She was still breastfeeding him. He was one pound underweight than, you know, average. And that was their reason to take her son away. It’s been six years. She has not seen her baby. They have transferred him from one foster home to another, she has no idea where her child is. They have changed his legal name twice.”

Amy tried to get help from the Obama administration. She “got no help.” Not long ago, Barnevernet took away Marius and Ruth Bodnariu’s five children. The agency claimed that they children were taken away because their parents used corporal punishment. According to ADF International, that wasn’t true.

After an investigation, it was discovered that “authorities in the Bodnariu family’s community felt that the children were being ‘indoctrinated’ by their parents’ religious beliefs.” After an international outcry and multiple protests, Norway returned the children to the Bodnarius, who then fled the country. Natalya and Zigintas must now wait two months for their appeal to be heard by the appeals court. As it stands, they get supervised visitation only three days per year for two hours. If they are not successful at the appeals court, it will be another year before they can appeal to the next higher court.

Finally, they would need to appeal to the highest court — the European Court of Human Rights. The outcome is not guaranteed, even if that court rules in their favor.

Natalya related the story of a woman who appealed to the European Court of Human Rights after her child was taken away. Norway lost the case and was ordered to return the child immediately. “They still would not comply with the judgment,” says Natalya. “Norway said, ‘We’ll only compensate her $25,000 euros and that’s it.'” Those who took the child should be punished and held responsible, Natalya added. Natalya and her family asks for prayer that her children’s minds will be protected, as psychologists are working with them regularly. “They are telling kids, ‘Hey, your mom and dad, they’re angry. They don’t want to see you anymore,’ but in fact, here we are, praying and begging God to be reunited. I just pray that my children’s minds and their hearts will not be affected.”

“I’m hoping and praying that God will send the right person with [a] kind heart … with the right set of mind and heart. This person will be able to intervene.” She believes that President Trump could help bring her American children home. “My hope now is that, knowing that President Trump is very passionate about children, I think he’s able to help. I hope so. So, that’s my prayer.”