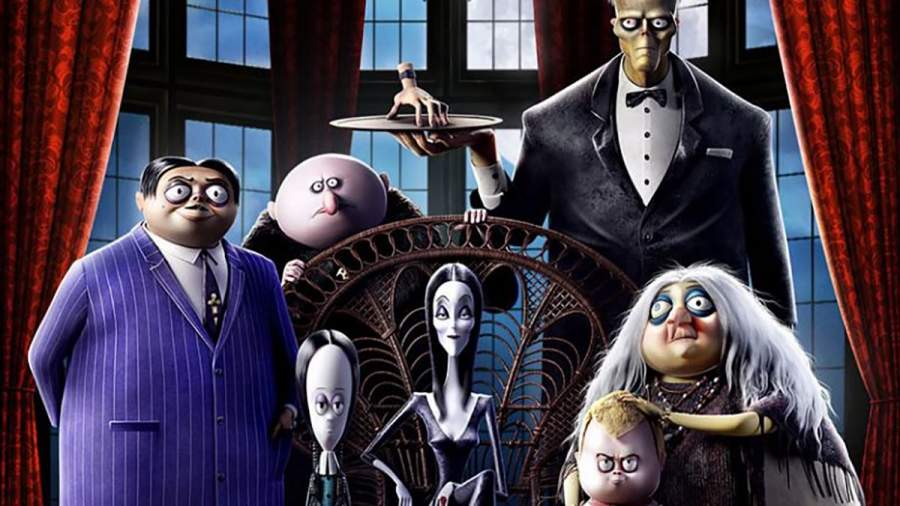 If we’ve ever needed the Addams Family, we need them now. Before I lay out why, I must unpack some personal baggage. Morticia, played on TV by Carolyn Jones, forever formed my taste in women. She imprinted on me, as if I were a baby bird or something. So ever since then, I’ve followed around women with jet black hair and paper white skin, with my hungry, open beak. And Gomez seems to have served as my silent role model over the decades — something I realized years ago in a rare fit of introspection.

So perhaps it’s a little risky to let your kids watch too many hours of the Addamses, as I did in countless bouts before the TV while mom was off at the church. You know, playing high-stakes poker.

For a Yuletide family movie, I suggest instead the classic musical The Nightmare Before Christmas. In my capacity as arts editor at Faith and Family magazine some years back, I recommended that movie to countless parents. Those who heeded my advice were very … vocal in their feedback. There was regular … feedback about my holiday suggestions, such as solving the Halloween dilemma by dressing your girls as martyrs and your boys as the lions who ate them, that I had to write the Bad Catholic’s series to use all the ideas which my bosses started rejecting without explanation.

The Movie Has Met the Moment

I’m glad all that’s out in the open. But with the Halloween release of the new Addams Family animation, the movie has met the moment. The characters inspired by Charles Addams’s wry New Yorker cartoons of the 1940s offer us valuable perspective in times like ours. Which is to say, times that are exhaustively grotesque. If reading the news each day leaves you feeling as if you’ve dropped into a live Hieronymous Bosch painting, you might as well learn to laugh about it.

The pope presiding over a pagan rite involving a cannibals’ canoe and fertility fetishes at the Vatican with lesbian Episcopalian “priests” in t-shirts? Join Uncle Fester by sticking a 100 watt bulb in your mouth. Shed some light on the situation!

Post-Christian bishops who live on millions from German taxpayers, George Soros, and the pro-abortion Ford Foundation meeting in Rome’s Catacombs to prattle about poverty? Unwind by dicing up chunks of zebra for Morticia’s man-eating house plant, Cleopatra.

The president pulling our troops out of one part of Syria, then bringing them “home” to Saudi Arabia? Trump deciding that our allies, the Kurds, are really terrorists and the Turks are really our allies? Our Special Forces ordered to flee their bases like Brits headed for Dunkirk? I suggest helping Pugsley aim his domestic rocket collection. Pretend that you’re shooting them at Ankara.

Or maybe you’re stunned by the spectacle of our foreign policy elites, and their reaction to Trump’s decision. Here the president hands a part of Northeastern Syria to Turkey’s favorite terrorists, the Free Syrian Army. (You might know them better by their old name, al Qaeda. We New Yorkers have a very special, long-standing connection with that organization.)

Set up your model trains as Gomez used to do, on the TV show. For verisimilitude, buy two Acelas. Name one “Liberal Internationalists” and the other “Neconservatives.” Then rev them up to top speed, crash them together, and blow them up.

You’d think that the Obama team and the neocons would be happy. For ten years, both wings of the War Party used U.S. money (and wanted to use our air force) to put that faction in charge of all of Syria. Remember John McCain’s “moderate rebels”? Same guys.

But what happens when Donald Trump gives these moderate-rebel-freedom-fighter-jihadist-terrorists just a tiny part of Syria? The whole D.C. establishment explodes. Suddenly Syrian Christians are important. All at once, we’re supposed to be worried that our cynical foreign policy stunts might cause a genocide.

Crash Some Acelas Together

And they might. I’ve spent the last three years writing pieces at The Stream and working behind the scenes trying to prevent this. But the horrors we’re seeing now? They’re on nothing like the scale of the genocide previous presidents yawned and shrugged at when Iraqi Christians endured it. A million Christians won’t have to flee the region they’ve inhabited for 2000 years. Which was the outcome Lindsey Graham, Marco Rubio, and Mitt Romney tried to unleash, by handing Syria to al Qaeda.

But now these same folks accuse Donald Trump of being callous. The Obamadites and the Bushies unite in concern for religious freedom. Why? Because the man in charge has a down-market Queens accent, and his faction took over the Xerox machines. With their grubby deplorable hands. They’re leaving greasy fingerprints from Chick-Fil-A all over the shiny iPads.

The only rational response to all of this? Set up your model trains as Gomez used to do, on the TV show. For verisimilitude, buy two Acelas. Name one “Liberal Internationalists” and the other “Neconservatives.” Then rev them up to top speed, crash them together, and blow them up. Trust me, you’ll feel much better.

Hillary, Tulsi, and the Guillotine

Or maybe you’ve been listening as Hillary Clinton squawks crackpot charges at Tulsi Gabbard. Taking half a million dollars for your family foundation for your husband’s speech then selling Russia a big chunk of uranium? That’s just acting as a savvy patriot. Bombing Libya until half the country falls to ISIS and the African slave trade returns? That’s just being responsible, and fighting for human rights. Blaming a planned al Qaeda attack on a U.S. embassy on some hapless Coptic guy’s Youtube video? That’s just smart politics.

But urging the U.S. not to go to war to put al Qaeda in charge of a million Syrian Christians? That makes you a “Russian asset.”

Think about Hillary for more than just a few minutes, and you’ll need to join Wednesday at the guillotine, as she beheads the rest of her doll collection.

So by all means see the movie. It’s funny, charming, and smart. But if you bring the kids, warn them that the scene with Ouija boards in the graveyard is nothing they ought to emulate. Tell them to leave that kind of “inculturation” to the specialists at the Vatican.