Pope John Paul II died on this date ten years ago. I had the honor of working as a Swiss Guard at the Vatican during his pontificate, and was deeply shaped by both the man and his teaching. I am convinced that he will be celebrated as Saint John Paul the Great in centuries to come. Those above the age of forty witnessed his achievements during his almost three decades as the shepherd of Catholicism: He helped bring down the communist divide of Europe. He successfully implemented the reforms of Vatican II. He changed the image of the papacy, becoming one of the most widely admired persons of the twenty-first century.

However, it was the “santo subito” signs at his funeral that indicated the most profound effect John Paul II will leave for the Church: The JPII Generation.

Catholics born between 1960-something and 2000 can be counted as the JPII generation: Youth who did not consciously know any other pope than John Paul II. Their faith matured during his pontificate and, more importantly, they learned the faith from him.

They are the “be not afraid” generation. The youngsters who were encouraged not to “settle for mediocrity” and instead “put out out into the deep.” They grew up under the influence of the new evangelization, the world youth days, the resurgence of Eucharistic adoration, the Rosary and vocations.

You can tell them apart from many Catholics who came of age in the decade or two before: The JPII Generation are Christians who love the Church and her Tradition. They boldly embrace the Magisterium while being fully involved in the secular world. They are practitioners of the theology of the body.

The oldest of that generation are in their fifties now. They are not in the top leading positions of society and the Church . . . yet. This will change during the next 20 years and it represents one of the most profound shifts in leadership in recent history.

Pope Leo XIII (who served as pope from 1878 to 1903) had built such a generation and it had profound impact on the course of the Church — but that generation pales in comparison to this newer generation. Pope Leo was a wonderful pope whose work marks the beginning of Catholic Social Teaching. He laid the foundation for many of the key impulses that helped the Church enter into the twentieth century. He started on the path of answering the questions and challenges raised by the Protestant reformation and the industrial and scientific revolutions.

It was Pope John Paul II who, a century later, offered profound answers to these questions through his teachings. His writings on faith and reason, the social meaning of Christian life, the meanings of human work, and most importantly the theology of the body are the bookend of a period of theological, philosophical and existential uncertainty. John Paul II closed a chapter of history and gave impulse to the Church and humanity well into the next one. If we are not aware of it, it is simply because we are so close to the actual events.

Within the next 30 years, Church leadership will profoundly change, for both ordained and lay. This change will be Saint John Paul’s greatest legacy. It will be the first blossoms of the New Evangelization that he started. The fact that this generation will last for 40 years means that John Paul’s personal impact will be felt well into the twenty-second century. 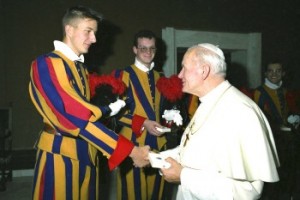 Saint John Paul II’s theological opus will one day be regarded like Augustine and Thomas in that he taught an entire era how to interpret and make relevant the Gospel of Jesus Christ. I predict that it will be seen as a gift not only to Catholics but to all Christians, as Augustine’s writings have been.

Such persons come along but very rarely and if you’ve ever actually seen one in person, count yourself very blessed indeed. If you did not have that privilege while John Paul II was here on earth, go meet him in the many books and writings he left us and use him as a guide to enrich your prayer life.

“Be not afraid,” he’d want to tell you. “Put out into the deep” and you too will become a part of the Pope Saint John Paul II Generation.

Andreas Widmer is Director of Entrepreneurship Programs at The Catholic University of America and author of The Pope & The CEO. He suggests that to get a taste of John Paul II’s writing, you might want to start with his 1998 encyclical Fides et Ratio, then read a review of The Theology of the Body and contemplate his 1991 encyclical Centesimus Annus  to round it out.