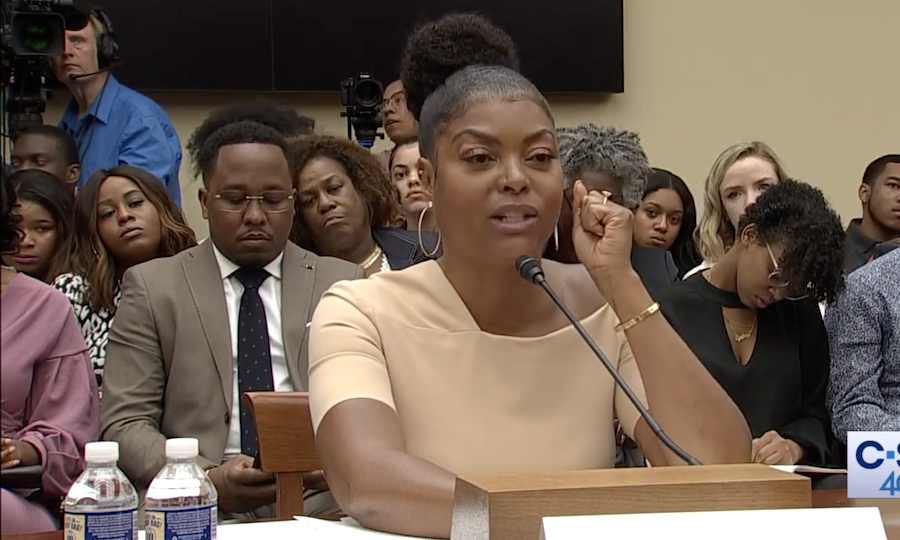 Responding to the rise of suicide among American youth, a Congressional hearing on Friday featured a star witness. Golden Globe winner and former teacher Taraji P. Henson spoke up on this growing trending claiming thousands of lives.

“I really don’t know how to fix this problem,” said Henson in a taskforce hearing of the Congressional Black Caucus. “I just know that the suicide rate is rising.

“The ages of the children committing suicide are getting younger and younger. It breaks my heart that five-year-old children are contemplating life and death.”

According to the CDC, suicide ranks as the second leading cause of death among youth and adolescents. Henson specified where her research has found causal factors for these trends.

“It’s the damage of social media,” she said. “We have to turn this boat around or we’re going to lose humanity — and it starts with the kids. We need to focus on our children now.”

Other youth advocates have reached similar conclusions. Released on Netflix in March, the documentary Social Animals features several teens who use top social platform Instagram for positive and negative purposes.

“The human condition has not changed,” says film director Jonathan Ignatius Green. “But there is a new digital landscape in our pockets. The thing that has changed is the speed. It’s striking how many interactions kids are having per day on Instagram. That’s what’s new about social media.”

In the film, one teen girl shares candidly why she attempted suicide after being bullied online.

“I don’t think a lot of people know I tried taking my life,” says Emma Crockett in an interview. “But I shared it in the film because I want people to know how serious words can be — and actions through social media.”

Getting Honest About Suicide, Faith and Race

The actress, who grew up in Washington, D.C., previously served as a teacher. She recently formed the Boris Lawrence Henson Foundation, named after her late father. The nonprofit focuses on mental health, suicide prevention and reducing prison recidivism.

Henson spoke honestly from own mental health journey. “I also suffer from depression and anxiety,” she said. “If you’re a human living in today’s world, I don’t know how you’re not.”

An outspoken Christian, Henson was recently interviewed about how her faith relates to her acting. “I’m very spiritual in life,” she said. “I don’t do anything without talking to God first. That’s just who I am, and it’s in all my work.”

Analysis from scholars at The Heritage Foundation shows faith can be a bulwark against the hopelessness and despair associated with suicide. Yet Henson called out aspects of church culture that can be counterproductive.

Dealing With the Issues

“We’ve been taught to pray our problems away,” she said, rather than seek professional help.

Her testimony noted particular challenges people of color face. According to analysis from the foundation, few counselors exist with cultural competency to address the unique needs of minority families.

“In the African-American community, we don’t deal with mental health issues,” said Henson. “We don’t even talk about it. We’ve been demonized for coming out saying we have issues.”

She circled back to her central concern. A lack of proficient counselors contributes to particularly young men taking their own lives. Currently, the suicide rate is four times higher among males than females.

“We can’t give up on our kids,” added Henson, mother to a young adult son. “The more we talk about [mental health], the more people will feel like they can talk about it.”

The team behind Social Animals hope to spark honest discussion on how social media affects people today. Daughter of a youth pastor in rural Ohio, Emma Crockett speaks openly of what took her down a dark path.

“I let people I followed on social media have too much impact on my life and what I thought about myself,” says Crockett. “Girls direct-messaged mean things, then there’s also FOMO — the fear of missing out. It all hit me pretty hard.”

Produced over three years, the film is the brainchild of a creative executive at Los Angeles-based Conscious Minds. As the ad firm for Nike, Uber, Coca-Cola and other leading companies, their film comes to life with impressive, stunning visuals.

“From the first time I spoke with Emma, I was struck by how reflective and articulate she was,” says director Green. “Having gone through so much, she was willing to share with us. She saw the benefit telling her story could have for other teens.”

Crockett attended a private Christian school at the time. The environment was not immune to image-driven online culture.

“Women especially, we’re always comparing ourselves to these supermodels online,” she says. “Beauty is a huge industry — people getting lip fillers, makeup galore and even surgeries done to keep up with ‘what’s in.’ Social media has such an impact because they can advertise with it as much as they want.”

Hours before her suicide attempt, harassing private messages on Instagram from classmates took her over the edge. Later, in her recovery process, Crockett found new purpose.

“I saw other kids going through a hard time at the facility I was in,” she recalls. “It made me realize that my life has value. Instead of selfishly continuing a pity party for myself, I wanted to help them. Helping people actually helped me.”

Mastering Social Media Before It Masters Us

“We need each other,” said Henson at Friday’s hearing. “This is me reaching across the table and trying to lend a helping hand.”

She is driven to address the complex troubles her son faces in today’s culture. It’s similar to a Los Angeles father who spent years creating a documentary.

“When I started making this film, my son was about to turn 13,” says Green. “Part of the motivation to dig into this was to figure it out for myself and my family. We ended up with a film that causes people of all ages to reflect on their own social media use.”

Many leaders have created resources for parents to grapple with these new issues. The film’s surprisingly honest lead subject offers what she hopes people gain from watching Social Animals.

“Things do get better,” says Crockett. “I hope the film moves people enough to say, OK, I can let go of these toxic people; this isn’t my life. Eventually, you will stop caring so much about social media and be able to enjoy life more.”

Noting that every family is different, the director refrains from advocating specific boundaries to set with social media. Yet he does offer one piece of advice.

“The first thing a parent can do is model it,” says Green. “Do you have your iPhone at the dinner table? Do you look at it during conversations or do you make eye contact? Those kind of modeling things mean more than any rules that we set with our kids.”

If you are thinking of hurting yourself, or if you are concerned that someone else may be suicidal, call the National Suicide Prevention Lifeline at 1-800-273-TALK (8255).

Josh M. Shepherd covers culture, faith, and public policy issues as a Contributor to The Stream. He has served on staff at Focus on the Family, The Heritage Foundation, Bound4LIFE International, and two Congressional offices. His articles have appeared in media outlets including Christianity Today, The Daily Signal, The Federalist, Boundless, Religion & Politics and Christian Headlines. A graduate of the University of Colorado, Josh and his wife live in the Washington, D.C. area with their son.