On April 4, 1965, Air Force pilot “Smitty” Harris was gunned down in north Vietnam. In Tap Code, he and his wife chronicle how providential events — at home and abroad — kept him alive. 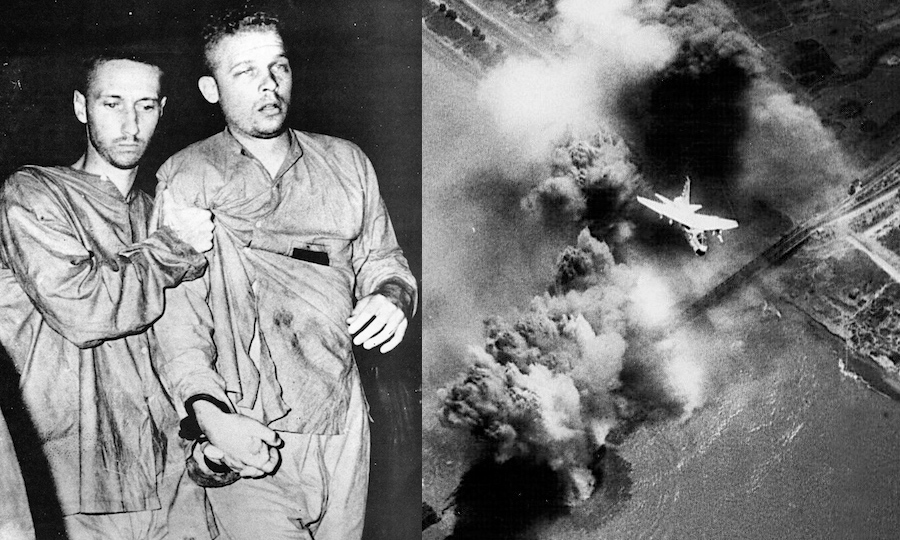 During the Vietnam War, American prisoners of war held at the “Hanoi Hilton” including pilot Smitty Harris (left) and Bob Shumaker were forced to march. Harris was part of the first 1965 bombing raid on Thanh Hóa Bridge in north Vietnam, seen here during a later 1972 mission.

“Which aircraft carrier were you on? What was your squadron and type of aircraft?”

The Vietnamese man spoke with authority in halting English, as three armed guards stood watch over their bound prisoner. Hours earlier, his plane had been hit by anti-aircraft fire.

“Truth is, I was Air Force and flew out of a hard runway in Thailand,” said Carlyle Smith “Smitty” Harris, today age 91, in a phone interview. “But I gave him only name, rank, service number, and date of birth, which are required by our code of conduct.”

His interrogator grew angry. Noticing the pilot’s wedding band, he motioned to the guards in Vietnamese. “They threw me down and were able to get my wedding ring off,” said Harris. “Of course, that was the arm with my broken shoulder. I tried to resist to the best of my ability, but I couldn’t.”

Harris had no idea that initial interrogation would be his first of hundreds. Captured as a prisoner of war (POW), the young pilot would be held in north Vietnam for over seven years and ten months.

He tells all in Tap Code: The Epic Survival Tale of a Vietnam POW and the Secret Code that Changed Everything, a memoir co-written with his wife Louise.

Years prior, a question he asked a training school instructor led to Harris learning a World War II-era secret code — one simpler than Morse. Thanks to Harris, it enabled hundreds of POWs to communicate covertly. It steeled their resolve as challenges mounted.

“Eventually they started real tough torture,” recalled Harris. “After days of intense pain, with our arms pulled up and heads almost between our knees, some men had their arms dislocated by the guards.

“At that time, our prayers helped us endure and know that we were not totally alone.”

In 1965, President Lyndon B. Johnson sought to escalate U.S. involvement in the ongoing war between north and south Vietnam. He authorized Operation Rolling Thunder, a years-long campaign of aerial bombardment on the communist north Vietnam regime. Harris piloted one of over 30 aircraft involved in the first and largest aerial raid, to take out Thanh Hóa Bridge in north Vietnam. His F-105D Thunderchief fighter jet carried eight 750-lb. bombs.

“I happened to be the first airplane to roll in on the target, on a dive bomb run,” said Harris. “I had lots of switches to get right for air speed and release altitude. I was very, very dizzy. But I was aware that there was a lot of flack coming up at me.”

The raid had been spotted on radar. His opponents “got lucky,” says Harris — whose plane was hit and he quickly ejected.

“Soon I was hanging under a big white sheet as my parachute billowed above me,” said Harris. “I looked around for a place to try to guide the chute and maybe evade capture. To my dismay, I was directly over a large Vietnamese village.”

Providing nothing to interrogators, he was sent to Hỏa Lò Prison — known to hundreds of POWs as the “Hanoi Hilton.” Several American war heroes endured unspeakable torture at this prison facility, notably future Senator John McCain.

Back home, his pregnant wife waited — unsure of her husband’s fate.

When leaving on his mission, Harris embraced three family members: his wife and two daughters. They were stationed on an Air Force base in Okinawa, Japan to be near their active-duty father. Imprisoned over 1,400 miles away, he missed his family’s new arrival.

“Smitty had never met our son, because he was born in May after Smitty’s mission in April,” said his wife, Louise.

Soon she got word from the Pentagon that her husband’s mission had failed. “They said they knew his plane had gone down and no one had seen a parachute,” she said. “I told them very positively: I know in my heart that he is alive. They could not have convinced me otherwise.”

The young family soon moved back to Tupelo, Mississippi where relatives resided. “We talked every day as if Daddy would walk through that door any day,” she said. “We laughed about the things he liked to laugh about. We made him a part of our daily lives.”

Her Christian faith provided the assurance they needed. “We went to church and prayed there with our community,” said Louise. “Then we prayed for him every night on our knees.”

The mother of three, rather than the Pentagon, received the first tangible evidence of his survival. In 1965, North Vietnamese officials sought to convince other nations their side was in the right. As propaganda, they produced letters from POWs to show diplomats that prisoners could write home.

“One of those diplomats, a British lady, pinched one of those letters and later mailed it,” said Louise Harris. “The postmaster in Tupelo called me on day and said, ‘Mrs. Harris, I think I have a letter from your husband.’ I immediately raced to the post office. Sure enough, it was Smitty’s handwriting.”

Months later, Harris was finally taken out of solitary confinement.

Placed in a small concrete cell, he found four other grinning POWs — all grateful for the respite. He quickly taught them the tap code they could use to communicate. Within days, they were back in separate cells.

“The guards were aware of any voice communication and put a stop to that,” said Harris. “Imprisoned again in that block of dark cells, behind a heavy door, the tap code came in handy.”

North Vietnamese forces had a divide and conquer strategy with the POWs, trying to learn from any differences in their responses. Torture escalated to where the men had to respond with something.

During the days in their cells, the tap code enabled a senior officer to coordinate their responses. Yet it also allowed for joint communication on a higher level.

“Most of us were used to going to church on a Sunday,” said Harris. “On Sunday mornings, the senior officer would thump his wall with his elbow. He made a loud enough sound we could all hear. If we were able, we would get down on our knees.”

According to the pilot, their corporate service included the Lord’s Prayer followed by the Pledge of Allegiance and then any silent prayers.

“Though it was silent to the guards, all of us in unison said prayers to our Lord,” he added. “It gave us a real feeling of safety and knowing that someone else was with us — a Higher Being that we could talk to and get help from.” Smitty and Louise Harris pictured with their three adult children. “The war went on and on because politicians didn’t let the military do what it could do,” said Harris. “We can accomplish objectives if allowed to carry them out with our planning and full capabilities. The Vietnam War could’ve ended in 1965, and it went on for eight more years.”

Anti-war protests across the U.S. often took out anger on returning service members. “While Smitty was gone, the men who came home from Vietnam were treated horribly,” said Louise Harris. “That was a disgrace to our country. Years later, our fellas came home as rescued POWs to a grateful nation — relieved that the war was over.”

For about half of returning POWs, their marriages failed according to the couple.

“But many of us felt stronger and relieved to come home to a loving family and loving country,” said Smitty Harris. “We believed God was looking down on favor upon us, and we remembered our marriage vows. We picked up where we left off.”

The Harrises remain happily rooted in Mississippi, parents of three adult children and a multiplying number of grandchildren. As the nation marks Veterans Day, they urge Americans to engage in prayer and patriotism as the first steps to solving current national issues.

“We are in a terrible mess right now, and we need to get back to the basics,” said Louise. “We’ve got to find unity in where we started: a belief in God and country.”

Co-authored by Smitty and Louise Harris, Tap Code is available now where books are sold.