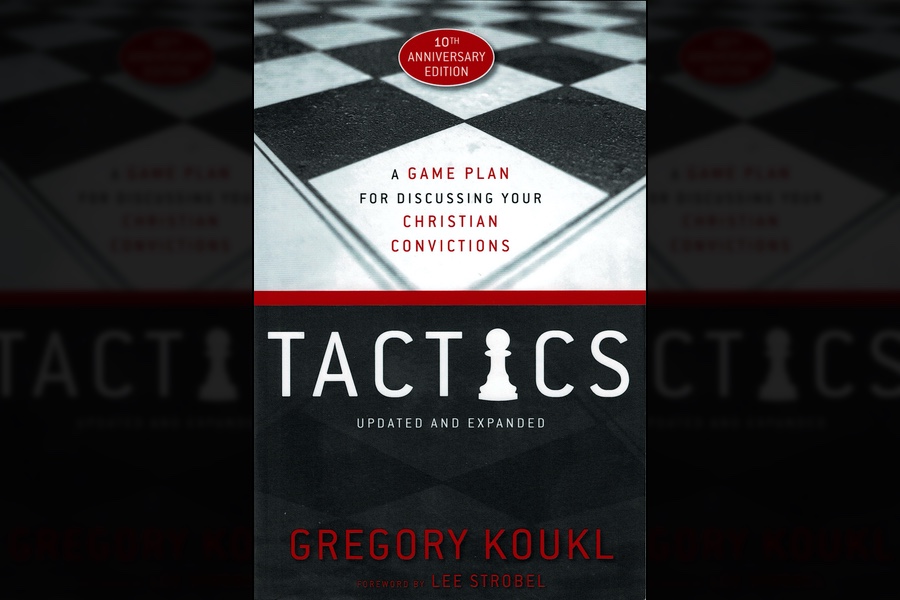 You’re a believer in Christ, and you want to help others know about Him, too. Or at least you know that’s what Christ-followers should do. There’s kind of a guilty feeling attached to it, since you think you ought to be “sharing your faith” more. But it’s hard getting started, isn’t it? Worse yet, it’s controversial. You’re not sure everyone wants to talk about faith, and you’re even pretty sure some people disagree strongly.

What if there were an answer to this? Wouldn’t you like 2020 to be the year you could finally open up about your faith, and do it winsomely and well?

Then you’ll definitely want to read Gregory Koukl’s newly revised Tactics: A Game Plan for Discussing Your Christian Convictions. It’ll make all the difference in your life as an ambassador for Christ, making 2020 a whole new kind of year for you.

Koukl is an author and speaker, the president of Stand to Reason, whose website is one of my top three go-to places for answers to tough questions about Bible, faith, culture, and ethics. For decades now he has hosted one of the most engaging call-in talk shows on the web, a podcast also called Stand to Reason.

Week after week, he demonstrates what he calls his “Ambassador Model.” As he says, the approach “trades more on friendly curiosity — a kind of relaxed diplomacy — than on confrontation.” It’s a model that fits our day. “Even though there is real warfare going on, I think our engagement should look more like diplomacy than D-Day.”

Amen to that. But how do we push through the barriers? Part of the answer lies in taking some of the pressure off. Borrowing another biblical metaphor (from 1 Cor. 4:5-8), Koukl speaks of planting, watering, and harvesting. For many of us the awkwardness — the pressure — come from thinking that if we haven’t pushed through to the harvest, or at least the call for a decision, we haven’t done the work of sharing the faith. But this is both unbiblical and unwise. “Before there can be any harvest,” Koukl says most sensibly, “there always has to be a season of gardening.”

And gardening, to him, means doing small things that will help influence people toward belief. Actions certainly count. So do words, though, which brings us back to the question, How do I talk about my faith without that awful awkwardness? For Christ’s commission is clear: He still calls us to be His ambassadors, and ambassadors carry messages.

It starts with a solid and living relationship with Him. Beyond that, Koukl explains, there are three skills that any ambassador needs: knowledge, character, and tactical wisdom. It’s in tactics that Koukl’s teaching excels far beyond any other I know.

Tactics are the nitty-gritty, what-do-I-say-now sorts of skills. It’s knowing what to say when someone tells you, “Jesus was just a legend,” or, “The unborn aren’t really persons,” or, “Faith is ridiculous in an age of science.”

You could follow the social media model and tell the other person he’s wrong and probably stupid, too. That’s (need I say it?) not being much of an ambassador: It doesn’t represent the character of Christ. Or you could sit through it in silence. But that’s not acting as an ambassador, either; you’re failing to deliver even a hint of the life-giving answer.

Or you could ask one or two key questions that can open the door to a truly positive conversation. Surprisingly, Koukl has two of them that work in just about any circumstance: “What do you mean by that?” and, “How did you come to that conclusion?” There are other ways to ask those questions, naturally, but one way or another, you’d be surprised how universally those two questions can work.

Then you could listen. That accomplishes two things: It demonstrates the love of Christ, and it tells you more of what really needs answering. “The tactical approach,” says Koukl, “requires as much careful listening as thoughtful response.”

And then you’re ready to speak — though even that might very well involve more question-asking. Questions are great, says Koukl: They actually help you stay in control of the conversation.

He rolls out yet another metaphor for this, calling it the “Columbo Tactic,” after the frumpy TV movie detective from a few decades ago, played by Peter Falk. Columbo kept saying, “Oh, and one more question,” until the guilty party got caught in his own answers.

The goal in our witnessing isn’t to entrap, of course. It’s to give life, or as Koukl says, it’s “to find clever ways to exploit someone’s bad thinking for the purpose of guiding her to truth, remaining gracious and charitable at the same time. My aim is to manage, not manipulate; to convince, not coerce; to finesse, not fight.”

A Shortcut Where There’s No Shortcut

That’s a large part of the Ambassador Model already. Once you’ve connected through asking and listening, though, those moments will come when you need to answer and explain. There’s really no shortcut from this point forward: We have to equip ourselves with the knowledge every Christian needs to be able “give a reason for the hope within us” (1 Peter 3:15).

That is, there’s no shortcut there; but if there were, it’d be in the methods and tactics Koukl gives for identifying the weak points in atheistic or secular thinking. Here, too, he’s quick with the figure of speech. One method, for example, he calls “taking the roof off,” or taking a “test drive.”

First, adopt the other person’s viewpoint for the sake of discussion. Next, give his idea a test drive. Try to determine where you’ll end up if you follow his instructions [or his map] faithfully. If you arrive at an odd destination, point it out and invite the person to reconsider the worldview route he has been taking.

Sensible enough? This is the kind of thing Koukl excels at. You can, too. It’ll take some study and some practice. Knowing the right tactics, though, is the place to begin. That’s why I strongly recommend you start 2020 with Gregory Koukl’s Tactics: A Game Plan for Discussing Your Christian Convictions.

Alex Trebek Gets His Ultimate Question Right — But Then What?