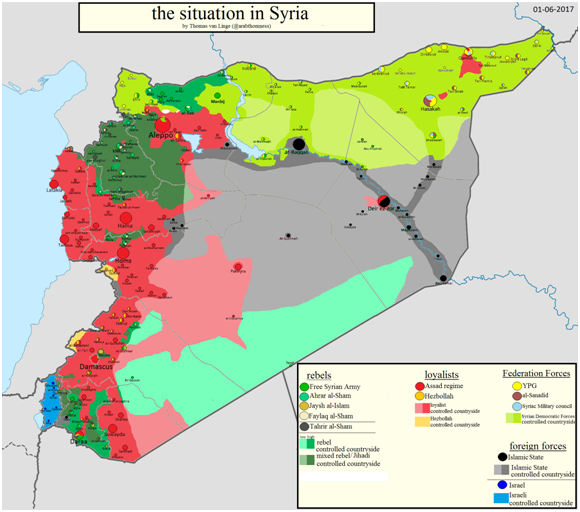 Today I received a call which I’ve dreaded. The battle for Raqqa has started. Starting today, thousands of brave fighters of the Syrian Democratic Forces (SDF) will fight from house to house against ISIS: an entrenched enemy that will give away absolutely nothing. Some of my dear friends will be dodging bullets and dismantling IEDs. I can only pray that they make it out alive.

This is an immensely important moment in the war against ISIS. After three years of endless fighting the SDF is about to take the capital of the “Caliphate.” There is no doubt about the final outcome: ISIS will be defeated. For the democratic, pluralist Federation of Northern Syria this is a highly symbolic moment. ISIS made the Federation its prime target. Nobody back in 2014 could have believed that the Federation would crush ISIS, instead of the other way around. That religious liberty and equality for women would triumph over savagery. That the brave people of Syria would free themselves. But they did. Shouldn’t that give us hope?

The upcoming victory only became possible thanks to a remarkable and unique cooperation of Kurds, Arabs and Syrian Christians. They created the most unusual alliance in the modern Middle East.

This alliance is unique because it is not a simple ‘anti-ISIS’ coalition of convenience. No, in a region where Syrian government authority had vanished, people targeted by ISIS came together. In these extraordinary circumstances these groups created their own government, starting with local and regional councils. They ensured that men and women had equal representation at all levels. They introduced the same freedom of religion as we enjoy in the West — which is rare in the Middle East. Federation residents can choose their own religion, change it, or hold to none at all. They can practice or preach it freely. These Syrian freedom fighters started out with three small regions and very few weapons. Nobody would have believed back then that this movement would grow into the force that would conquer ISIS: A self-starter army with home-made “tanks” and little or no help from the outside world. But they resisted ISIS in Kobane and in the Khabour Valley against all odds — and won. And now they’re moving into Raqqa to finish off ISIS in its capital. It’s perhaps the most stirring story of self-sacrifice and heroism in our times.

President Trump made the bold move to arm the Kurds in the SDF, reversing the Obama administration policy of dribbling out meager aid, and only to Arab groups. Sadly, the U.S. is still honoring Obama’s decision not to arm the Christians — though they’re a full part of the SDF, and have bravely fought ISIS for years. American Christians should let the White House and Congress know that this policy is unjust and foolish. It leaves Christians uniquely vulnerable and dependent. It tells the rest of the region (where Turkey and Saudi Arabia back Sunni Islamists) that Syrian Christians are friendless and forgotten.

To answer this question we need to take a look at a very recent ‘political’ map of Syria. (It’s the main image for this column.) It shows the territory held by every single faction in Syria.

It is pretty obvious that the Assad regime and allies are strongest in the richly populated west of Syria. However their armies are exhausted due to a long, protracted war. All the areas controlled by ‘rebel forces’ are scattered across the west and south of Syria, and small by comparison. Only the rebel areas in the far south (Daraa) and north (Idlib) can receive supplies from the outside. All other rebel enclaves are pockets in regime territory.

A bit of an oddity is the southern desert, which is very sparsely populated. For some time it has been in the hands of U.S.-supported Syrian opposition forces, which have fought against ISIS and also clashed with Assad’s troops. This force is playing an increasingly important role in blocking Iranian influence.

In the desert center of Syria we see ISIS. Also it’s in the east along the Euphrates towards Iraq. However it is clear that they lost a lot of territory to the Federation and a bit to Assad’s regime.

The Federation has expanded its area almost solely at the expense of ISIS. The Federation now is the major force in all of North-East Syria and a large part of the northwest.

The Next Step in Ending ISIS

What will happen after Raqqa? The SDF have made clear that the Deir-Ezzor area east of the Euphrates is the next goal. Only after they liberate that region can we say that ISIS has been defeated in Syria. For the SDF this will be very important, as it will ensure that they will have a very significant role in post-ISIS Syria. Furthermore it will open all supply routes between the Federation and Iraq. Finally it will ensure that Iran will not be able to move freely forces from Teheran to Damascus. This prospect would otherwise become reality: Iranian proxies in Iraq have just reached the Iraqi-Syrian border. When SDF has expanded the Federation to all of eastern Syria, there will be calm and stability in eastern and northern Syria but a protracted civil war in the west.

The West Can’t End the War

It is highly unlikely that there will be a final solution for the civil war in western Syria any time soon. At this moment there is no sign of any peace deal. The Astana and U.N. Geneva talks have unsurprisingly been mostly window-dressing. The jihadist forces in the north and the rebel forces in the south show no signs of giving up. The Assad regime forces are exhausted and have been bleeding for years now with no end in sight. The victories of Assad in Aleppo and some areas around Damascus are small in comparison to the whole territory that is still in hands of anti-regime forces.

There is a steady movement to a step by step federalization of Syria. And as The Stream has written, that would be the best possible outcome. In western Syria, the highly heterogenous population groups are gradually being homogenized — as anti-Assad people flee his regions, and his supporters flock to them. It’s sad that this is happening thanks to military pressure. In the Federation of Northern Syria, there has been no ethnic cleansing or group removals. It is still a complex mosaic, but one that functions well, with power decentralized and the rights of minorities protected.

The U.S. and the E.U. Can Help Build Peace

What can the U.S. and the E.U. do about Syria? Let’s start with what they can’t do. They cannot change the situation in the western part of the country. That’s because:

Based on these realities the E.U. and the U.S. should focus on cooperation with the Federation of Northern Syria. It should help rebuild (where needed) war-torn towns and facilities. This will bring stability to a very significant part of Syria. Moreover the new culture of freedom that the Federation offers will exert a magnetic attraction. People in neighboring regions will want that for themselves, too. This is how freedom usually grows — organically, from the ground up. That’s how it emerged in the U.S., and in England and Switzerland before it.

And it’s happening now in the Federation. Arab women from strict Muslim towns like Shaddadi are now joining the Federation’s police forces. An increasing number of Kurds are converting to Christianity — as they are free to do in the Federation (or vice versa). Muslims who do the same in Saudi Arabia and many other Muslim countries face the death penalty. My heart breaks when I think of all the (mostly) young people who will die in liberating Raqqa. But they need not die in vain. The West has the chance to help the Syrian people nurture the seeds of freedom. If it grows, it will change the Middle East. That will change the world.