With religious liberty cases already on their docket, on Friday the Supreme Court accepted an abortion-related case. Once again, these issues will be elevated during election season. 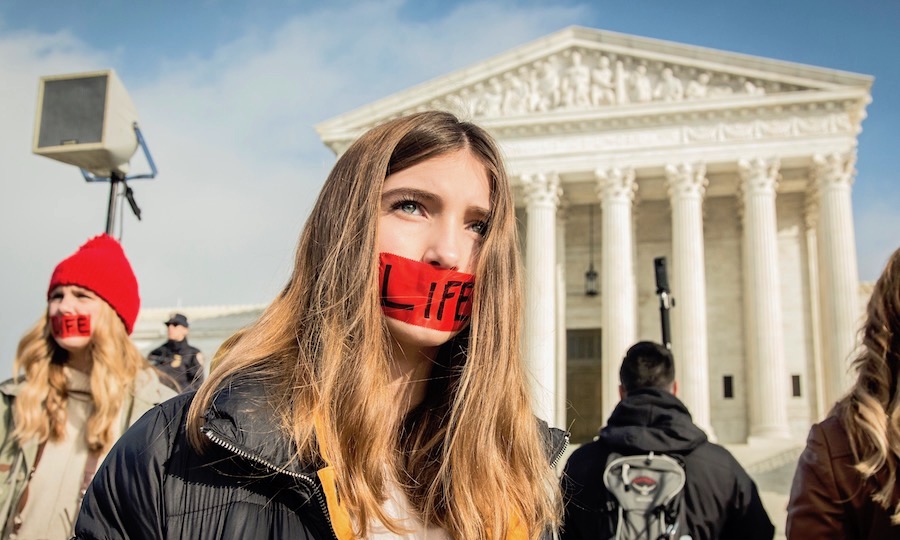 Several women and men stand outside the U.S. Supreme Court in prayer on January 18, 2019 during the 46th annual March for Life. They prayed silently, wearing red tape over their mouths handwritten with the word “life.”

It sets up abortion policies as a major electoral issue. On Friday, the U.S. Supreme Court agreed to hear the legal challenge to a Louisiana pro-life law. In June Medical Services v. Gee, a Louisiana abortion facility has challenged a state law requiring abortion providers to have admitting privileges at a nearby hospital.

The Court of Appeals upheld the law. The high court’s decision on the case will likely come in June, just before both party conventions.

“In 2020, I believe the fate of America hinges upon the issue of life.” — Melinda Thybault

“In light of all that is at stake in 2020, I believe now the fate of America hinges upon the issue of life,” said Melinda Thybault, founder of The Moral Outcry.

On Tuesday, the faith-based group delivered a citizens’ petition of more than 250,000 names to the high court. The group rallied to advocate and pray for this Louisiana case to be taken up. Democratic state representative Katrina Jackson sponsored the bill to protect the mothers. “Our Legislature passed the Unsafe Abortion Protection Act by a wide bipartisan margin to protect the health and safety of women,” she said in a statement.

“Abortion has known medical risks. We encourage the Supreme Court to … allow [our] state to enforce its duly enacted laws aimed at protecting the health and safety of its citizens.”

The court ruled 5 to 3, with the four liberal justices and the swing-voting Anthony Kennedy voting to overturn the Texas law. That was decided only three years ago. Since then, Neil Gorsuch replaced conservative justice Antonin Scalia and Brett Kavanaugh replaced Kennedy.

Serving women’s health needs was regarded as paramount in passing the Louisiana law, Jackson noted. “The women of this state who are often coerced into abortion deserve to have the same standard of care required for other surgical procedures,” said Jackson.

In the prior case, the Texas law at stake also mandated abortion facilities adhere to ambulatory surgical center standards. This makes the current case substantively different.

Jackson spoke this past January at the 46th annual March for Life in Washington, D.C.

In upholding the Louisiana law, the 5th Circuit Court of Appeals referred to testimony from Cindy Collins. She had testified to the State Legislature in 2014 after being harmed during an abortion procedure. “I never saw the abortionist before the abortion or after it,” said Collins via e-mail. “I was hemorrhaging, and he told me to get up and get out. When I left, I had to get an emergency D & C from another doctor.”

Today, she serves as global advisor for Operation Outcry, a nonprofit group that mobilizes those harmed by abortion to share their stories.

“In the 35 years since then, I’ve counseled thousands of women,” said Collins. “I found I was not the only woman who has been left with an incomplete abortion, including parts of the baby left inside. I testified so other women will not have to go through the same ordeal as I did.”

The leader of the annual March for Life, Jeanne Mancini, noted the admitting privileges requirement ensures the highest standard of care for patients.

“Abortion activists are more than willing to lower the bar on women’s health in order to expand abortion,” she said. “But stricter clinic regulations are in the best interest of women.”

President of The Justice Foundation, attorney Allan Parker said his group will soon file an amicus curiae on behalf of The Moral Outcry group. Their brief to the high court will ask justices to use the Louisiana case to reconsider Roe v. Wade. “Now is the time to end the tragedy of abortion in America,” said Parker. “Over a quarter of a million Americans have signed The Moral Outcry petition calling on the Court to reverse Roe and Doe under the law of judicial precedent.”

Parker served as lead counsel for Norma McCorvey, a.k.a. “Jane Roe” in Roe v. Wade, before her death in 2017. She worked tirelessly during her life to overturn the case. McCorvey was born in Louisiana, a fact that one longtime local pro-life activist finds significant.

“The lie of abortion-on-demand was birthed on a falsehood, told to a woman from Louisiana,” said pro-life activist and Louisiana native Laura Aguillard, via e-mail. “Now I believe Roe will come to an end from a case originating from my home state.”

For nearly a decade now, Aguillard has mobilized pro-life prayer outside of abortion centers around the New Orleans area. Raising five children with her husband Stephen, a local pastor, she leads a chapter of pro-life nonprofit Bound4LIFE International.

Despite the uncertain outcome, Aguillard sees this latest court action as evidence of advance. “As a pro-life intercessor, I am beyond excited to see our prayers being answered swiftly,” she said.