Support for ‘Sexual Minorities’: Part of It Comes From Hostility Toward Christianity 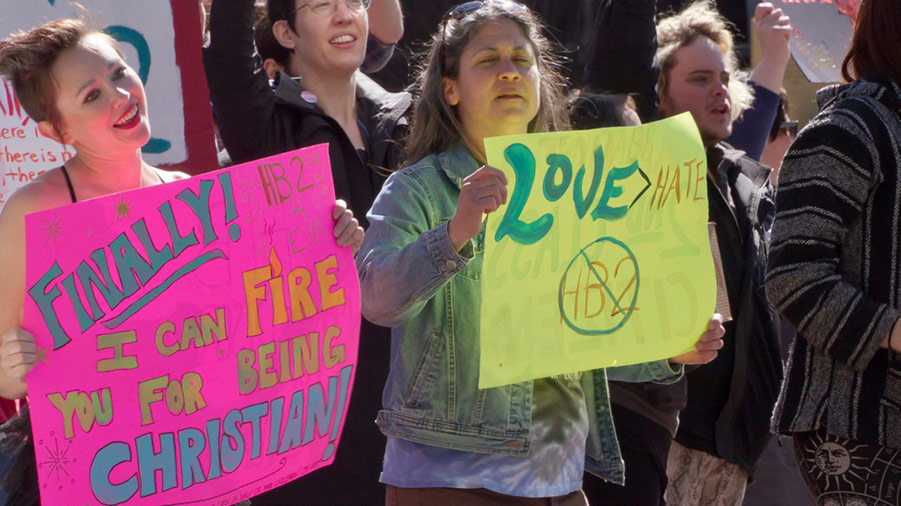 Why do people support sexual minorities — gays, lesbians and the transgendered? Is it purely that they agree with the people and their goals? My research, along with others’, suggests that while this appears to be their primary motivation, it’s not the whole story. Some of it is linked to hatred for Christianity.

I used a national survey that asked questions about how much persons liked or disliked sexual minorities, as well as how they viewed conservative Christians. This survey also asked about a variety of political opinions regarding same-sex adoption, transgender bathrooms, and more. I set up statistical models to explore how well several variables explained persons’ support for political goals pursued by sexual minorities.

There was no surprise in the main result. People support sexual minorities’ political goals because they like these minorities.

The Desire to Punish Christians

But I found another factor going along with it. People who dislike Christians also tend to support sexual minority politics. This remained true even after controlling for the first, more obvious result, already mentioned above. Apparently some of the support we see people giving sexual minorities comes straight out of some persons’ dislike for conservative Christians. (I’ve explained this research in more detail elsewhere.)

We must not ignore this. Anti-Christian hostility plays a definite role in today’s battles over sex and sexuality. Before the Supreme Court legalized same-sex marriage, many of the arguments in support of it appealed to “let them be” sorts of values: “Same-sex marriage is a private matter.” “It’s just between two people.” “It won’t hurt anyone else.” But the arguments have shifted since then. Now it’s about public accommodation, and charges of bigotry aimed at Christians.

This change of tone was to be expected if anti-Christian hostility is involved in today’s cultural battles. My research confirms that to be the case. For some people it’s not enough to legalize same-sex marriage; Christians need to be punished.

For some people it’s not enough to legalize same-sex marriage; Christians need to be punished.

Do I exaggerate? Or does this explain attempts to drive Christians out of business? To get Christian groups kicked off campuses? To use state laws to place Christian colleges on unequal financial footings? To try to take away the accreditations of said colleges? To have Christians fired for not supporting same-sex marriage — even if those Christians are simply preaching from the pulpit? A social movement that says it’s motivated by “Love wins” is also driven by a certain degree of hate.

This should raise warning flags for anyone who cares about how we allocate social and political power in our world. We’ve handed sexual minorities a lot of influence. It’s an amount that would be dangerous in the hands of any interest group, considering the human depravity we all share. But not all support for sexual minorities springs from noble sources. The movement has an ugly side.

We’ve overlooked that side of it. But my research stands as a strong signal warning us of anti-Christian hostility in the gay rights movement. The better we understand this and other motivations, the better we’ll be positioned to craft balanced policy on religious freedom and the rights of sexual minorities.