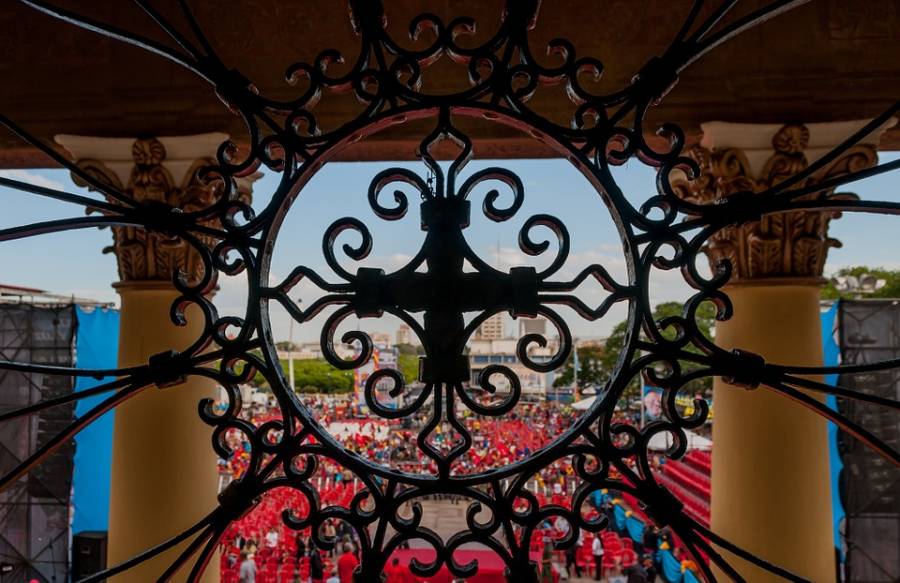 Basilica Of Our Lady Of The Rosary Venezuela Church

The scenes Tuesday from Venezuela sear the eyes. Military vehicles rolling over protesters, tear gas filling the streets, desperate people fighting to regain their country. Food has become so scarce in Venezuela, the average citizen has lost 20 pounds in the past year. The near collapse of the power grid often leaves much of the nation in darkness. A nation that was once a bright light of democracy.

Bishop Fernando Castro of Margarita compared Venezuela to the burning down of the Notre Dame cathedral, saying a “slow fire has consumed” his nation the past 20 years.

Socialism, with its call to rely on government and not The Source, has left this recently prosperous nation in ashes.

Yet, in this season of violence and lack, there is evidence the people of Venezuela are turning to the Lord.

According to The Washington Post, the shortages of electricity and food have people hungering for the Word and seeking the Light.

Amid the darkened alleyways, a strange, joyful sound emerged between the zinc-roofed homes. Tambourines jingled, maracas rattled, drums throbbed. Voices called all who could hear to salvation.

Buffeted by political and humanitarian crises, one of Latin America’s least religious countries is turning to faith. As the political stalemate between President Nicolás Maduro and opposition leader Juan Guaidó grinds into another month, and shortages of electricity, food and water reduce life to a daily struggle to survive, leaders across religious traditions are reporting a flood of worshipers, lapsed and new, searching for comfort and answers.

“All my Masses are full, which has never happened before,” said the Rev.Jesús Godoy, a Catholic priest at the Good Shepherd parish in the Chacao district of Caracas. He says he’s seeing more than 2,000 people each weekend.

“They beg for help,” Godoy said. “They want God to give them the tools to live in crisis.”

He has, in Scripture, provided the tools. For one, “Be strong and courageous, do not be afraid or tremble at them, for the Lord your God is the one who goes with you. He will not fail you or forsake you.” (Deut. 31:6)

Venezuelans to Be Restored. While Other Nations Face Ruin.

In turning to God, the Venezuelan people are choosing the wise course. Amos warns us about nations that fail to do so in their time of trouble.

“I also gave you cleanness of teeth in all your cities and want of bread in all your places; yet you did not return to Me, says the Lord.

And also I withheld the rain from you when there were yet three months to the harvest. I caused it to rain upon one city and caused it not to rain upon another city; one piece of ground was rained upon, and the piece upon which it did not rain withered.

So [the people of] two or three cities wandered and staggered into one city to drink water, but they were not satisfied; yet you did not return to Me, says the Lord.

I smote you with blight [from the poisonous east wind] and with mildew; I laid waste the multitude of your gardens and your vineyards; your fig trees and your olive trees the palmerworm [a form of locust] devoured; yet you did not return to Me, says the Lord.

I have sent among you the pestilence [which I made] epidemic in Egypt; your young men I slew with the sword and I took into exile your horses, and I made the stench of your camp come up into your nostrils; yet you did not return to Me, says the Lord.” (Amos 4:6-10)

Israel suffered when it would turn its back on the Lord. “For My people have done two sinful things: They have turned away from Me, the well of living waters. And they have cut out of the rock wells for water for themselves. They are broken wells that cannot hold water.”

Or as is the case with socialist Venezuela, they are power stations that can’t produce energy.

Still, there is hope. As the Post was discovering, the people of Venezuela in increasing numbers are calling out His name and seeking His face. They have assurance from God He will forgive their sin and heal their land.  As He told Israel through the prophet Isaiah:

“Once again you will dance for joy and play your tambourines.”

Please join us in praying for the people of Venezuela in their time of testing. And for church leaders in Venezuela to shepherd their flocks through these treacherous paths with wisdom and strength.