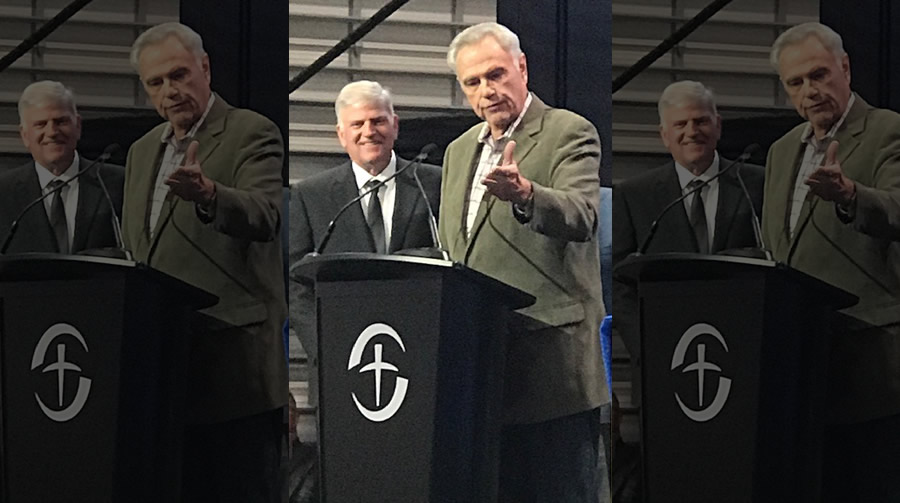 The Stream founder James Robison and Bruce Jacobson, LIFE Outreach’s Executive Vice President, attended the dedication of the Samaritan’s Purse Southwest Ministry Center in the Dallas/Fort Worth area Wednesday. Samaritan’s Purse is led by Franklin Graham, the late Rev. Billy Graham’s son. Robison spoke at the dedication and closed the event in prayer. “It was my honor,” he told The Stream.

“Betty and I have known the Graham family for many years,” said Robison. “I was honored to be invited to [the event]. It was wonderful to see Franklin, Ed Young, Jr., Dr. Paige Patterson and also meet Franklin’s youngest son, Army Major Edward Graham for the first time.” Robison added that Edward and his wife, Kristy, also serve with the Samaritan’s Purse in locations around the globe.

Graham tweeted in October that the new center will have U.S. disaster relief units and personnel working out of the Coppell, Texas, location. He added, “It will serve as our [Operation Christmas Child Shoeboxes] processing center for the region.”

We are excited that @SamaritansPurse will be opening a new Southwest Ministry Center in Coppell, TX, soon. We will have U.S. disaster relief units and personnel working out of this location and it will serve as our @OCC_Shoeboxes processing center for the region. pic.twitter.com/wsWhk2aKMT

“I am so proud of Franklin and the way he is continuing to build on his father’s legacy of faith and share the Gospel around the world,” Robison added. “It has been our joy to work with Samaritan’s Purse since Franklin assumed leadership and to support their outreaches. I know his dad would be so pleased.” To find out how you can pack a shoebox for OCC and for dropoff locations, please click here.

Franklin Graham Asks Christians to Pray for the President June 2: ‘The Only Hope’