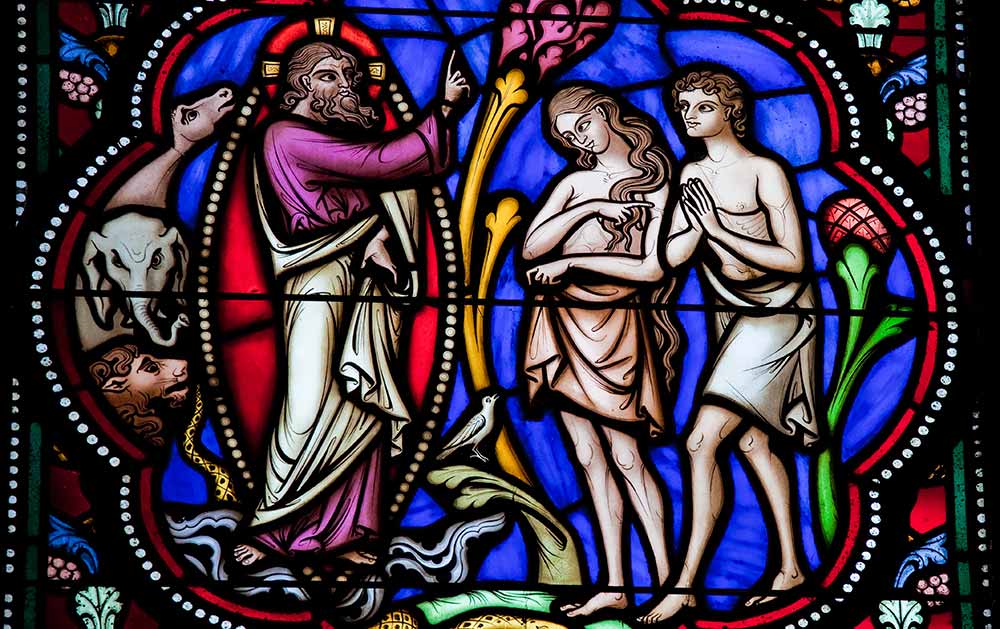 DUDLEY HALL — There were two trees in the Garden of Eden. Actually there were more, but the two primary ones were the Tree of Life and the Tree of the Knowledge of Good and Evil. Among the other trees were those producing all kinds of fruit for abundant provision for God’s first people. There was also at least one bush or small tree that turned out to be pretty significant. That bush provided a hiding place for the couple ridden with shame.

From behind that bush originated the various stories about the meaning of life. Alienated from God, afraid of God, and limited to the knowledge of good and evil, Adam and Eve speculated from behind that bush as to what God was really like, what he really wanted, and what it would take to satisfy or appease him.

These are questions that the human heart and mind instinctively demand be answered. From behind the bush humanity has been speculating and formulating stories that would make some sense of their world. In one sense, all the religions of the world come from behind the bush. Having lost the ability to see clearly in the spirit, Adam and Eve began the long history of humans trying to accurately define and describe God. Their descendants carried on the tradition.

What was here first? Since no one can really be sure, the answer is necessarily one of faith. Whatever was here, was it personal or impersonal? No one knows except by faith. If personal, was it one person or more than one? We can’t know except by faith.

So various stories have been constructed around each possible conclusion. The naturalist and the pantheist would say that ultimate reality is impersonal. It was either just matter, or it was a force that pervades all that exists. The polytheist would insist that there are many gods with different personalities and functions. The monotheist declares there is only one god. All of these are faith claims. No one who wasn’t there can vouch for reality, so each must trust some explanation that is beyond the personal experience. The naturalist trusts the power of observation and depends on the laws of science. The pantheist trusts intuitive impulses that beg for unity and peace. The polytheist assigns divinity to those dynamics of existence that are beyond human control. The monotheist trusts the revelations given to specific figures who tell and write down the story. All must admit to standing on a premise that cannot be proven empirically. Those who try to discredit views other than their own as just faith claims are falsely presuming that their own view is not.

What happened that created the conflict for human life? What is broken? This is an essential part of the story. The naturalist’s story is that we evolved from original matter and we just haven’t had enough time to become whole. The pantheist would insist that we are fragmented with personal identity having been exalted above our common unity. The polytheist would say that the various gods are at war and we are reaping the results. The monotheist would declare that the God who created has a design for us and that humans have violated his design.

The story demands a resolution. What does it take to fix the problem? The naturalist says we must cooperate with the evolutionary process. The pantheist pleads for humans to lose their separate identities by becoming part of the common one through various exercises of mystical meditation and reflection. The polytheist simply says that the gods must be appeased. The monotheist demands reconciliation by fulfilling the law of God — humans must be forgiven by God for their sins.

There are as many variations and intricacies in each story as we could imagine, but generally these are the main stories that have existed throughout human history. Some stories defy classification and attempt to synthesize all of these into a mixture. Others choose bits of the main stories smorgasbord-style and embrace their own mixture.

How does the Christian’s story match up with the others?

The gospel declares that humans cannot find God on their own. It is not a matter of putting all the options on the table and letting each choose his or her favorite. The perversion of the human heart tends to dictate to the mind choices that justify the perversion. If God had not acted to redeem us at his own cost, no human would ever know the truth.

So, what is the story? It is not only a good story. It is good news!

God, who is personal and social, existing in three persons, created all things. He made humans in his own image and gave them the dignity of managing creation. The humans yielded to the temptations of an evil supernatural being who promised them the benefits of self-sufficient divinity. They were alienated from God and so were all their offspring.

The whole human race is affected to this day by that great fall. Humans are sinners and must be forgiven. They are rebels and must be reconciled. They are bent toward selfish obsession. They must be liberated. They need more than just good law and basic commitment.

God acted to redeem and restore those he loved. God the Father sent God the Son to live as a human, and die as the eternal substitute. He then raised him from death and seated him in the place of authority — the place he intended for man in partnership with God. He sent the third person of the Trinity, the Spirit, to live in the individual believers and in their corporate unity. These people would fulfill the original purpose God had in creating the world with his image-bearers ruling it.

This story didn’t come from behind the bush, but from the single tree outside the walls of Jerusalem upon which Jesus was crucified. It is not the product of man’s speculation, but of God’s revelation. When it is told, his very presence testifies to its validity. It is the greatest story ever told.