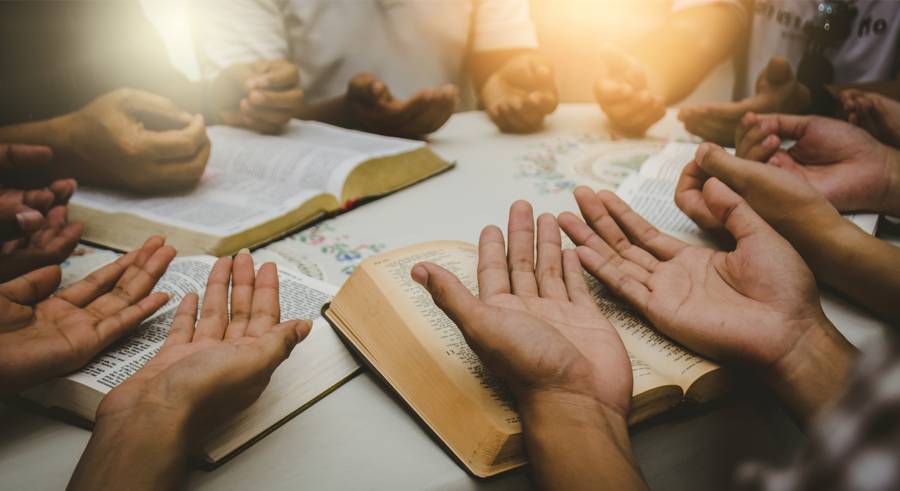 The prayer of John chapter 17 is sometimes called Jesus’ “High Priestly Prayer” to his Father for the formation of the glorious Church. It calls us into the future to be a gathering of people who are a witness of who he is. We are to be a people full of love, glorious, and truly one with him, each other and the Father.

This prophetic prayer steam rolls through the centuries. There are so many questions. How can this happen? What makes us one? What keeps us together? Is the answer simple? Isn’t it to be in Christ? Are we not to be all born again by the same Spirit of God that unites us? Do we not have but just one Father? Does not that make us brothers and sisters and one family, one Church?

So, how is it that this Church is so easily divided?

Let’s Take a Journey in Time …

I sometimes imagine Jesus coming to our city and calling all the Church (or churches) into an assembly. He is Commander and Chief over all. The excitement is electrifying!

First, the angels go about and separate out those that are not really his into an outside arena. Some well-dressed and highly garbed attendees are shocked to be sifted out of the gathering. They were never his to begin with … just pretenders.

Other relatively unknown attendees are given very prominent positions near the front. Some known to be leaders are behind them. It seems a bit odd. There is apparently a new order and set of priorities being introduced. As Jesus’ eyes scan over the crowd his face and emotions seem to make a full circle of expressions from loving passion to a forlorn nodding of his head appearing to say, “They should have known better.”

Jesus was with both of us all the time, but we were against each other … something seems very off about that.

While walking through the crowd, we all see some people that we avoided. We had disagreements. Oddly, it doesn’t seem to matter now. Being part of the bigger picture of God’s Bride is a deeper satisfaction. Hmmm … Jesus was with both of us all the time, but we were against each other … something seems very off about that. The word “grace” hits our ears. It has a ring of thunder to it.

As we all stand there, the same thought seems to go through all our minds at the same time, “Why did we wait so long to come together? We are a mighty army!” A deep unspoken conviction begins to weigh on the hearts of the masses. We have been divided and full of judgments that God doesn’t carry himself. We missed it.

Will All Those Who Brought Division Please Stand?

The Lord Jesus addresses those gathered, “Please be seated. Before we go on I want to clear up some matters for the future.” The crowd is curious. “All of you that were leaders and brought division to my Body please stand up.” Suddenly individuals are involuntarily standing as if someone prodded them with a pin. They want to sit down again, but cannot.

“Now all of you that taught that my spiritual gifts do not continue to work in today’s church, please sit down … I forgive you.” A large number are awkwardly seated.

“Now all of you that abused your authority and really were not servant leaders, but made yourselves rulers and mediators between me and my people, please sit down … I forgive you.” Another group is seated.

“Now all of you that rejected anyone who did music and worship outside of your style, please sit down … I forgive you. Many sheepishly sit.

“Now those that stifled my daughters from their callings in ministry with your “Women in Ministry Limits,” please sit down … I forgive you.” More embarrassed faces sit down.

The Fear of the Lord

“Now I address those of you that victimized the innocent spouses for the sin of the unrighteous covenant-breaking spouses who divorced them. You refused the innocent the liberty to remarry and have family again or even excommunicated them … I forgive you.” Another number of leaders sat.

“Now those of you that persecuted those who did not embrace your end-time teaching and called them heretics … I forgive you.” Several more red-faced people sat down.

“There are others that through idolizing your own opinions or interpretation of my Word, or whose selfish ambitions, or desire for personal gain have brought division into my Church. I forgive you of all of this because of my grace that was released on the cross. This type of division shall not carry into my kingdom. It grieves the heart of the Father, but it is being removed as far as the east is from the west. Go forward and do not commit this sin of division again.”

A sense of humility comes over the assembly as a wind blows across the grounds. Other sins of carnality and lack of holiness fall off of people under the reality that God sees all. What remains is a sense of Father’s love full of grace and acceptance in Christ.

The fear of the Lord regarding the dividing of his beloved Church has been reestablished. Now they begin to shine as a bright city on a hill. They are ready to go forward to the glorious resolve of becoming one Church and Bride who are ready.

Am I Quick to Divide and Slow to Reconcile?

As I come down from this imagination, I begin to look at myself. “Am I part of the problem?” Am I quick to divide and slow to reconcile the Body of Christ?

Would I be among those standing? Has stubbornness and pride squelched the voice of the Holy Spirit? Am I guilty of misguided zeal that has brought division, while thinking I was uncompromising? Can I admit that I may be wrong? Even worse — am I offended or scandalized when Jesus is not?”

Join me in praying, “Lord help me to build with you and not be in the way.”

Jesus said, “… and on this rock I will build My Church and the gates of Hades shall not prevail against it” (Matthew 16:18b, emphasis added).

M. John Cava is the founder and president of the World Outreach Center in Fort Mill, South Carolina. He has taught in several bible schools, was Associate Director of GSMA mission’s agency and was founding Director of Missions for the Brownsville Revival School of Ministry and FIRE School of Ministry. John and his wife, Joanne, have four children and eight grandchildren.

Should We Cut These Verses About Unity Out of Our Bible?

Can We At Least Agree on This?