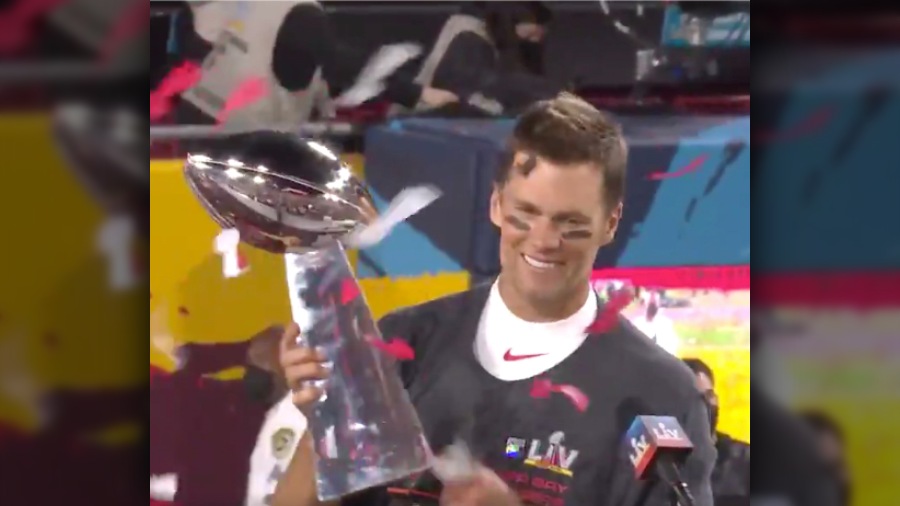 Tom Brady is the G.O.A.T., the Greatest of All Time. And he would have been the GOAT even if he’d spent Sunday eating 3D Doritos. Instead, he’s also the GORN. The Greatest of Right Now. The veteran quarterback easily won his Super Bowl duel with young phenom Patrick Mahomes, leading the Tampa Bay Buccaneers to victory over the Kansas City Chiefs, 31-9 in Super Bowl LIV.

This was Brady’s seventh Super Bowl win, his first for Tampa Bay after winning six with the New England Patriots. His performance earned him his fifth Super Bowl MVP award.

The Super Bowl was rightfully built up as a match-up between the ageless Brady and the magical Mahomes. One, a certain Hall of Famer, the other already well on his way. Unfortunately for Kansas City fans, Brady barely got his uniform dirty while dissecting the Chiefs’ defense.

And Mahomes? The Bucs defense was in his face so much, their uniform numbers should have been N95. Mahomes was on the run all day, darting, dashing, spinning like an escaped convict fleeing bloodhounds. The Chief’s makeshift offensive line breaking down more often than a 1970s Pontiac. Poor Mahomes was sandwiched so many times he could have done a Super Bowl ad for Subway.

By the end, hobbling on a bum toe, clearly hurt and battered, his head listing to the side between plays, Mahomes was still flinging the ball from all angles, while draped in Buck defenders. That State Farm agent from his TV commercials is calling up to see if he wants to place a claim for body damages.  Pretty, no. Gritty, yes.

No quit in these Chiefs. @PatrickMahomes

This was the first game in his professional career that Patrick Mahomes lost by double digits. He was only 26 for 49, with two interceptions. It might have been his bravest performance yet.

No, this was not a Super Bowl for the ages. But Super Bowl LIV will be remembered as the one where  the greatest of all time held off Father Time one more time, to defeat the one who, in time, could become the greatest.