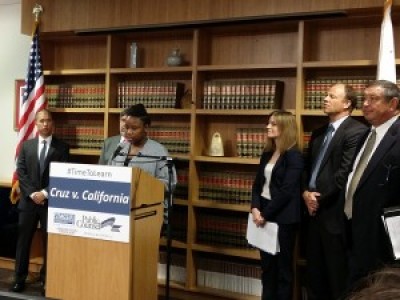 By Amelia Hamilton Published on November 8, 2015 •

The California State Board of Education has come to an agreement with six high schools in the state that were putting students into “sham classes” in which they received no instruction. The students from Compton Unified, Los Angeles Unified, and Oakland Unified school districts (and were later joined by 5 other school districts), came forward in a lawsuit last year for being assigned to classes were they were assigned nothing at all or menial tasks such as picking up trash or cleaning erasers. In some instances, they were sent home.

Under the agreement, the State Department of Education will work with these school districts to ensure that this does not continue to happen.
It is a disgrace that it was allowed to happen in the first place. Tax dollars are paid to ensure that children are given an education, and it is widely assumed that this is what happens when a child is sent to school. However, as this has shown, that is not always the case. Parents, students, and the community must be active partners in learning to ensure that the schools are careful stewards of our tax dollars.

Read the full story at EdSource.