So who's being (literally) divisive? 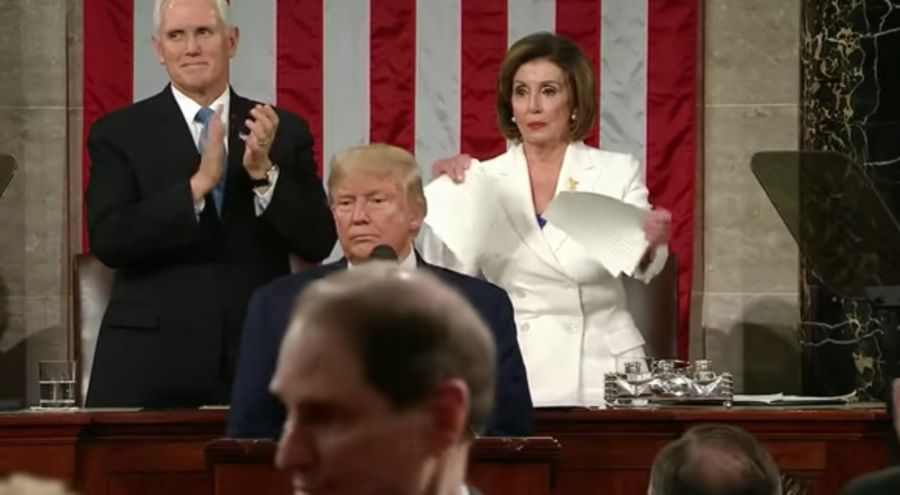 Someday we’re going to find out just how much money President Trump has paid Speaker Nancy Pelosi. First, she launches a doomed impeachment effort that has resulted in a 10-point jump in Trump’s Gallup poll numbers.

And tonight, in the State of the Union, immediately after the president finished with a rousing, Reagan-esque ode to America — as tears still flowed from the welcoming home of an American hero — Pelosi with great and deliberate flourish ripped up Trump’s speech.

After last night’s debacle in Iowa, and tonight’s Democratic dour-fest, Pelosi sent a loud and clear message to America: “Trump’s not the problem. We are.”

Pelosi’s carefully crafted stage performance was designed to top last year’s viral mock clap. The phoniness of the gesture makes it even that much more grotesque. Her excuse for doing it? It was “the courteous thing to do given the alternative.”

What hooey. Was Trump combative? Making threats? Policy Take-It-Or-Leave-Its? But for segments on health care and immigration, he wasn’t critical on partisan issues. And even there, it’s not like he said anything on either topic he hasn’t said often before.

So what was the problem? Was it the call for a federal ban on partial birth abortions? Prayer in schools? Something against 100-year-old Tuskeegee Airmen? Little kids going to school? The choice of font?

As Team Trump tweeted: “Classless Nancy Pelosi ripped up a speech that said ‘The unemployment rates for African-Americans, Hispanic-Americans, and Asian-Americans have reached the lowest levels in history.”

Classless Nancy Pelosi ripped up a speech that said:

"The unemployment rates for African-Americans, Hispanic-Americans, and Asian-Americans have reached the lowest levels in history."#SOTU pic.twitter.com/PdKlGN9xx6

Sen. Lindsay Graham said. “She can tear up the speech, but she can’t tear up the accomplishments.” You can understand the frustration. She’s lost impeachment, she’s losing her grip and she’s just being a terrible sport.

The End to the Reign?

Pelosi’s act reminds me of the legendary Ohio State football coach Woody Hayes. The Buckeyes were losing. In frustration Hayes clubbed a player from the opposing team. His career was over in an instant. It’s legendary boxer Roberto Duran while being pummeled by Sugar Ray Leonard quitting mid-fight, saying “No Mas, No Mas.” His reputation was destroyed in an instant.

Will the ripping up of the speech bring the end of Nancy Pelosi’s reign? A pathetic end to an impressive career? It felt like that in real time. But it’s too early to tell.

However, it’s not too early to tell the State of the Union was a Trump success. In a very non-Trump-like way.

The Elephant in the Room, the Babies in the Chamber

Trump did not address the elephant in the room: impeachment. He did not mock last night’s Iowa caucus folly. There were no funny asides. No Trump-esque moments. Instead, Trump kept focused on his successes. He let his accomplishments do the talking, the applause from Republicans do the shouting. His guests get the glory.

Trump vowed earlier in the day to be “low-key.” And he kept his promise. Brilliant strategy.

A low-key Trump was a perfect counterpoint to the highly catty Democrats, who sucked on every bit of American success like it was a sour ball. They reacted to record low unemployment numbers as if Trump had injected them with the coronavirus. The return of manufacturing jobs was greeted with the joy of a tax return. The killing of Soleimani? Like the killing of Bambi.

Most sickening, they mostly sat on their hands during the emotionally overwhelming moment cancer-stricken Rush Limbaugh was honored with the Medal of Freedom. Had it been Michael Moore, any conservative with a heart would have been bawling.

Democrats, oh, dear Democrats. When Donald Trump is the most dignified politician in a room, you’ve got problems.

A vast group of female Democratic lawmakers wore white to commemorate women’s suffrage. Seems they took the “rage” part of “suffrage” to heart. But they were also downright baffling. As Trump spoke about prescription drugs, the group suddenly jumped up in unison, shouting, holding up three fingers.

Democrats, oh, dear Democrats. If you’re going to disrupt a State of the Union, make sure it’s something we at home can understand. Three fingers? What’s that? Read between the lines? Three beers over here please? Ilhan Omar’s going for the three-peat on husbands?

All told, it wasn’t Trump’s speech that was shredded. Just any hope Democrats have in 2020.