When my aunt suddenly couldn't see, she realized how important it is to hear the Word of God. 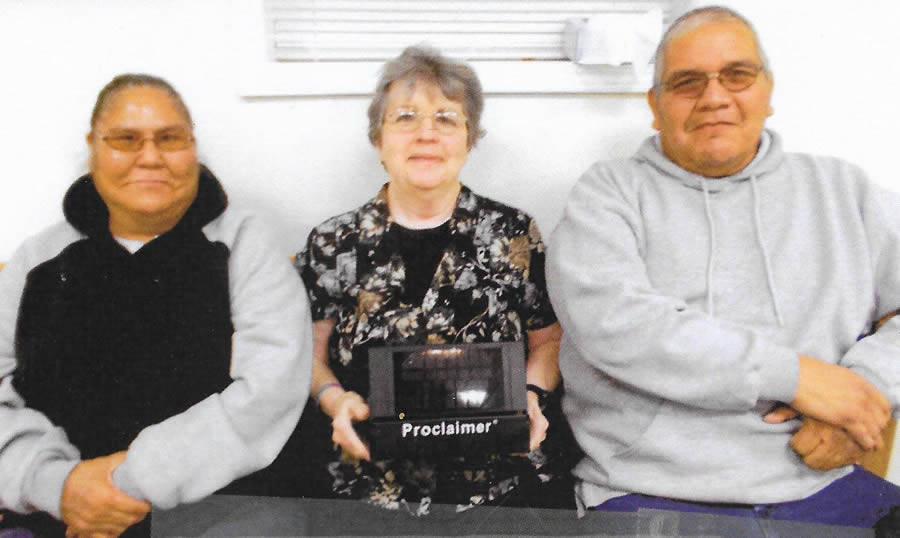 Alice with a Navajo couple who received one of the proclaimers.

In March, 2012 my Aunt Alice was diagnosed with brain cancer. It was a devastating diagnosis but we tried to keep our chins up and prayed for the best. When her husband, Charles, was diagnosed with pancreatic cancer one month later, it was a double blow.

There came a time during the diagnosis process that Alice couldn’t see. “I was sitting in church and I started seeing two pastors,” she recalled. Eventually her vision deteriorated to the point that she couldn’t read. An avid reader, it occurred to her that the Bible, her favorite book, was completely inaccessible to her. “It was as if the Lord said to me, ‘Look! See, other people can’t read it.’ It hit me that even though I’d been very active getting Bibles to people in Russia, Cuba, Panama and the Philippines, these people can’t read for the most part. They have this precious, God-given book in their hands but it’s not going to do a lot of good,” she said. “I thought ‘Oh, they need to hear the Word of God.’”

She contacted missionary Betty Welch who translated the Bible for the Tucano people in Colombia and got information about a device called a “proclaimer.” A proclaimer is used to bring the oral Bible to people in their own language and, although it uses batteries, is solar powered and can be charged with solar power as well. When her husband died a few months later, Alice asked that those who wanted to buy flowers donate money to pay for the $100-a-piece proclaimers. She was able to send 17 proclaimers to the Tucano people.

Convicted that the Lord wanted her to become more involved, Alice prayed and began thinking about the biblical story of the widow’s mite and how the widow didn’t have much but gave what she could. “I’m a widow,” Alice said she thought, “and I don’t have much, but I’ll do what I can.” She started a ministry through her church called The Widow’s Mite Pocket Change in August, 2015. She asks only for pocket change, but sometimes people give more. She connected with Faith Comes By Hearing, an organization that collects the money for the cost of the devices and distributes the proclaimers directly to where they’re needed. Through the money donated by Alice’s church — literally pocket change — they’ve distributed 67 proclaimers. They’ve sent them to an Indian reservation in Idaho, Nicaragua, Zambia, Cameroon, Sierra Leone, Mexico, South Sudan, South Africa and six other countries.

“They’re hungry to hear the gospel in their own language,” said Alice. “Many are coming to the Lord because of it.”

My Aunt Alice has always been a woman of strong faith, but her experiences with the proclaimers are strengthening her faith even more. She prays each month about what God wants her to contribute toward the proclaimers from her own meager funds. Recently, her faith was tested when she felt the Lord tell her to contribute an amount that she really couldn’t afford. She thought it over and then said, “Okay, Lord. I have to depend on You because I know I can’t do it.” The very next day she recalled “an angel” coming to her house with two big boxes of groceries. She paused for dramatic effect. “You can’t out-give the Lord, Nancy,” she told me. To top it off, another “angel” put money in her checking account.

She saw another miracle when, while getting ready to ship Bibles, she got a check for $17. “I prayed, ‘Lord it sure would be nice if you let this pay for the shipping,’ since she didn’t have money to send them. When she went down to the post office she was amazed. “You know how much the shipping cost?” she asked me excitedly. I could only guess. “Seventeen dollars!” she giggled.

Alice said she prays every day that the Lord will expand her ministry and show her what else He wants her to do. “If He wants to add to it I’ll be happy to follow His lead,” she said. “I pray every day for Him to show me what he wants me to do today and in the future. What I can handle and so that He’ll allow me to serve. I don’t want to take any of the glory away from the Lord.”

These days Alice’s eyesight is getting better and she hopes to be able to drive soon. She’s cancer-free and her doctor said “It’s gone. Don’t worry about it.” Regardless, Alice said when the Lord calls her home she’ll be ready. For now, she’s spreading the Gospel one Bible at a time and relying on Romans 10:13-15:

More information on Faith Comes By Hearing may be found at https://www.faithcomesbyhearing.com/about/our-story

When Truth Causes a Riot