This year featuring a NASA scientist and the Nationals’ team mascot, the SMASH Contest uniquely combines science, sports and art to incite a desire to learn. 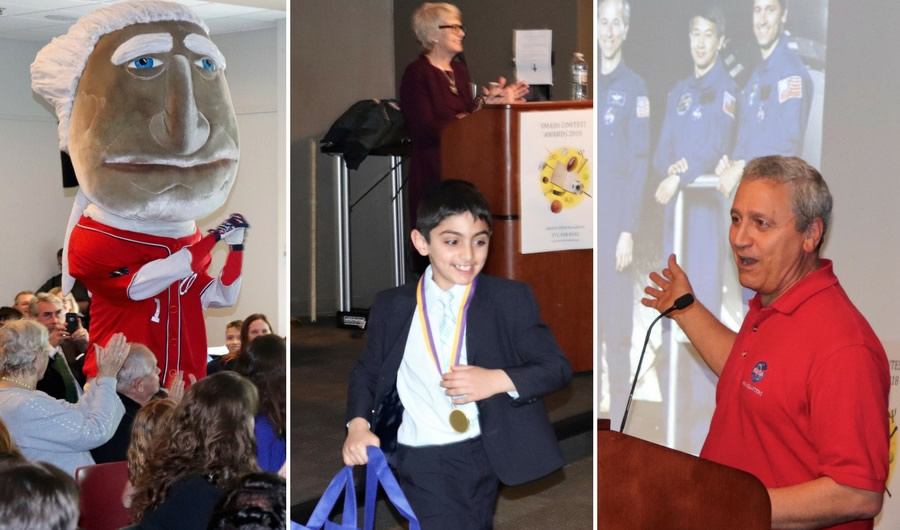 “Certain principles in math and science are a little hard to grasp,” she says to The Stream. “We want to help kids connect those ideas with something they’re comfortable with at that age — the world of sports.”

Second grader Suren Sarafian of Jamestown Elementary School showed off his winning entry as his dad looked on with pride. “I loved drawing it because football is my favorite sport,” he said. “The Patriots and Eagles played in the Super Bowl.”

“The Patriots didn’t win, but Tom Brady is still the star in my drawing.” Students drew from ideas in scientific, technical, engineering or math (STEM) subjects. “When Alex Ovechkin hits a slap shot, his mind is instantaneously making calculations about gravity, motion, aerodynamics, force and parabolic curves,” said Pari. “The sooner you like science, the better athlete you’re going to be.”

Costumed mascot “George” of the Washington Nationals baseball team made an appearance, to kids’ cheers and parents’ photos. Awardees received two tickets to a Nationals game, in addition to rewards from Think Fun and Arlington Planetarium.

“An art contest is the perfect medium,” says Pari. “It’s unrealistic to think a kindergartener is going to write an essay about Newton’s first law. But it’s easy to understand that gravity is what makes a soccer ball come back down to earth. Even a five year-old can show what gravity means,” she noted.

Along with remarks by Yale scientist Dr. Beth Russell, the program featured a visual presentation from scientist Dr. Larry DeLucas. Students sat in rapt attention as the biochemist showed videos and photos from his NASA spaceflight orbiting the earth.

“I was more interested in sports in elementary school, so this connection means a lot to me,” says DeLucas in an interview. “It took a really good high school chemistry teacher to get me excited about science.”

“Things like this program can give kids that passion at an early age,” noted the NASA scientist. Larry DeLucas hung up his athletic shoes after high school and went on to earn five college degrees. His Ph.D. in biochemistry led him into the field of X-Ray crystallography, specifically studying the structure of proteins in the human body.

“From the microscopic structure of bacteria and viruses, we better learn how the body works,” he says. “You can design drugs to interact with it and fight different diseases. But the whole bottleneck in this field is getting good crystals.”

In the mid 1980’s, DeLucas first proposed taking this process into space. “In a weightless environment, we theorized the crystals grow more perfectly,” he recounts. “I got turned down several times by NASA after submitting many proposals. After seven years, I got selected. So never give up!”

DeLucas flew aboard the Space Shuttle Columbia in summer 1992. The data received from that two-week mission have resulted in pharmaceutical drugs being developed with less cost and greater efficiency. The experience also gave him a new way to engage students.

“Before I flew in space, I would give talks in schools — and you couldn’t hear me speak because kids weren’t paying attention!” he recalls. “Now when I go to a high school, even with a thousand students in attendance, you can hear a pin drop. Space is so exciting to kids and a great vehicle for getting them interested in science.”

Last year, Pari connected with DeLucas after he spoke at a STEM conference. “What he found really inspiring about our program is how we start at the youngest school-age kids,” she said. “Our winners had a role model recognize them and present each one a medal.”

“You don’t get to meet a real-life astronaut very often.”

One Family’s Story of Faith and Survival

Aram Sarafian and his family stayed long after the program’s end to meet DeLucas. A Massachusetts native, he noted how he and his sons’ bonding over football inspired contest entries from Suren and his younger brother Daron.

“They’ve been learning about football by watching the Patriots with me,” he says. “The boys don’t understand the game fully, but we root for our team together. They aren’t actually allowed to play football yet!”

A veteran of the U.S. Army, Sarafian recently retired after 31 years of service. He mentions his family has invested in another form of education — one linked to his heritage. “Our faith is very important to us,” says Sarafian. “My family worships at Holy Cross in Bethesda, which is part of the Armenian Apostolic Church founded in the first century. The boys attend classes there, learning the Armenian language.”

The boys’ grandfather Garo Armenian sat on the front row as his grandson received an award. His family had emigrated to the U.S. to escape the horrific Armenian genocide, when more than a million people were exterminated in Turkey in the early 20th century. Having lost dozens of loved ones, the elderly patriarch said it gives him perspective on what matters.

“Family is the glue of the social environment,” says Garo Armenian. “In the family we learn morals and have health, balance and happiness in life. Without such families, it’s hard to imagine that a nation can survive.”

His Army veteran son has stayed this course, volunteering as a den leader for their local scouts troop. “My boys participate in Boy Scouts where I help lead,” says Sarafian. “Especially in this day and age, having a moral compass is really important for anybody growing up.”

“Later on, if kids get into trouble and don’t know their way, having faith and values is as important as any academic education they receive,” he concludes.

“If you can get a child excited about learning, there is no limit to what they can accomplish,” says Pari.

Growing Need for Scientists and Engineers

“Our first year, we had about 80 entries,” she says. “Now with Fairfax, Arlington, and Washington, D.C., school districts participating, we’ve been growing ever since. We’re working on scaling this up to a national program to reach one million kids.”

SMASH counts NASA scientist Larry DeLucas among its backers. “This is a very important effort as students progress through elementary school into high school,” he notes. “It can help them get the right background, excel and become a productive scientist or engineer.”

Both expressed concerns about current national trends among students. “If a child doesn’t get into math and science by the time they’re eight years old, they generally don’t pursue it further,” says Pari. “We’re losing a lot of brilliant minds because we haven’t captured their attention early enough.”

DeLucas cited analysis showing science education is bringing another world superpower to the forefront. “China is producing two new engineers for every one that we produce, and that’s not good,” he says. “Our country needs more scientists and more engineers. If we want to keep up technologically, we’ve got to get our kids excited about science.”

Community leaders in Arlington hope this program leads to kids earning scholarships and, ultimately, a better future. “If you can get a child excited about learning, there is no limit to what they can accomplish,” says Pari.

Learn more about the SMASH STEM Foundation and its growing annual competition.

The Absence of God is the Big Issue