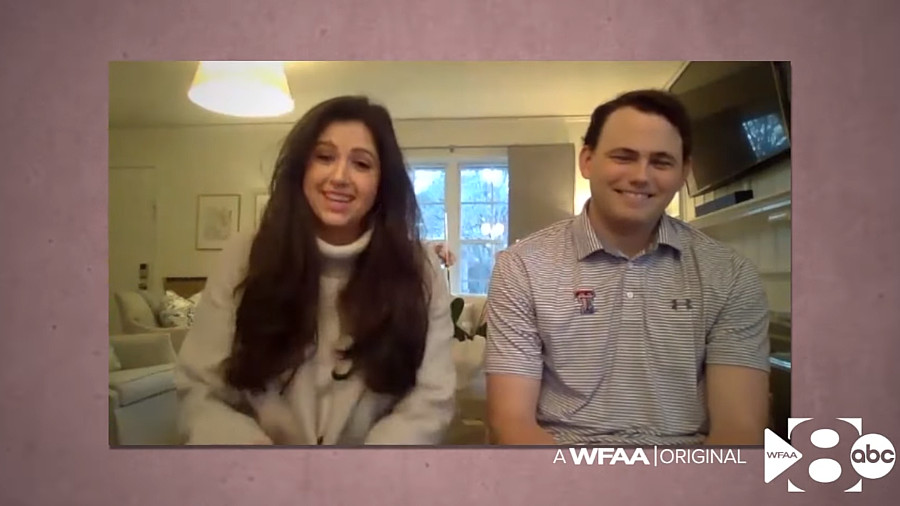 In a time when nearly every news story is discouraging and a complete beat down, my eyes caught a story about my favorite airline — Southwest Airlines — and a love story started on a flight from New York to Dallas.

The story starts with two strangers heading on an early flight at 5 a.m.

‘Maybe I Need to Save Somebody’

Michael, a minor league baseball player in the Minnesota Twins farm team, who was going back to Dallas after visiting a friend — and Caitlyn, who had just spent a girl’s weekend in New York and without her sister insisting would not even have put on makeup that morning before leaving for the airport.

Southwest Airlines does not have assigned seating, so people pick their own seats.

Michael chose a window seat on the exit row and Caitlyn seeing the handsome man decided to pick the seat on his row, but on the aisle.

In the middle seat came Pastor Bonny Andrews — a minister originally from India who carries a vision for God to impact lives in New York and cities around the world. You can see from his messages and his smile online that he loves people. His life mission is providing Jesus as the answer to every problem for every young person in the world.

Thus began the love story that started with one person’s obedience to talk to people during an inconvenient time.

This founder of Transform Cities and LiveJam, a youth movement, that according to his ministry website, has reached more than 2.5 million urban youth with the gospel of Jesus Christ since 2005 in 180 cities — was traveling for the first time to the state of Texas.

He had a clear choice. Sit there in the middle of these two young professionals — sleep, read, or listen to music — or start a conversation.

Thus began the love story that started with one person’s obedience to talk to people during an inconvenient time. What started out as a casual conversation about food and travel turned to family and faith.

Here were two young professionals traveling way too early in the morning talking to a passionate Indian minister. They pointed him on what to do in Dallas and where their favorite restaurants were. Then the conversation turned to the most important things in their lives. I can imagine that it might have started out a little uncomfortable with three strangers chit-chatting and partially disturbing the people who were trying to sleep around them. I have had those conversations on airplanes myself. I can then imagine Bonny steering the conversation ever so slightly to his story and his love for Jesus. Soon it was an intimate conversation between new friends where real connection and community was found.

The four-hour plane ride had such an impact on all three of them that they prayed together before getting off the plane and felt in some way as if they were leaving friends. Michael and Caitlyn both texted a family member right after they landed with the thought that they had found their soul mate. Caitlyn texted her mom – “I just met my husband. I know for a fact. Don’t call me crazy. I promise this is it.” Michael as well texted his sister “I think I just met my wife.”

A conversation led by a man who chose to reach out to two young people in hope of sharing Jesus with them — culminated in them sharing their deep faith with each other, a prayer where they brought God into the direct middle of their starting relationship, a date orchestrated by a social media message a week later, and then a proposal of marriage.

Pastor Bonny was able to pray for Michael over the phone the day he proposed a year later and then was asked by the couple to officiate the wedding.

One Simple Act of Obedience Can Lead to Lasting Change

I am sure Pastor Bonny could never have imagined on that sleepy morning that his act of obedience talking to two strangers would produce a marriage proposal a year later. His heart was just for people and sharing the love that he had found in Jesus.

When we hear that small still voice that we need to step past our fears and share the hope that we have found with others — do we do it?

Will we follow the Holy Spirit and speak encouragement to that lady we see in front of us at the grocery store?

Will we talk to our co-worker who we discern is trying to survive in the middle of loneliness and depression?

Will we care enough to inconvenience ourselves — denying ourselves ten minutes of entertainment, being late for an appointment, or like Bonny not sleep on a flight but instead choosing to care for people?

People are Hungry for Real Connection

In this lonely season, people are hungrier for real connections than ever before. We are isolated more and more — stuck in our homes — trying to find life and community on our phones, scrolling social media, or watching online church. It does not matter how old we are, we need people.

Having a real conversation with other people provides happiness, a feeling of belonging, and fulfills a place in our hearts for love.

During this time of more and more isolation, are we connecting with others?

Are we looking for ways to talk to people, even six feet apart?

Do we smile, wink and move on, or stop and connect even for a few minutes?

Those simple connections bring us alive and make life worth living. Let’s remember that everyone needs deeper conversations, not just superficial touch points on the internet.

Our Faith Needs to be Shared More Than Ever

In this Southwest Airlines story, these young people connected with each other not just over food choices or their trips to New York – it was the sharing of their faith one with another that created the first sparks of love.

Even though these three strangers all had faith stories before they boarded their flight, their story reminded me again of how much we need to be sharing Jesus with others. Our simple stories of God’s work in our lives, if communicated, can impact hearts. The Word of God is alive and powerful! When we talk about truth, people change. The Holy Spirit uses the words of the gospel to penetrate hearts. This miracle of redemption can only happen if we open our mouths to share this good news that has changed us.

Jesus — Only Hope for Every Flight

Even though Michael and Caitlyn already had faith, the motivation of Pastor Bonny to share the good news of Jesus made a lasting impact on their lives.

Jesus is the only hope for every person on every flight.

Will we follow Bonny’s example to be inconvenienced, to provide a place of connection for people, and to share the only hope that we have — Jesus?

If we are obedient, we will see more love break out all over our world — and maybe we will read more eternal love stories not just from Southwest, but Delta, United or American Airlines as well.

Do Not be a Cow Ashamed He Can’t Fly

Talking About Jesus: A Young Believer Outshines His Teacher