Some Day, We’ll Get Back to Baseball — and God

Vin Scully and the Return of What Counts 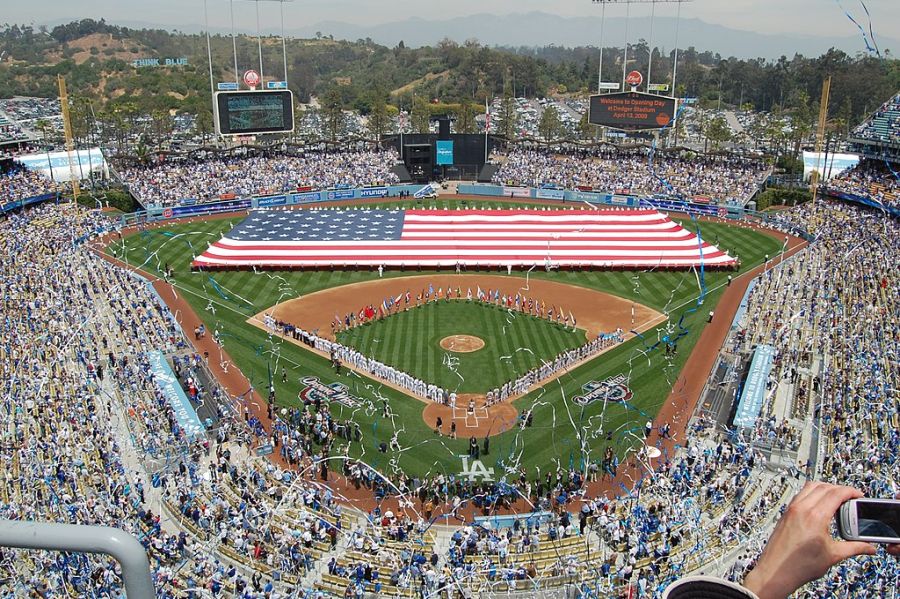 Update: Major League Baseball is looking a possible start to the season in May, ESPN is reporting. The tentative plan is play games at Phoenix-area stadiums, with no fans, and personnel sequestered at local hotels. If the plan holds, baseball would be the first major sports league to return to action.

Legendary Dodger broadcaster Vin Scully did not invent baseball. He just perfected the sound of it.

Dodger fans long were mocked for leaving games early and showing up late. This was not due simply to freeways and fickleness. Part of the reason was Vin Scully. He brought the game so deeply alive, it was just as good as being there live.

For me, Vinnie was there through a terrible break-up, adjusting to my new life in California, economic troubles, Rodney King, the L.A. Riots, O.J. Simpson trial, gang wars, water shortages, rolling blackouts. He was the sunny soundtrack of summer. I hear Vinnie’s voice and picture sunsets in Chavez Ravine, three-game series with pal Jan, Dodger Night with Living Faith Christian Church.

I recall sitting in the stands with the late, great voice artist Mary Kay Bergman and her beloved husband Dino; Dino with a Dodger Blue transistor radio in his hand to hear Vinnie call the game … while at the game.  Mary Kay singing the National Anthem as Roseanne Barr two days after Barr’s infamous rendition. (What I’d give to have Mary Kay sing a parody of her South Park classic “Blame Canada” called “Blame China.”)

Fortunately, we still do have Vin Scully. Although he’s is retired, he was on the Fox News Rundown podcast last week discussing the delay of the baseball season. But Vinnie had more on his mind than sports. A man of deep faith, Vinnie spoke of our nation’s return to God.

Vinnie also predicted a coming together across partisan lines. “More people will be coming back to the faith. And now that this terrible thing is upon us, people might very well get back to the center. And it’s a better world. We’ll see ….”

On Sunday, The Wall Street Journal asked “The Big Question for Sports: When Will You Feel Safe Around 20,000 Strangers Again?” The writers doubt fans will feel so eager to head to the stadium. I beg to differ.

First off, in this “better world” Vinnie talks about, these will not be strangers. They will be fellow survivors of the coronavirus fight. They will be brother and sister pledges in the fraternity of Dodger fans … or Nationals fans … or Yankees fans. We will put on the colors of our team, even if we have to cover our face. (A company that makes Major League uniforms has turned to making masks. Right now it’s for first responders. How soon will they putting them out for the general public?)

The uplift of cheering for our teams in person outweighs the anxiety. Remember how it was after 9/11? When the stadiums reopened we went to the games. Sure, we kept our eyes out for suspicious activity, we were wary of anyone approaching the stadium with a backpack. But we choked up on our emotional bats and handled the wicked curve. This time we’ll be wary of anyone who coughs, even if it’s over an errant piece of pretzel. But we’ll be there.

In fact, I predict we’ll be there in droves. During my six seasons in the Dallas-Fort Worth area, I have yet to go to a Rangers game. (Even though, technically, they are the team of my early childhood. My Washington Senators moved to Texas and became the Rangers after the 1971 season.) Part of the reason is the stadium was just down the road. I could always go. I mean, there’s 81 games in Arlington a year. What’s the rush? I took the opportunity for granted.

More Determined Than Ever

But now that some virus has taken from me the opportunity, I am more determined than ever to go. I want to help christen the Rangers’ new stadium. I want to hear that indelible sound of the crack of the bat. I want to be mesmerized by the sight of groundskeepers waving their hoses as they water down the infield. I will tell myself I’m blessing a local business by having an extra hot dog. I will relish being among fellow baseball fans again.

Coronavirus is one thing. Baseball fever? Nobody’s found a cure for over 120 years. How many ache for the simple experiences we took for granted a seemingly distant season ago?  Home runs, hugs, and high fives.

Oh, James Earl Jones was right when he addressed the doubters and the cynics at the end of Field of Dreams.

Be it to a cornfield in Iowa, Chavez Ravine in L.A., Nationals Park on the edge of The Swamp, or that state-of-the-art stadium rising over the Texas Plains. As Vinnie prophesized, we will come to the center. Come together. Come together for the game of life.

The Red Sox: The Team for Conservatives

On Baseball, Beach Balls and the Beauty of Dodger Stadium