When Society Shuns Faith, This Rabbi Points to Our Core Common Truths 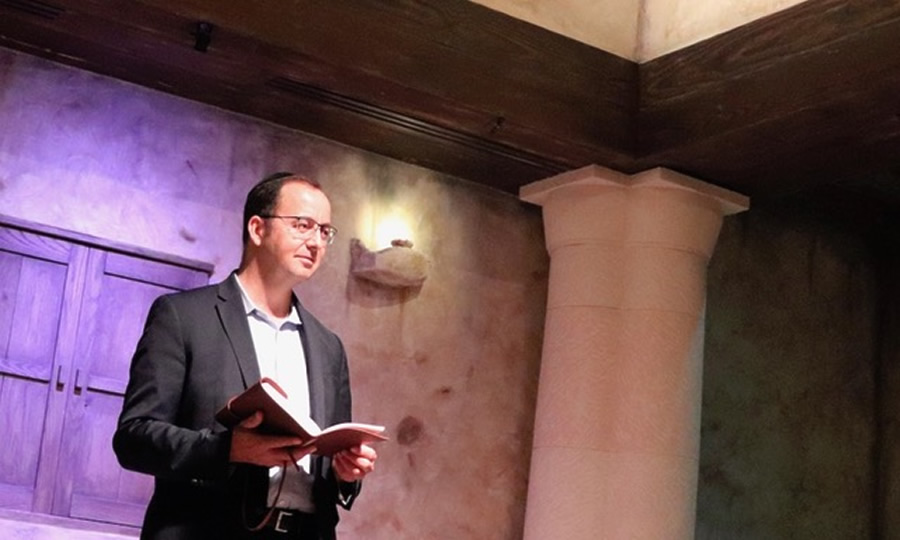 When speaking on issues of faith and values, U.S. public officials often lay claim to the nation’s “Judeo-Christian heritage.” Yet the former religious traditions have far less visibility than the latter.

According to Pew Research Center, the current American population comprises 70 percent Christians and two percent Jewish believers. The two faiths share a common text in the Hebrew Bible, including the Torah (the first five books) and the rest of what Christians call the Old Testament.

“Some people are convinced the Bible is an antiquated document which has no relevance,” Bergman tells The Stream. “Yet it contains universal truths wherein we can find a common language with Christians and even non-religious people.” In recent years he has joined the staff of Project Aseret, an educational movement centered on the Ten Commandments.

Visiting the Museum of the Bible in Washington, D.C., Rabbi Bergman admired its high-tech exhibits on the sacred text. In an interview, he tells why the Ten Commandments are vital in modern society — and how he responds to those who scoff at the faithful.

The Stream: When did your team begin teaching the Ten Commandments through Project Aseret? Rabbi Nitzan Bergman: About seven years ago, Rabbi Shalom Schwartz was on a quest to find a way to bridge the Jewish-Israeli society. It is very split on religious and irreligious lines. He was speaking to many people.

He consulted with Sharon Portugali, who lives on a kibbutz. She said, “Shalom, you don’t have to recreate the wheel. The foundation is there — it’s called the Ten Commandments.” She had an idea to get people today to see these ten statements as relevant.

She said, “Don’t start teaching it from, I am the Lord your God. In this secular society, you’ll lose a lot of people in the beginning.” What if we started teaching from the last one, Do not covet? Then go to Do not be a false witness, and on down. By starting there and eventually getting to explicit truths about God, they’ll be more open-minded and accepting.

Rabbi Schwartz embarked on a mission to create this. From a Jewish standpoint, that term “the Ten Commandments” is a mistranslation. The word in Hebrew is Aseret HaDibrot, or ten utterances that encompass several meanings. It’s better understood as the Ten Declarations. Each declaration has a broad meaning and is meant to be seen that way.

Professing the Wonder of Every Life

The Stream: Could you give an example of the deeper truths these teachings uncover?

Rabbi Bergman: The project evolved into looking at what’s underlying each declaration. Out of the ten, seven are “do not’s.” But each one is much more than simply a negative statement. For example, when we teach Do Not Murder, this is obviously very relevant to the world we live in. When we explore it, we find deeper meaning.

When you get to the portion of the Torah where it talks about Noah coming out of the ark, it’s almost like a repetition of what God said to Adam when he created him. I’m giving you the world, and use it wisely. But there is one difference. Adam was only given the inanimate and vegetable world, rather than the animal world. Adam was a vegetarian. He was definitely not allowed to kill animals for his use, to eat.

God says to Noah, Whereas I only gave Adam the vegetables, I am giving you the animals. Then he says: Be careful, because your fellow man I am not giving you. Man is made in the image of God. Underlying God’s command not to murder is a truth about human dignity, from which all human rights come. Each person created in the image of God has rights that need to be respected.

We do not murder because each life is precious and beautiful. To take it further, how does God call us to choose life in all things? We are to nurture spiritual, physical, intellectual, emotional and social life. The Talmud tells us, If you embarrass someone in public, it’s as if you’ve killed them. In our social lives, there are ways to nurture human dignity and respect.

What may initially seem like a “do not” message for some people is so relevant for each one of us. In the secular environment we live in, remember God’s message. It gives us a whole new view on the value and precious nature of human life, and how we should relate to it.

The Stream: Where have you had success with teaching the Ten Commandments?

Rabbi Bergman: Project Aseret is in about 40 secular schools in Israel and about a dozen religious schools in the U.S. currently. We are starting to expand into online learning. Many people desire to study the Ten Commandments in their time and at their pace.

Some participants in my classes whom you wouldn’t call “observant” are really engaging with it. Core values are part of what make us human. We are above animals. We don’t just do what we always instinctively feel like doing, which is a human quality. You have to stand for something.

These ideas are not often complicated, yet very profound. It’s really helping people. The word is where it starts. Dig deeper into it and it’s never-ending.

Reaching Across Lines That Divide

The Stream: How do you respond when you encounter people who are hostile to faith?

Rabbi Bergman: When I start speaking to them about these declarations and what’s included in them, they say: Of course, I agree with that! It’s the rest of it I disagree with.

What’s the rest of it? The rest of it are details on how to live out these values. All people have minute-to-minute lives where we have moral decisions presented to us. It’s easier to just “follow your heart’s desires,” rather than work to overcome instincts.

There is a real sense among everyone for the need to live a moral life, for the meaning that gives people. To some degree, we’ve shown how the biblical text is completely relevant.

The Stream: You’ve shown how Jews and Christians share common ground in the biblical text. Have you ventured into building friendships across faith lines?

Rabbi Bergman: In the past, I have been fearful of it. Coming to the Museum of the Bible today is a big step, and it’s an encouraging one.

I love the mission of this museum: to help people engage with the Bible. That’s what Project Aseret is doing too — giving people an opportunity to engage with these divinely ordained core values. It’s what life is about!

Explore Project Aseret to learn more about their Ten Commandments curriculum and online classes. Discover The Stream’s in-depth coverage of Museum of the Bible.