So What is the 25th Amendment Anyway? 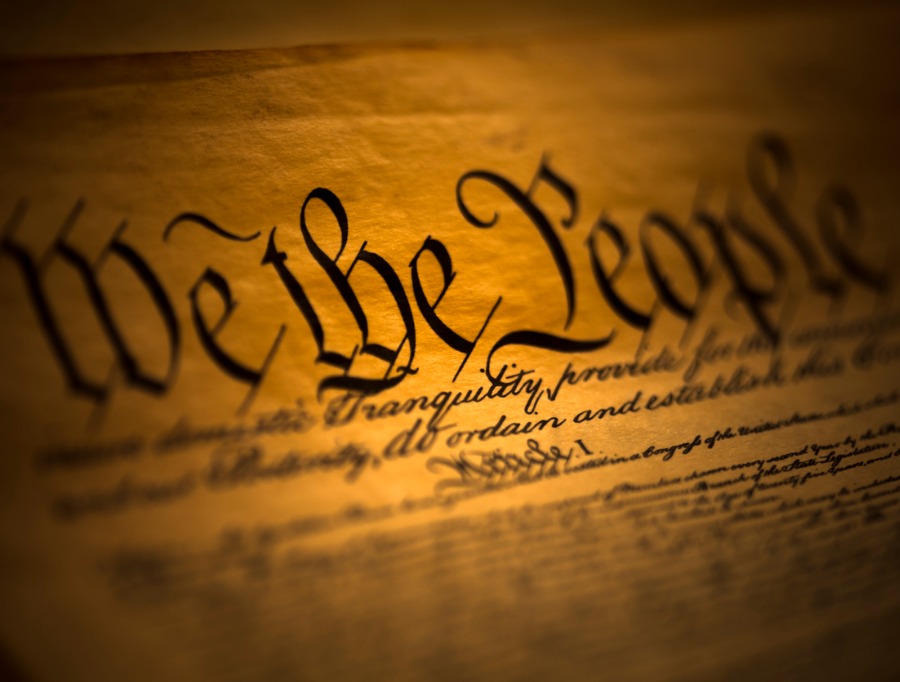 Former FBI Deputy Director Andrew McCabe made a devastating allegation Sunday night on 60 Minutes. He said Deputy Attorney General Rod Rosenstein talked about trying to use the 25th Amendment to remove Trump from office. You can read more about McCabe’s allegations here.

The founders did not want the 25th Amendment invoked to settle political differences. It’s not even to be invoked if the president has committed criminal acts. And it’s certainly not supposed to be the work of a Deputy Attorney General.

So what is the 25th Amendment? If so many news articles and tweets are talking about its misuse, we might as well be clear.

In 1967, the 25th Amendment was added to our Constitution to fix a gaping hole. Seems our Founding Fathers never really specified the details about presidential succession. The Constitution only says, “In Case of the Removal of the President, or of his Death, Resignation, or Inability to discharge the Powers and Duties of the said Office, the Same shall devolve on the Vice President.”

So, how exactly would a vice president become president should a president die, resign or be unable to perform his or her duties?

The first president to die in office was William Henry Harrison in 1841. He was replaced by John Tyler. But was John Tyler the acting president, simply discharging the powers and duties of the office? Or was he now the president? The Constitution didn’t say. Tyler insisted he was fully president, no acting about it. Though there was some resistance, this quickly became our tradition.

That was the easier question to answer. But the nation faced a harder one: What does “inability” mean? How do we define that? What happens if a president can’t do his job? Who decides? And what are we supposed to do about it?

Take President James Garfield. He was shot July 1881. Mortally wounded, he clung to life for 2 1/2 months. As Politico details, VP Chester Arthur “refused to sign presidential orders or make appointments while Garfield was still alive, fearing that they would be of dubious constitutional legitimacy whether the president survived or not.” The government was basically shut down until Garfield passed.

Take Woodrow Wilson. He suffered a massive stroke in 1919 that left him almost completely incapacitated for the remainder of his term. This time, the government didn’t come to a halt. Why? Wilson’s wife Edith and doctor Cary Grayson worked to keep the severity of his condition secret, with Edith acting as de facto president.

Grayson briefed the cabinet about Wilson’s illness, and though the question of succession was raised, the doctor refused to sign any official notice of disability. In fact, he lied. He said Wilson had nothing more than indigestion and “a depleted nervous system.”

There was nothing the Cabinet could do … even as Wilson was MIA. Even as, in PBS’s words, Edith “embarked on a bedside government that essentially excluded Wilson’s staff, the Cabinet and the Congress.”

Similarly, by 1945, Franklin D. Roosevelt was a shadow of his former self. A memo written by a doctor in the summer of ’44 doubted FDR would live out his term. In the midst of World War II, America’s commander-in-chief’s heart was failing. Southwest Texas State University’s Robbert H. Ferrell argues in his book The Dying President: Franklin D. Roosevelt 1944-1945 that FDR was too ill from cardio-vascular disease to be president. He says FDR’s illness led to a serious of misjudgments and mistakes in the final year of his life.

Later, Dwight D. Eisenhower was incapacitated three times. He did not give real authority to his VP, Richard Nixon. At these times, no presidential decision could be made even if it were needed. And we were now in the nuclear age.

All four cases made clear the need for some official mechanism for transferring power. So did the realization medical advances could keep an incapacitated leader alive a long while. After the assassination of John F. Kennedy, the effort to craft a succession solution began. In February of 1967, the 25th Amendment was ratified.

The last has been invoked three times. President Reagan once and President George W. Bush twice temporarily handed power over to their VP. Each time because they went under anesthesia for a colonoscopy.

Then the amendment takes up the really difficult problem. Its fourth section holds that

If the VP and the majority of the cabinet feel the president can’t discharge his duties, they can remove him. The VP is made acting president, until such time that the president declares no inability exists.

The problem comes if a president says he is good to go and the VP and a majority of the Cabinet say he’s not. Then the question of who is president gets fought in Congress. A 2/3rds vote of both the House and Senate is required to remove the president.

Section 4 has never been invoked. However, Andrew McCabe says he was in meetings where Rob Rosenstein talked about trying to use it to remove President Trump. Former FBI General Counsel James Baker testified McCabe gave him the impression that Rosenstein had two cabinet members on board.

And here’s where we get talk of a coup, seditious conspiracy or treason.

Remember the situation: The FBI and DOJ were in a tizzy because Trump had fired James Comey. By no stretch of the imagination would this mean Trump was “unable to discharge the powers and duties of his office.” They just didn’t like what he was doing. Or, as I argued yesterday, they knew Trump was on the march and their game was up.

So what was Rosenstein trying to do with the 25th Amendment? Make the case to cabinet members and Mike Pence that Trump was mentally incapacitated, urging them to use their Section 4 powers to send Trump packing. That would be the whole point of Rosenstein’s offer to wear a wire to secretly record conversations with Trump. Catch something on tape they could hang the mentally ill charge on.

In May of 2017, President Trump clearly discharged his duties. He continues to do so. The idea of invoking the amendment is absurd. Yet since Trump took office the mainstream media has run a steady stream of articles questioning his mental health. (Google “Trump mental illness”.) One has to wonder if these stories have been to continually lay the groundwork, especially with the Trump-Russia collusion investigation going nowhere.

Who Was In On It?

More must be learned about these discussions about invoking the 25th Amendment. Who was involved? How widespread were these discussions? Were cabinet members actually approached? Which ones? What did they say? Ultimately, were the actions of these DOJ leaders and FBI “illegal” and “treasonous”?

What is known is that rather than push to invoke section 4, Rosenstein appointed Special Counsel Robert Mueller. One reason could be tucked in the details of Section 4. If a president fights a declaration that he is unable to carry out his duties, removing him requires a 2/3rds majority vote in the House and the Senate. That’s hard to get.

What else may be hard to get? A Democratic victory in the 2020 election. Donald Trump remains the favorite. If he holds his base and the economy continues to do well? The Democrats are looking at four more years out of power.

But if Mueller finds something criminal? Or even allegedly criminal? The Democratic House will move right away to impeach the president. An impeachment vote requires only a simple majority in House. A 2/3rds majority vote in the Senate is needed to convict, but Trump’s enemies may hope that enough Republicans could be swayed to vote against him.

Pinning some “high crime or misdemeanor” on the president is a much easier way that contorting the 25th Amendment to achieve DOJ/FBI cabal’s ultimate goal: Removing the duly-elected President of the United States.

What else do we know? The Framers would be horrified.

Autopsy of a Dead Coup