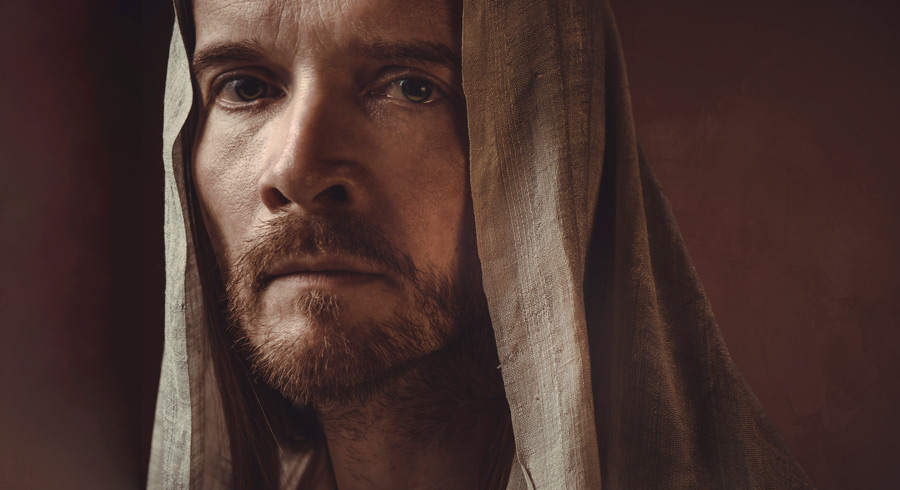 Skeptics say Jesus’ death and resurrection make no sense at all. It saddens me to see how they treat it, setting up and rejecting false, distorted versions of the gospel. It doesn’t threaten the gospel in any way, but they’re harming themselves, as well as anyone else they might persuade with.

Here’s one example. I see such things, and what I wish most of all is that I could talk with the artist/author.

I wouldn’t start out expecting them I’d persuade them to believe the miracle of Easter. I’d begin with a question about something that should be a lot easier for them to accept: “Do you really think this cartoon tells what Christians think?” Or even this: “Do you think this reveals some hidden irrationality in the gospel, that we’ve been missing all along?” 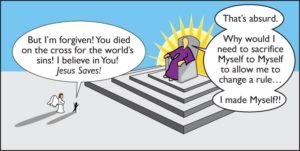 It may be expecting too much to think a committed skeptic would jump straight to belief in Christ. But maybe we can at least nudge him into recognizing there’s at least something wrong with what he believes right now.

Opening an Ear to Listen

Then I’d explain to them that the teaching in question here has to do with what’s called the atonement. The Church has discussed, debated, practically even fought over this doctrine, in parchments, books, journals, conferences, and now on websites, for very close to 2,000 years. We’ve looked at it up one side and down the other.

That ought to settle the second question I asked. There’s no hidden message suddenly uncovered by atheists; in fact, there’s no remotely reasonable view of it Christians haven’t already examined in depth.

What about my first question, though? Does this really represent what Christians think? I’d explain that the Church’s long examination of the Bible’s teaching has led us to remarkable agreement — and what we teach has nothing to do with what that cartoon.

No other worldview combines and explains all three realities: love, justice, and hope.

I’d hope that at this point the artist/author would say, “I’d rather be the kind of person who’ll tell the truth than one who will get it wrong. I’m not saying I’ll believe what you Christians teach about this, but I’m at least open to hearing what it is.”

“Fair enough,” I’d say, if we had the chance to have this kind of conversation. Then I’d accept his invitation to explain it.

The Problem Only God Could Solve

So here’s the atonement (I’d tell him or her) as most Christians today understand it.

We need to start at the beginning, to explain why we need the atonement. God created humans in His image, and He created us for a purpose. That purpose includes close, loving relationships with Him and one another. He created us with moral freedom, too: the ability to make choices with real effects in the world. In order to make it true moral freedom, God had to make it possible not only to choose right, but also to choose wrong. Otherwise human love would be meaningless, robotic.

But the first humans chose to do wrong — and their choice had real impact on the world. The effect landed on every important dimension of life: separation from God, alienation from each other, trouble in our relationship with the environment, and physical death relation to our own selves.

That’s the effect, and it has been from the beginning. In my copy of the Bible it starts on page 3. It will continue to the end of history.

So we’ve got problems. The two biggest are physical and spiritual death. The problem with physical death is obvious, except it lasts longer than skeptics might think, because God created us as forever beings. Spiritual death means separation from God, the one sole source of love, joy, beauty, and delight.

So a forever being — someone like you or me — who’s separated from God will forever be separated from everything that brings light to life. We all get to enjoy some of His love on Earth, but that doesn’t last beyond death.

God is famously known as a God of love, and it’s true of Him. But He’s also a God of justice. Therefore He can’t just say, “Aw, shucks, it doesn’t matter. Y’all can forget that I created you so your choices actually make a difference in the world. I’ll give you a free pass to the good stuff no matter what you do.”

No, disobedience must have its effect, including physical and spiritual death. That’s the price we owe for it, and it must be paid. Simply to ignore it would be unjust. That’s why I say, we’ve got problems. Problems we can’t solve. Problems that can’t be solved unless God solves them. But He has to do it in a way that satisfies both His love and His justice.

He’s also a God of justice. Therefore He can’t just say, “Aw, shucks, it doesn’t matter. Y’all can forget that I created you so your choices actually make a difference in the world. I’ll give you a free pass to the good stuff no matter what you do.”

Thank God He has that answer! It’s centered right here in this Easter weekend. Jesus sacrificed His life to pay the penalty for our sins. He suffered in our place. The Bible says, “He bore our sins on the tree,” meaning, the Cross.

I can’t explain how our sins could be transferred to Jesus. But we don’t have to understand everything about the gospel. Humans believe lots of things we can’t fully explain.

I do know this, though: Jesus is great enough to carry all our sins. He is God, the Second Person of the Trinity. His death was sufficient to satisfy the justice of God and free us of sin’s penalty. Thus God solved our problem, and He did it without changing His rules, as the cartoon alleges. And because Jesus defeated death, we can look forward to life with our loving God forever.

No Such Absurdity: God’s Reasonable Solution

Now, you might think this means we have a free pass to do whatever we want. Not so. There’s one way to get the benefit of Jesus’ death for our sins, and that’s simply to trust Him. The Bible makes it clear that if we do that, it’ll show in our lives.

That’s what God did for us. And for one who thinks it’s as absurd as the cartoon says, here’s the real surprise: It’s the most sensible, reasonable view of life you can find.

Here’s why. Do you think you have the freedom to make moral choices? Of course you do. Do you think your choices matter? They must. And do you believe justice would call for penalties for doing wrong? But wouldn’t you hope there could be mercy as well?

Christianity explains all this. Justice comes from a perfectly good, just God, who is also perfectly loving. The atonement gives Him freedom to forgive in love, without violating justice. And this gives us room to hope. No other worldview combines and explains all three realities: love, justice, and hope. In fact, Easter gives us real reason to hope for God’s goodness in our lives to last forever!

That’s what I’d want to tell this artist/author, if he or she was willing to listen. Then I’d turn it over to them with a question. “You can reject an absurdly distorted version, but why would you ever want to do that? Why not consider accepting the real thing?”